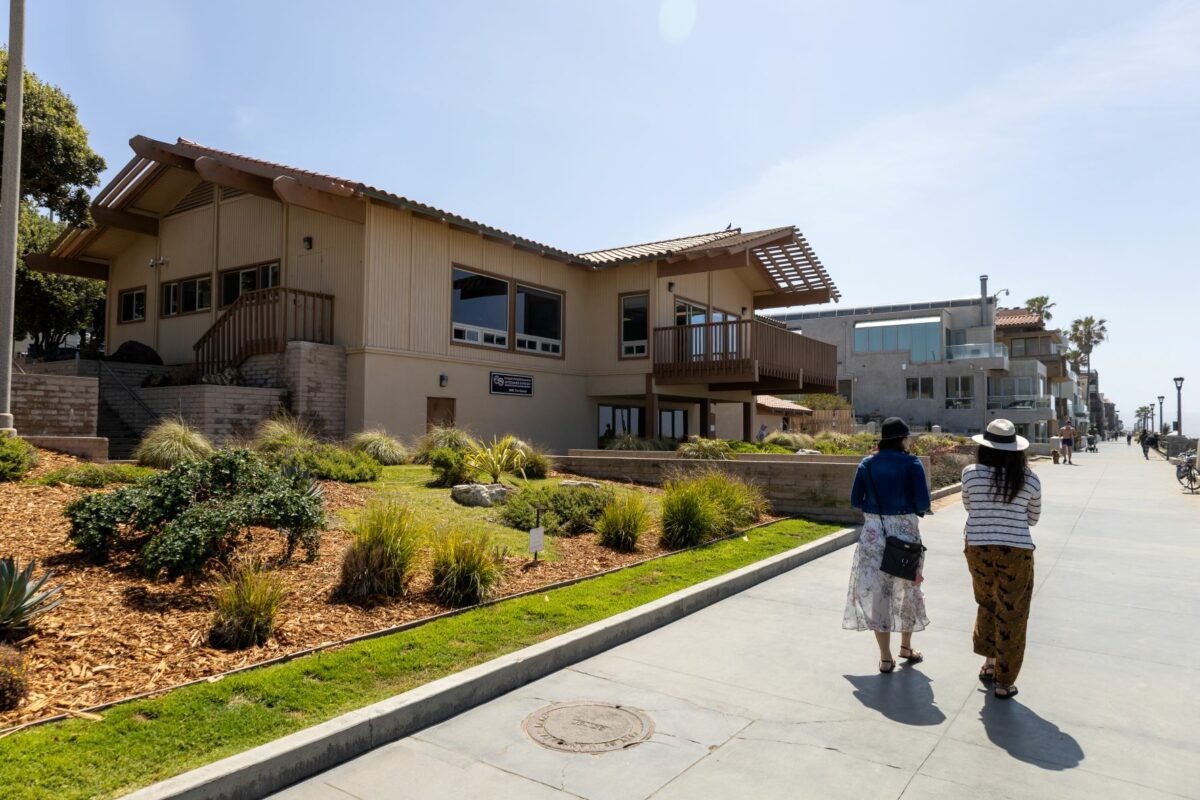 The site where Bruce’s Beach was historically located, at 26th and the Strand in Manhattan Beach, is currently in use as an LA County Lifeguard administrative building. Photo by Kevin Cody

A legal attempt to block the land transfer at Bruce’s Beach was rejected this week by a Superior Court judge who ruled that returning the land to descendents of the Bruce family does not constitute a gift of public funds.

Joseph Ryan, an attorney from Palos Verdes Estates, filed a complaint with the court in November seeking an injunction against the Los Angeles County Board of Supervisors. Ryan argued the land transfer does not serve a public purpose and the state law recently enacted to enable it, S.B. 796, is therefore unconstitutional under California law. The Bruce family joined the County in defending against the lawsuit.

Judge Mitchell Beckloff, in a ruling issued April 14, rejected Ryan’s argument, paving the way for the land transfer. The Bruce’s are expected to take ownership of the land within months. The judge wrote that redressing a past governent wrong in order to remedy racial discrimination serves a public purpose.

“Righting a government wrong perpetrated in breach of our core and fundamental constitutional principles works to strengthen governmental integrity, represents accountability in government and works to eliminate structural racism and bias,” Beckloff wrote. “The government’s act of rectifying a prior egregious wrong based on racism fosters trust and respect in government.”

The history and potential reconciliation of the land has been in the spotlight since the activist movement Justice for Bruce’s Beach arose two years ago, and earned the attention of Supervisor Janice Hahn, who prior to recent redistricting represented the area.

In 1912, Charles and Willa Bruce purchased the beachfront property and built a small resort catering to the Black community throughout Los Angeles. They faced immediate backlash from their neighbors, including one of the city’s founders, George Peck, who on the first Sunday after the opening of Bruce’s Lodge placed constables and barriers on the beach that required Black beachgoers to walk a half-mile to reach the ocean. The Bruces nevertheless built a thriving business and attracted a small community of other Black homeowners on the same block over the next decade. In 1927, the City utilized the power of eminent domain to acquire the land, at market value, from the Bruces and the other Black families, as well as from adjacent white property owners who had not built on their parcels. The City of Manhattan Beach’s History Advisory Board uncovered correspondence from city leaders at the time and a later admission by a former member of the city’s Board of Trustees showing that the taking of the land had been racially motivated.

Beckloff referenced this history in his ruling, writing that “…where the government finds it previously acted as the perpetrator of racial discrimination to deprive its citizens of its property, public trust in our institutions and democracy is severely damaged. As argued by the Board during the hearing, redressing past acts of discrimination as well as preventing such acts in the future benefits the whole of the community and its general welfare. The public purpose served by SB 796 is direct and substantial.”

Hahn said the judge’s ruling was unsurprising, but gratifying.

“When we return this property to the Bruce family, we will be making history and righting a century-old injustice,” she said. “I was not surprised when a lawsuit was filed to try to stop us, but I am also not surprised that the judge ruled in our favor. His ruling is powerful and speaks to why our effort to return Bruce’s Beach is not only lawful, but will rebuild trust in government and help repair the damage done by this historic injustice.“

Ryan did not respond to a request for comment. He drew attention four years ago for his practice of raising Confederate battle flags over his PVE home, which upset some neighbors. He is a Civil War buff who publishes a blog called “Joe Ryan’s American Civil War.” In a 2018 Daily Breeze article about his Confederate flags, Ryan noted that he also flies Union flags and said that he was simply trying to bring attention to the racial underpinnings of American history.

“I don’t really give a damn about the politics of liberal idiots who want to look at that flag and say, ‘Oh that’s racist,'” Ryan told the Daily Breeze. “The last person you can call a racist is me.”

Ryan argued that the land transfer violated the California Constitution and referenced a California Supreme Court ruling in an 1893 case called Conklin vs. the Board of Supervisors.

“An appropriation of money by the legislature for the relief of one who has no legal claim therefor must be regarded as a gift…and it is nonetheless a gift that a sufficient motive appears for its appropriation, if the motive does not rest upon valid consideration,” the 1893 Supreme Court ruling reads, adding that “moral considerations or demands resting merely upon some equitable consideration or idea of justice, which in an individual acting in his own right would be upheld, are insufficient as basis for making an appropriation of public moneys.”

Judge Beckloff wrote the Supreme Court has also established that there is no gift of public property “if a direct and substantial public purpose is served and non-state entities are benefited only as an incident to the public purpose.” He also said that this case is different from the Conklin case because government wrongdoing was not at issue.

“In contrast, as to the Bruces’, the Legislature found the City had committed a grievous act of racial discrimination to eliminate the Bruces’ presence (and the presence of their Black patrons) at the beach in the City,” he wrote. “It used its police power of eminent domain to condemn Bruce’s Beach under ‘the pretense of building a park.’ The Legislature found the true purpose for condemning the land was illegitimate and an act of racial discrimination — clearly not a legitimate public use under the Takings Clause.”

An appeal seems likely. The judge acknowledged as much at the end of his 15 page ruling. “Petitioner’s request for a stay is denied,” he wrote. “While the Board prepares the judgment, Petitioner has sufficient time to prepare to prosecute his appeal.”

“Judge Beckloff’s ruling affirms the right of the State and County to return the property to the Bruce heirs in recognition of the grave injustice committed 100 years ago,” Estrada said. “We are heartened by the Court’s decision and hope that there will be no further delays in this historic and long overdue return of Bruce’s Beach to the Bruce family.”

“We have been patiently waiting to get our family’s property returned and are grateful to the Court for its decision,” said Duane Yellow Feather Shepard, a relative of the Bruce family who has served as their spokesperson. “We call on the County to act promptly, to take another historic step and return the property to the Charles and Willa Bruce family without further delay.” ER