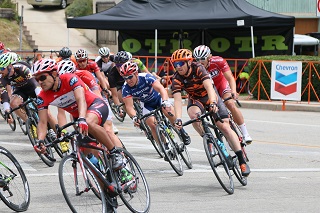 The hairpin turn at 15th Street before the finish line at the Manhattan Beach Grand Prix will be the first turn made this year as the direction of the course is reversed. Photo

For years, cyclists competing in the Manhattan Beach Grand Prix (MBGP) have jockeyed for position on the final hill on Ardmore Avenue before entering the final tight turn at 15th Street that led to a short straightaway to the finish line.

This year, the 1.3-mile course will take on a new look. The course is being reversed and the racers will hit the hairpin turn at the beginning of the race.

The race was founded by local bike legend Ted Ernst in 1961 and benefits the South Bay Wheelmen Foundation, a charitable organization supporting amateur cycling competition at all levels. The 56th Annual Chevron Manhattan Beach Grand Prix begins at 7 a.m. on Sunday July 30. Pro racers from across the United States begin competition at 2 p.m.

“We have had a huge resurgence with Junior/under-19 racing and the Chevron Kids Zone is more successful than ever,” South Bay Wheelmen President Matt Gorski said. “We are expecting record crowds. The race will also serve as a championship for some of the age groups.”

The professional men and professional women will have equal prize purses. Justin Williams, of Los Angeles, and Kimberly Lucie, of Tucson, Ariz. are reigning champions. This year’s race will serve as the State of California Women’s Elite Criterium Championship and as the final SoCal Cup Men’s Race.

The popular Community Kids bicycle racing from tricycles and strider cycles to pre teen groups, takes place at 12 p.m. Every entrant receives a goodie bag and an award medal.

For more information and to register, visit mbgp.com.