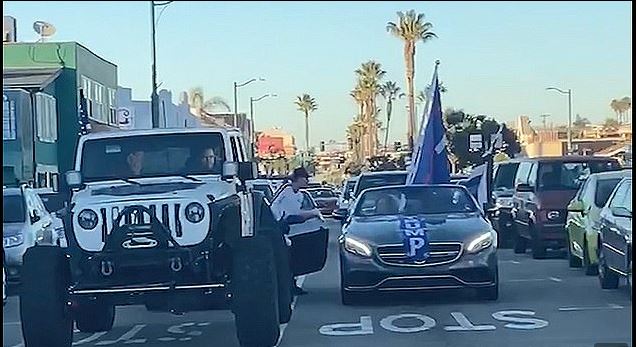 An apparent road rage incident in downtown Hermosa Beach on Thanksgiving weekend ended with a 13-month-old child trapped in an overturned black Ford Mustang after it collided with a Jeep displaying a large Trump flag.

The accident was captured on tape by Hermosa Beach resident Lauren Purcell who was walking to the beach with her husband, Cameron Purcell.

“We were walking across the street and we saw the tension starting to build up and I just started recording.”

In the video, originally released by TMZ, the driver of the black Mustang is seen getting out of his car to argue with the occupants of a black Mercedes convertible while their cars are stopped at the Hermosa Avenue and 8th Street stop sign. The Mercedes and the white Jeep, stopped behind the Mercedes, are both flying large Trump flags.

“[The driver of the Mustang] was saying ‘Get the f… out of here,” Purcell said. “Yelling at them to go away and that they didn’t belong here.”

The video then shows the three cars proceeding south on Hermosa Avenue when the driver of the black Mustang attempts to pass the white Jeep in the left lane, at the same time as the Jeep swings into the left lane. The black Mustang accelerates, and becomes pinned between the Jeep and cars parked on the traffic island, before flipping onto its roof.

According to Hermosa Beach police, the male driver of the Mustang, a female passenger and a 13-month-old baby in the back seat were trapped in the car. A city light pole was also damaged in the wreck.

“My husband went running towards the car and he helped get them out,” Purcell said.

Purcell said she saw the female passenger crawl out of the overturned Mustang, screaming “my baby, my baby.”

“[My husband] helped pull her out,” Purcell said. “The driver and the baby were still stuck in the car and the car was starting to smoke. My husband was worried it would catch on fire. It didn’t, and he was able to help get the baby out and the baby seemed okay. It had some blood. But it seemed to have been okay.”

Hermosa Beach police said the accident appears to be an isolated incident and that traffic investigators are seeking information regarding the crash. No citations have been issued and no information has been released on the condition of the passengers in the Mustang. Tips should be submitted to Detective Sergeant Eric Callahan at (310)318-0360 or emailed to ecahalan@hermosabeach.gov.ER