Earthquake beach – When will the Big One strike here? 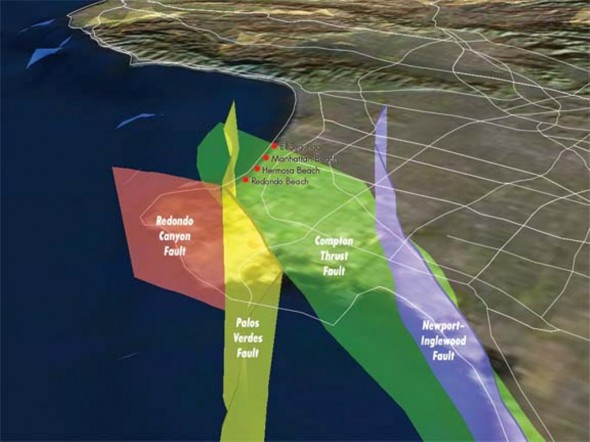 As massive earthquakes strike Haiti and Chile, and cautious officials issue tsunami advisories even on our own local shores, the question resurfaces: When will the Big One strike here?

Top seismologists warn that a great quake, one measuring 7.5 or greater on the Richter scale, is sure to one day shake Southern California with a destructive force much greater than that of Hurricane Katrina. The Big One, they say, will make the 1971 San Fernando Valley Earthquake and the 1994 Northridge Earthquake look like fender benders.

Speculation about the looming great quake tends to focus upon the southern section of the San Andreas Fault, which experts say is long overdue for a shaker in the 7.8 range or higher that could lay waste to much of the area with an initial shock lasting minutes, not just seconds.

But other Big Ones may lurk below our own geologically-fragile area, waiting to roar up from a number of smaller faults that snake underground around the South Bay. While these faults might not be as famous or as publicized as the mighty San Andreas, they could still produce a damaging earthquake almost as impressive as the granddaddy fault.

A small 4.7 magnitude quake on the Newport Inglewood fault that rattled the South Bay last May drew little media attention, but it alarmed seismologists because it occurred on one of the most dangerous “thrust faults” near the South Bay.

A number of thrust faults – in which the earth’s plates ride on top of one another rather than side by side – underlie the Los Angeles basin. Like the Newport Inglewood, many of the thrust faults run nearby or directly underneath the beach cities.

The Newport Inglewood is also the fault responsible for a 6.4 magnitude Long Beach earthquake that took 115 lives and caused some $50 million in property damage in 1933, prompting more stringent building codes within our seismically active state.

Susan Hough, a seismologist with the U.S. Geological Survey in Pasadena, keeps a wary eye on the fault, which runs roughly from Newport Beach to Beverly Hills. She and other seismologists believe the fault zone is capable of producing a Big One of 7.5 on the Richter scale. The magnitude would be dependent on just how much of the fault moves during any given event.

A 7.5 earthquake along the dangerous fracture would cause intense shaking throughout the Los Angeles basin, including the South Bay, for as long as a minute, and possibly longer.

Residents would then have to contend with numerous aftershocks, at least one of which would measure merely one unit less in magnitude than the main temblor. The aftershocks would subside in number as the days go by and, normally, decrease in size.

Tom Henyey, professor emeritus in the Earth Sciences Department at USC and retired director of the Southern California Earthquake Center, also casts a wary eye on the Newport Inglewood Fault.

“We know it’s active, and has moved before,” he said.

And because there is a lot of younger rock underlying our area — with large segments of communities built over old sand dunes — the shaking from the Big One on the San Andreas or a nearby fault, like the Newport Inglewood, would be greatly exacerbated.

“The beach cities have folds of sediment that would just magnify the shaking. And there could be landslide issues along hillsides,” Hough said.

Concerns about the Newport Inglewood Fault have grown since the small event in the spring of last year, with its epicenter near Lennox.

“We are pretty certain that the quake occurred on the Newport Inglewood fault,” Hough said.

Was the quake a foreshock to something bigger? While statistical averages indicate that a foreshock usually occurs within a 48-hour to five-day window of a major temblor, the 1989 San Francisco quake proved there are exceptions to this general rule.

One year before the deadly World Series Earthquake struck Northern California in 1989, a 5.0 earthquake occurred near the main temblor’s epicenter. So the possibility that the northern section of the Newport Inglewood is getting ready to premiere a bigger attraction can’t be totally dismissed, and seismologists are continuing to monitor it closely for any other evidence that might indicate it’s getting ready to rock and roll.

“Any time you have an earthquake on a given fault, you have the possibility of having more earthquakes in the near future,” Hough said.

The San Fernando Valley’s 1994 Northridge quake, one of the largest and most damaging quakes to hit an urban area of North America in recent geological history, occurred on one of those puzzling and infamous blind-thrust faults. When it unleashed its 25 seconds of fury on that fateful morning of Jan. 17, 1994, it killed 72 people, injured 9,000 and caused an estimated $20 billion in property damage, making it one of the costliest natural disasters in U.S. history.

Trouble on the hill

To the west of the Newport Inglewood Fault, running along the Palos Verdes Peninsula, is the equally disturbing Palos Verdes Fault. The fault sprints along the hills of the peninsula and extends out to sea along Hermosa and Manhattan Beach. Based on the length of the fault, seismologists like Hough believe that it too could produce an earthquake as high as magnitude 7.0.

Other faults running through the South Bay area are the Redondo Canyon and Torrance Wilmington thrust faults, both of which are capable of generating quakes in the 6.0 to 6.5 range. While geologists consider them active, they don’t know when they might have last ruptured. Nevertheless, they are capable of causing significant damage if and when they snap.

“There is the possibility that any significant-sized earthquake on the Palos Verdes Fault could trigger another large or larger earthquake on an offshore fault like the lengthy Coronado fault zone,” Hough warned. She said that would create an entirely different and possibly more dangerous and complex scenario.

Meanwhile, if the Redondo Canyon Fault – which lies just offshore of the South Bay – should come alive and produce a seismic event, it, too, could trigger an earthquake on the PV fault zone.

Henyey, a Palos Verdes resident, has closely studied the Palos Verdes Fault and has determined that its slip rate is occurring at three to four millimeters a year. And with each year that passes – with minimal slippage along the fault – the chances increase that any seismic event that does occur could reach a higher magnitude.

The southern tip of the Palos Verdes Fault runs offshore into the Los Angeles Harbor, crosses the San Pedro shelf, bypassing the oil platforms, and then dives into deeper water continuing about two thirds of the way to San Diego.

But according to Henyey, the northern section is a bit more perplexing. What he does know is this: The northern section of the fault runs from Rat Beach and continues offshore into Manhattan Beach, angling towards the Malibu area, where it might connect with or butt up against another dangerously troublesome fault: the Santa Monica.

“There are very few earthquakes that we can pin on the PV Fault. The geology is so complicated. Much of the fault zone has been covered up by development,” Henyey said.

“Small earthquakes of magnitude 2.0 to 3.5 have had their epicenters in the South Bay area since the 1950s that may or may not have occurred on the PV Fault,” he said. “But to our knowledge there hasn’t been a significant-sized earthquake on the fault in the past 500 years – but then, our data only goes back that far.”

Like his fellow earthquake hunters,  Henyey remains most concerned with the San Andreas Fault, particularly the section near Palm Springs, where the stress has built up to a level that makes a major earthquake inevitable – something earth scientists have been warning us about for years.

Dr. Egill Hauksson, seismologist and senior research associate in geophysics at the USGS, believes that another fault, the Compton Fault, is also capable of producing a magnitude 7.0 earthquake. Recent research has indicated that there have been at least six magnitude 7.0 to 7.4 earthquakes on that fault within the last 14,000 years, and some seismologists believe that the last slippage along the fault zone was as recent as the last 700 to 1,400 years.

But Hauksson, like many of his colleagues, is most concerned with the southern section of the San Andreas, near the Coachella Valley in Palm Springs. He foresees a possible earthquake of 7.8 if enough of the fault slips at one time.

And he thinks that the destruction could be as great, in some areas of Los Angeles, as was seen in most sections of Haiti: a disturbing scenario in spite of the fact that California has some of the most stringent seismic building codes in the world. We simply have not experienced the worst case scenario earthquake, yet, to know just how well most structures will hold up.

“We could have high rise buildings in downtown Los Angeles collapsing,” he warned.

It is not a matter of if that great earthquake occurs, but when.

Hough, who is also author of a new book on earthquakes, Predicting the Unpredictable, said, “Since the time geologists first came down to the area in the 1920s, leading scientists have been making predictions that the state would be rocked by a major quake.

“It is going to happen some day. That much we can say with certainty. It may not happen for another 30 years, or it could happen tomorrow. We live in earthquake country. The Los Angeles area was built on top of many huge faults. And when it comes to earthquakes, there is no place to hide in California.”

Hough suggests that Southern Californians maintain an adequate supply of bottled water, canned food and extra flashlights because a major quake on the San Andreas or any of its sister faults could interrupt the water supply for as long as a month or more, with other utilities being indefinitely affected.