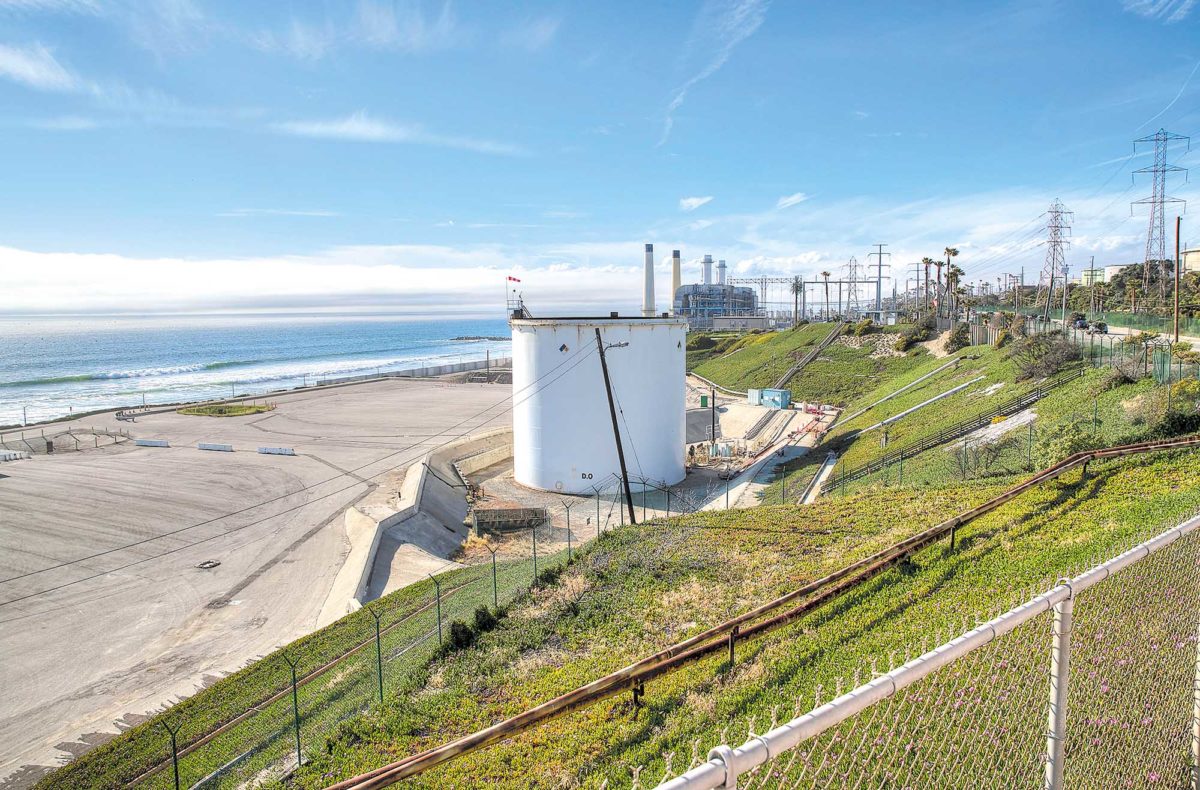 The West Basin Municipal Water District on Wednesday released the much anticipated Environmental Impact Report for the ocean water desalination plant it has proposed in El Segundo.

The report, required by state and federal law, does not differ significantly from a draft version released 18 months ago. But its release is a significant step towards West Basin’s goal of constructing a desalination plant on the 33-acre El Segundo Generating Station site currently operated by NRG in El Segundo, just north of the Manhattan Beach border. Like the draft report, the final EIR finds that the environmental impacts of the proposed facility are “less than significant” and thus legally compliant.

Patrick Sheilds, West Basin’s general manager, told the Manhattan Beach City Council at its Oct. 15 meeting that the need for the desalinization is fundamentally about securing a reliable local source of water for a future rife with challenges to Southern California’s already precarious water supplies.

“All of this is to secure a water supply for the future, a reliable one,” Sheilds said. “That’s what all of this is about —  recycled water, water conservation, or ocean desalinization.”

The proposed facility has met opposition from both local environmental groups and the cities of Hermosa Beach and Manhattan Beach, both who filed formal letters opposing it in 2016, even before the Draft Environmental Impact Report was released that year.

That was a different City Council. No councilmembers spoke for or against the proposed facility last week, but a few did express a willingness to consider the proposal.

“I want to personally apologize to you and our fellow elected board members at West Basin that you were not allowed the chance to present the information in 2015,” Councilperson Richard Montgomery said. “A prior council made that decision. We are not that council. We want to see both sides of any argument, and want both sides of any issue….This council has not taken a position yet on anything to do with desal.”

Sheilds, who took over as West Basin general manager last year after serving as executive director of the Irvine Ranch Water District, which notably has utilized Tesla batteries and solar panels to reduce its carbon footprint in supplying water. One of the biggest criticisms desalination faces is its energy use.

In his presentation, Sheilds emphasized the environmental track record of West Basin, the unreliability of a water supply currently dependent on imported water, the improved technology of desalinization, and plans to offset the carbon footprint of the proposed facility with renewable energy use.

West Basin, which supplies water to nearly a million residents in 17 cities, is widely lauded for its environmental track record, largely due to water conservation programs and especially its pioneering efforts at recycling wastewater into potable water. Water conservation efforts represent 16 percent of the water West Basin supplies, according to Sheilds, while recycled water now accounts for 9 percent, or 200 billion gallons of water.

“That’s 200 billion gallons of water we did not have to import, a big game-changer,” Sheilds said, noting that the recycling program was launched a quarter-century ago in response to California’s droughts. “West Basin’s answer was in terms of leadership and vision and response, which was to start the recycled water program. It’s regionally, nationally, and world-renowned. That’s not an idle boast. It’s been a model for a lot of other programs.”

Sheilds said that when West Basin was formed in 1947 the area still relied on groundwater supplies, but as the population grew the aquifer was overpumped and ocean water seeped in, largely rendering groundwater useless. By 1990, 80 percent of water was imported, from both the 444 mile California Aquaduct and the 242 mile Colorado River Aquaduct. Through West Basin’s efforts to reclaim more local water from conservation and recycling, Sheilds said, imported water now accounts for only 55 percent of overall local water supplies. Revived groundwater sources account for 19 percent and brackish water desalinization 1 percent.

The proposed desalinization plant is projected to supply 10 percent. Sheilds said developing desalinization is vital because imported sources are increasingly under threat.

“We are faced with ever-increasing droughts, in terms of intensity and frequency, record temperatures, and wildfires,” Sheilds said, noting that both aqueducts also cross the San Andreas fault. “Any kind of major earthquake could interrupt that supply of water for up to two years. That sounds alarmist, but that is in [Metropolitan Water District] studies.”

Even without a natural disaster, Sheilds said, both the Colorado and California aqueducts cannot be relied upon — the former is shared with six other states and the Republic of Mexico and is “already over-allocated,” he said, while the latter depends on another diminishing source.

“The Sierra snowpack is in fact the largest reservoir for water in the state and that is under increasing duress due to climate change and other factors,” Sheilds said.

Sheilds said that the proposed facility would utilize state-of-the-art technology that would minimize environmental impacts, including a low-velocity intake system with 1-millimeter screens that would keep marine life from being pulled in and brine-output diffuser technology that would not toxify the areas when salt is reinjected into the ocean. He said West Basin’s desalinization demonstration project in Redondo Beach has helped prove the new technologies.

“There is a huge amount of technical and scientific evidence out there demonstrating the impacts on the marine environment,” Sheilds said. “We are talking about taking that to the next level.”

The West Basin Board of Directors has scheduled a special meeting to consider the EIR on Nov. 18. The project faces significant opposition, both from local environmental groups and municipalities. The EIR included letters from eight of the 17 cities served by West Basin, including five letters opposing the project from Redondo Beach, Hermosa Beach, Malibu, Carson, and Culver City. El Segundo, Hawthorne, and Manhattan Beach all submitted letters that were neutral on the project overall, although Manhattan Beach City Attorney Quinn Barrow’s letter suggested that the draft EIR was insufficient and needed to be revisited before an EIR could be completed, leaving the door open for the city to oppose the EIR. The main recourse any of the cities have in opposing the project would be to file lawsuits challenging the validity of the EIR. Only the West Basin board has a vote on the matter.

Opposition largely centers around arguments that water conservation and recycling are the best way to increase local sourcing of water, and that the environmental impact of the proposed facility is understated by the EIR.

Bob Sievers, the unofficial “mayor of El Porto,” the area of Manhattan Beach nearest the proposed facility, submitted a letter indicating the neighborhood would fight the project tooth and nail.

“You are proposing to put a costly, environmentally unfriendly plant right on top of my neighborhood,” Sievers wrote. “We know the huge contracts are what is driving this thing….We surf at this beach and do not want brine and algae in the ocean you should be concerned with protecting. We will speak and speak loudly. Of course you want your shiny new offices here by the beach rather than their present location. We are on to you, and will all stand together to stop this at all costs.”