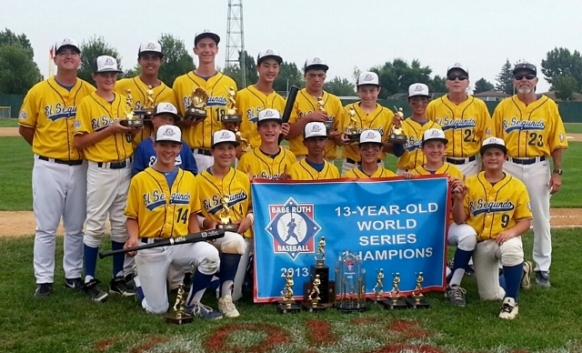 The win marked El Segundo’s first World Series championship in 11 years, its fifth overall and the first at the 13-year-old level.

El Segundo’s Joey Acosta was named the tournament’s Most Valuable Player after batting .680 (17-for-25) and winning two games as a pitcher. His 375-foot home run in the third inning gave El Segundo a 3-1 lead.

“I fell really honored to win the MVP,” said Acosta, a resident of Manhattan Beach. “We won it with pitching and defense. Our defense was great in the championship game.”

Spencer Long and Spencer Song were selected to the All-World Series Team and Sean Emery was named to the tournament’s All-Defensive Team.

With a deep pitching staff to choose from, El Segundo head coach Bob Motta opted to start Long in the championship game. Long struck out five batters while surrendering only two hits that led to the Southeast Regional champion’s only run in the third inning.

“I was a little nervous but I knew our offense would carry us,” Long admitted. “Losing never entered our minds. Fortunately, I had great control of my fastball and my curveball was breaking well.”

Long, who is preparing to begin his prep career at El Segundo High School this week, was excited about making the All-World Series Team.

“It’s nice to be known as one of the better players,” Long said. “There were many good teams with talented players.”

“The adrenaline had been flowing from the time we got to the stadium until we scored that last run,” Motta added.

Song said he and his teammates will always have fond memories of the summer of 2013.

“Playing in the World Series was a once in a lifetime experience,” said Song, a recent graduate of Parras Middle School in Redondo Beach who will be attending Loyola High School. “It was awesome to make the all-tournament team. It feels good to be able to help out the team.”

Acosta and Long felt Oregon was the toughest team they faced during the All-Star season. El Segundo scored six runs on five hits in the top of the seventh inning to take the lead.

“We didn’t play that well against Oregon,” Song said. “Coventry was a solid team with good hitting throughout the batting order. Their fielding was very good and they had decent pitching.”

Players stayed with a host family during the week-long tournament.

“Nico Celestial and I stayed with host parent Jenny Miller who made us feel so welcome,” Acosta said.

“I’ll remember how nice the field was,” Long added. “The grounds crew did a great job.”

Special thanks to correspondent Gregg McMullin.