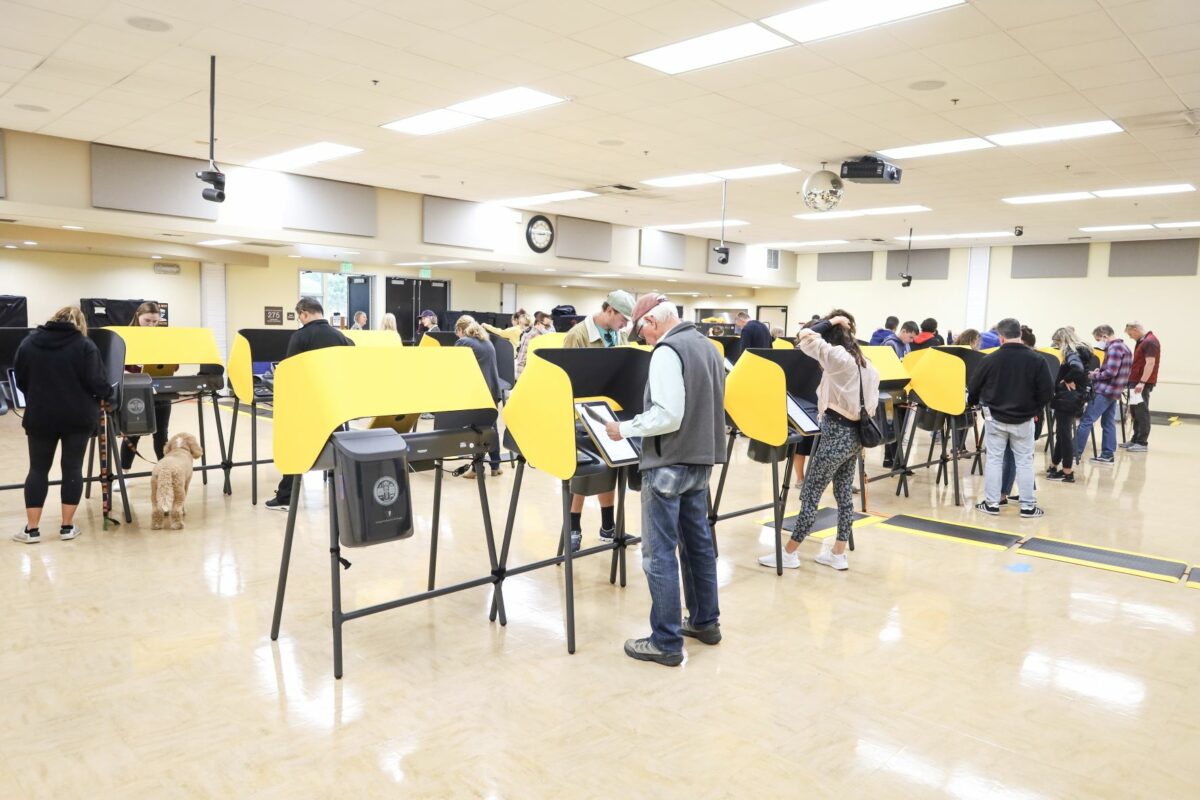 Voters fill polling stations on Tuesday at Joslyn Center in Manhattan Beach, suggesting a strong voter turnout. Mail in ballots will be counted through November 15. The next voter update is Friday, November 11. Photo by Kevin Cody

A momentous election season in which potential majorities were at stake on both the City Council and the Board of Education ended Tuesday night with former councilpersons Amy Howorth and David Lesser appearing to have regained their seats on the City Council, while Jen Fenton, Tina Shivpuri, and Wysh Weinstein held large leads over the “Trifecta” school board candidate slate.

Vote counting was still underway Wednesday and results will not be certified until December 5. But early results showed a strong likelihood of Wednesday’s leads holding in both races.

Measure MB, which would have legalized three cannabis dispensaries in Manhattan Beach, was soundly defeated Tuesday night. The City’s Measure V, upholding a ban on such shops, won in a landslide. Courtesy the LA County Registrar-Recorder

Measure MB, a cannabis industry initiative that sought to allow three dispensaries in Manhattan Beach, lost in a landslide, with 78 percent of voters opposing it and 68 percent voting for Measure V to uphold the City’s ban on cannabis stores. 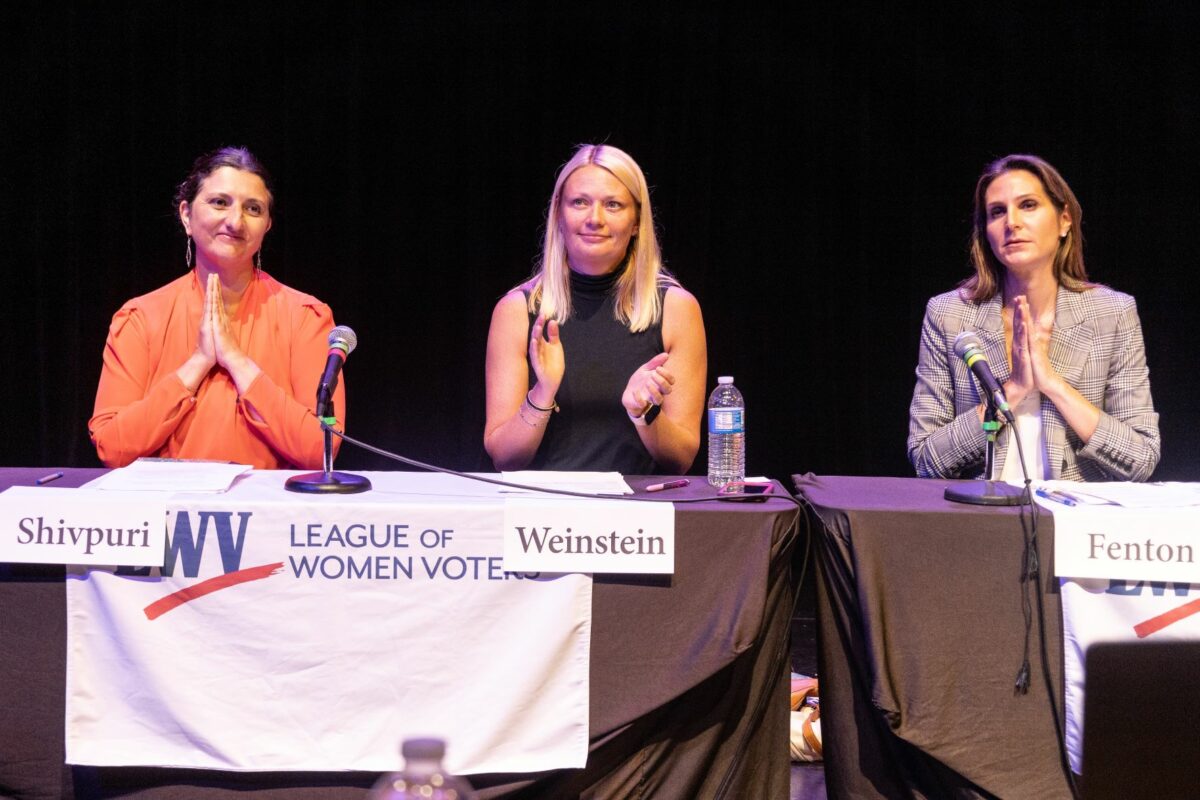 Newly elected Manhattan School Board Candidates Tina Shivpuri, and Wysh
Weinstein, and re elected School Board Member Jan Fenton at a candidates forum hosted by the League of Women Voters and Easy Reader at Mira Costa High in September. Photo by Kevin Cody

Fenton, the only incumbent running for school board,  was leading all candidates with 4,950 votes, followed by Shivpuri with 4,713, and Weinstein with 4,413. The leading Trifecta candidate, Christy Barnes, trailed by nearly 1,100 votes.

“As the final ballots are counted, I remain cautiously optimistic,” Fenton said. “I am grateful to the residents who both voted in this election and voiced their support. Our schools and community are truly exceptional. It has been an honor serving the residents of Manhattan Beach for the past four years. I look forward to building upon this excellence.”

Shivpuri, a mathematician, and newcomer to the political arena, was inspired by her son’s activism at Mira Costa High School to enter the race. She said she was hopeful the results would hold up, but was satisfied either way with her campaign.

“What I said last night to the group that was gathered, to my team, was that I had in mind my work background, and that every project needs to have a process,” she said. “What you learn and what you do along the way is the most important part. The results sometimes you don’t have control over. So I kept my head up while at the same time keeping my head down…I am prepared to lose, and I am prepared to win.” 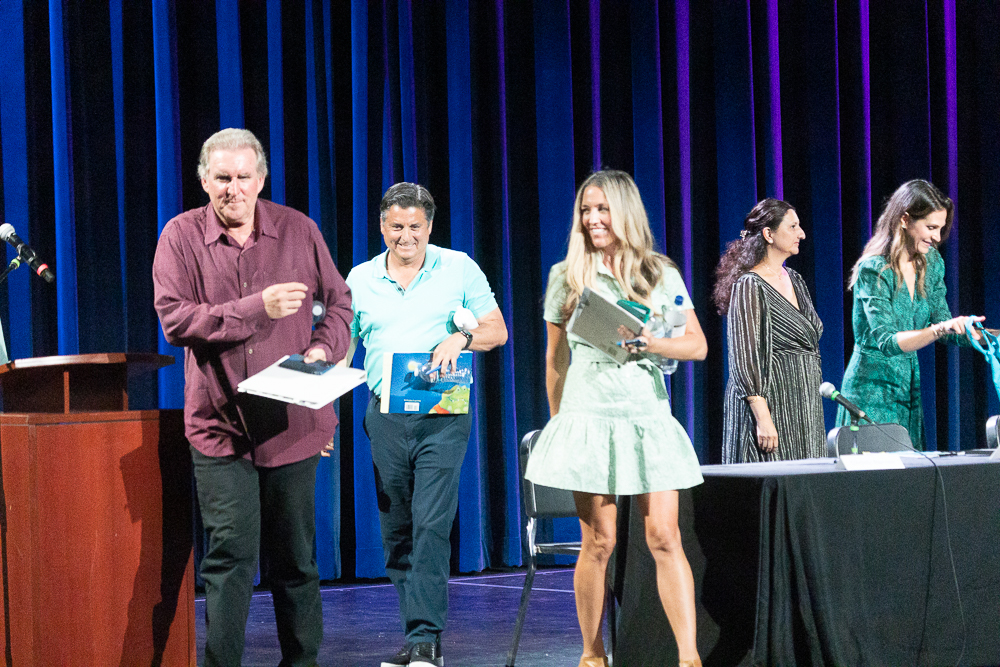 Members of the Trifecta slate of candidates for the Manhattan Beach Unified School District Board of Education leave the stage at the Mira Costa High School auditorium following a candidates forum in September (left to right) Mike Welsh, Johnny Uriostegui, and Christy Barnes. In the background are candidates Jen Fenton and Tina Shivpuri. Photos by Kevin Cody

Howorth led the council race, in which seven candidates were competing for two seats, with 4,030 votes. Lesser was second with 3,969 votes, with incumbent Suzanne Hadley trailing by 653 votes through midday Wednesday.

Election signs for four of the likely winners in the November 8th election in Manhattan Beach. Photos by Kevin Cody

“I’m very gratified that the residents responded to my message of getting things done, as well as to the fact that I’ve done a good job in the past,” said Howorth, who served on the council from 2011 to 2019. “It’s very personally gratifying.”

“There are still many ballots to be counted, but I’m humbled by the support I’ve received so far,” he said. “I hope residents have responded to the message of seeking greater collaboration, which is what I very much want to bring back to the council.”

Hadley did not concede defeat.

“It’s halftime, and I’m a little behind. But there’s a lot of football left to play,” she said. “We won’t know the final score until all the votes are counted. I trust the voters of Manhattan Beach. We’ll see what happens over the next week.”

If results hold up and Hadley loses, it would represent something of an upset, although both Lesser and Howorth are experienced, successful campaigners. At the last filing date, Hadley had raised $81,000, the most money raised by a single candidate for a local race in recent Manhattan Beach history. Hadley also threw her support behind the Trifecta, arguing that a new school board majority was needed to remove MBUSD Superintendent John Bowes, among other things.

A recent precedent does exist for post-election night comebacks. In 2020, council candidate Grettel Fournell held a 435-vote lead over Joe Franklin. That election, which was a high-turnout presidential election in the midst of the pandemic, and thus featured a high number of mail-in ballots, wasn’t determined for nearly a month. Franklin won by 88 votes.

The hope, Howorth said, is that Manhattan Beach can finally move past the bitter divisiveness that has marked local politics for the past few years. She said this has been less about partisanship than the vehemence of opposition that emerged for those who hold opposing views. The fact that Mayor Steve Napolitano and Councilperson Richard Montgomery supported Howorth and Lesser, despite being on the opposite side of political aisles, Howorth said, was indicative of how local politics can be more about serving the greater community good rather than fighting over ideologies.

“We don’t always agree, but we know where each other is coming from,” she said. “And we are going to try to make the best decisions possible for the most people for Manhattan Beach.”

“I think what is really good about this morning is I woke up and I said, ‘Yes, this is who we are. This is Manhattan Beach.’” ER