Mira Costa senior keeps her touch with the South Bay 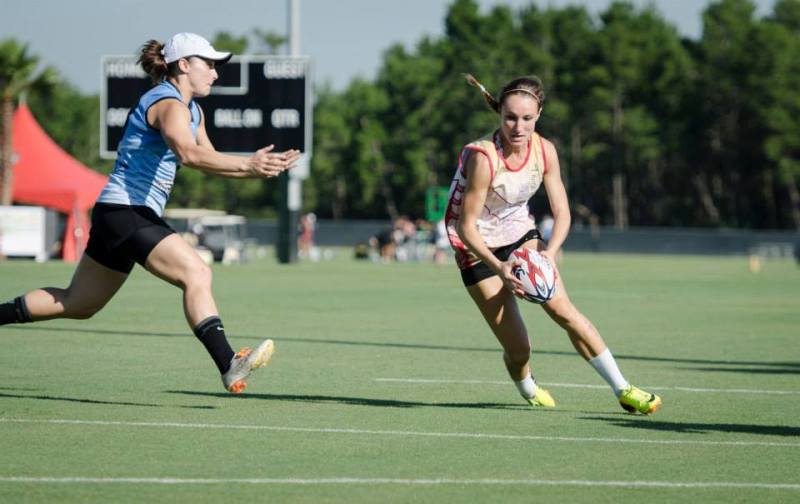 Although she has lived most of her life in other countries, Ellie Koncki considers the South Bay her home and the Mira Costa senior is making the most of her return to the Beach Cities.

Ellie was four years old when her father John, a school teacher in California’s Inland Empire, moved his family to La Paz, Bolivia to teach at an American school. After five years, the family moved to Singapore where he taught for the next eight years.

Growing up, Ellie loved to run and played every sport offered her but soccer was her passion. She was a standout athlete at Singapore American School where she also excelled at touch rugby, a less physical version of traditional rugby where players are downed by contact of any part of the body, clothing or ball. 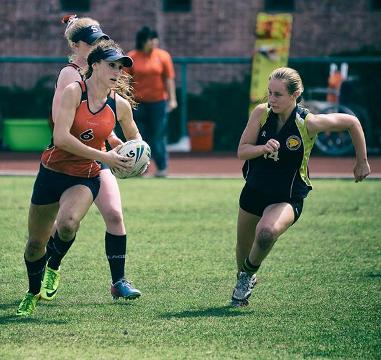 Ellie Koncki was a standout player for the Singapore American School. Photo by Raelly Alvarez

She played for Singapore American School’s Varsity Touch Rugby team, as well as for the Mixed and Women’s divisions of Centaurs A Grade Touch Rugby Club.

During summer vacations, the Koncki family would return to the United States, living at a family-owned house in Hermosa Beach. While in middle school, Ellie participated in the Junior Lifeguard program and attended soccer camps where she made many friends and felt comfortable living in the coastal community.

“Singapore doesn’t have its own culture,” Koncki said. “It’s a melting pot of surrounding countries and the people – even my own classmates in school – were not very friendly. The people in the South Bay are much nicer and I wanted to spend more time here.”

Prior to her sophomore year, Koncki convinced her parents to let her move to the South Bay where she lived with a host family and attend Mira Costa High School.

“There was one condition,” John Koncki said. “Ellie had to be on an athletic team. I did not want to leave a pretty, 15-year-old girl idle in the South Bay.” 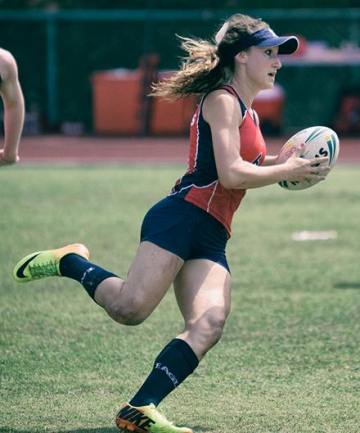 Mira Costa senior Ellie Koncki is the youngest member of the U.S. Women’s Touch Rugby team that will compete in the World Cup in May. Photo by Raelly Alvarez

Ellie tried out for the Mira Costa soccer team but was cut. Mustang head soccer coach Patty Perkinson had noticed that Koncki recorded impressive times during mile runs and introduced her to track coach Roberto Calderon who suggested Koncki run the 400 and 800 meter events.

However, when the holiday season arrived and Koncki returned to Singapore to spend Christmas with her family, she decided to stay.

After 13 years of teaching in other countries, John decided it was time to come home after the 2013-14 school year and is currently teaching Social Studies and English and serve as ASB Advisor at Adams Middle School in Redondo Beach. The decision is also allowing Ellie to spend her final year of high school at Mira Costa where she will run track this spring and is continuing her career in touch rugby.

Shortly after her return to the South Bay, Ellie began playing on the L.A. Touch Rugby team. She was noticed by members of San Francisco’s mixed team and was invited to play on its squad that competed in the U.S. Nationals in Orlando, FL. It was there that Koncki drew the attention of coaches from the Women’s Touch Rugby National Team and, at 17, became the youngest member of the team that will represent the United States in the 2015 Touch Rugby World Cup to be held in Coffs Harbour, Australia in May.

“I’m honored and excited to have been asked to help represent the United States,” Koncki said. “Like most World Cups, this one comes around every four years and it’s also the first time the United States is sending an all-women’s team to the tournament.

“With the players spread out throughout the country, our coach sends us specific workout drills while we play for local teams. The week before we leave for Australia, we will meet in Phoenix, Arizona to work out together and have our positions decided.”

Koncki works out with a co-ed team that practices at Hermosa Valley School and Begg Park in Manhattan Beach and is hoping that touch rugby, which is extremely popular in Australia and Asia, catches on in the United States.

“It is such a fast-paced game that requires more strategy that conventional rugby,” Koncki said. “Because there is no scrum or tackling, players must drop back to play defense in a hurry after a player is downed by a touch.”

Koncki said she enjoys writing and her favorite subject is English, but plans to study sports medicine while attending college in California.