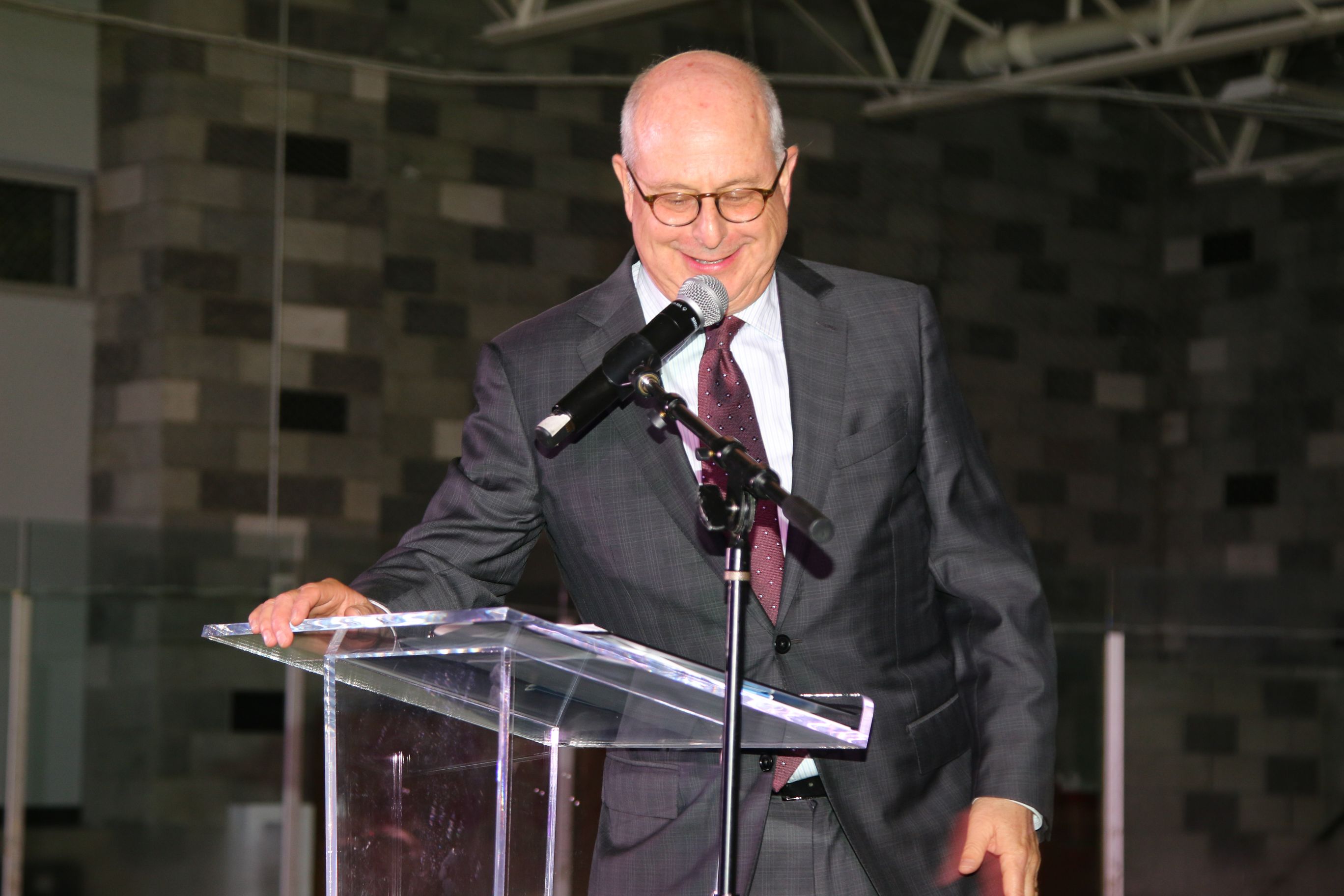 “Richard Lundquist of Continental Development, Allan Mackenzie of Mar Venture and I all wanted the property. After my company got it, Richard and Allan asked me to lunch. I thought, ‘Oh, oh, this can’t be good,’” Hackman recalled.

Though Hackman has completed over $3 billion in real estate transactions in 41states, 888 North Douglas was his first in El Segundo. Lundquist and Mackenzie have completed dozens of El Segundo developments.

“So we had lunch and what they told me was, ‘Whatever help you need, we’ll give it to you.’ That’s unusual in our business,” Hackman said.

Dr. Patrick Soon-Shiong, owner of NantWorks and the Los Angeles Times, and the 2017 recipient of the Champion of Business award, was similarly generous during his introduction of Chapman.

“Where he goes, I go,” Soon-Shiong said. “He bought Television City in Culver City and we moved to Culver City. He’s developing in El Segundo, so we moved the LA Times here. Now he’s bought MB Studios and I’m thinking we should move to Manhattan Beach, too.”

Though Soon-Shiong appeared to be joking about Manhattan, he has reportedly acquired a large property in North Redondo Beach, not far from MB Studios.

LA Kings president and Hockey Hall of Famer Luc Robitaille was the keynote speaker for the Champions of Business dinner, held Sept. 26, on the practice rink at the Kings’ El Segundo training center.

Though the ice was covered, guests were given hand warmers when they arrived. This prompted  Robitaille to further warm up the audience by saying, “I know I’m from Canada but I’ve lived in California for 30 years and I cannot believe you are wearing hand warmers. This is not cold.”

Robitaille then thanked the City of El Segundo for making it easy for him to recruit players, most of whom end up living in the beach cities.

He acknowledged that last year was “a tough year, not much fun,” but promised Mayor Drew Boyles, “When we win the Stanley Cup, we will bring it to City Hall.”

Robitaille said the team’s Stanley Cup Championships in 2012 and 2014 began with a strategy embarked on in 2007 to play a “heavy game.”

“But we won so easily, the league changed the rules to replace what we call a “heavy game” with  a faster game. So we’ve changed our strategy to emphasize faster, younger players.”

In keeping with the evening’s theme of kindness, Robitaille said the Kings recently formed a partnership with the Sandy Hill Promise Foundation to teach 75,000 school age kids, nationwide,  to be kind to their fellow students, especially less popular students.

The Kings have also donated trauma kits to every South Bay school.

“Two years ago, we lost one of our employees, Christiana Duarte, in the Route 91 Harvest Music Festival shootings in Las Vegas. After those tragedies, companies typically have a moment of silence, donate some money and move on. We decided to do more,” Robitalle said.

Espahbodi said when Stricklan approached him for funding he dismissed her. “I told her to come back when she had a better business plan. Tonight, I’m proud to say she proved me wrong.”

“I showed up in my full service, dress blues for that meeting,” Stricklan, a 21-year Air Force veteran, recalled.

In 2017, one year after its founding, Slingshot helped orchestrate disaster relief for Hurricane Harvey flood victims.

“We use orbiting satellites to make the world smaller by connecting us in ways we couldn’t do before,” Stricklan said. “We present complex data visually, so anyone can use it to make informed decisions.”

Following Stricklan’s remarks El Segundo Mayor Drew Boyles speculated that El Segundo has more PhDs per capita than any other city in the state.

“We are the most important five square miles in Southern California,”  he added. The mayor then presented the Big Idea Award to the founder of a legacy industry business, one that is disrupting its industry. Recipient Don Ressler is co-founder of online, subscription-model TechStyle Fashion. The one-stop fashion site designs many of the brands it sells

“We founded the company in my Manhattan Beach living room in 2010 and moved to El Segundo the next year,” Ressler said. His company now has 135,000 square feet and 600 employees in El Segundo and sells to five million subscribers in 12 countries.

In addition to the Hackman development, she mentioned:

The 7-acre Nash Street Exchange on El Segundo Boulevard, at a former Raytheon site. It will include 90,000 square feet of retail, restaurant and medical offices.

Voss also noted that the 120-acre Smoky Hollow district continues to transition from light manufacturing to R&D and creative offices.

Beyond Meat was founded in El Segundo in 2010. Today, it’s valued at $12 billion. After going public this past May, its shares soared 700 percent.

The Champions of Business evening ended with a presentation of a chartreuse-colored Tyler Surf long board to Al Keahi, chair of the  city’s Economic Development Advisory Council. The Hawaiian-born, former tourism executive is credited with resurrecting the moribound advisory council when he became its chair in 2014.

“We don’t want to be Silicon Beach. We want El Segundo to have its own identity,” Keahi said as he held up the built-in-El Segundo surfboard.