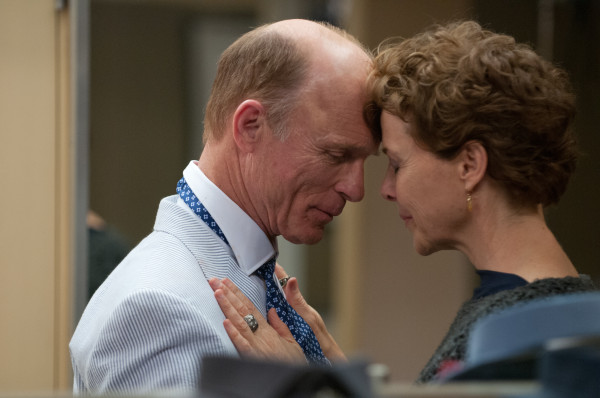 “The Face of Love” is a melancholy ode to loss and redemption written by Arie Posen and Matthew McDuffie and directed by Posen. This thoughtful, if slightly melodramatic, film is a throwback to the four hankie pictures of the 1940s when the stalwart heroine, and that was the time when the heroine was always stalwart, enduring trial after trial, finding love, losing love and still mustering the courage to go on. “The Face of Love” is in that tradition, substituting Annette Bening for Greer Garson and Ed Harris for Walter Pigeon or Ronald Coleman. The tear-jerker was a mainstay of American cinema for years and disappeared only when both costumes and Technicolor trumped the stories and the acting flattened “Magnificent Obsession” with Rock Hudson and Jane Wyman and the remake of “Imitation of Life” starring Lana Turner and John Gavin come to mind. They aren’t bad movies per se but rather florid. “Imitation of Life” benefits from the memorable performances of Juanita Moore and Susan Kohner, but it’s as much about Lana Turner’s wardrobe as it is anything else. “The Face of Love” returns emotional satisfaction to the weepie, but more importantly it celebrates development and the resultant character growth, giving the audience an adult film of substance and thought.

After thirty years of marriage, Nikki (Annette Bening) is as much in love with husband Garrett (Ed Harris) as she was at the beginning. Celebrating their anniversary at a Mexican beach resort, Garrett, ever the bad boy, ignores the warning of staff, and his wife, and takes a late night swim and drowns. His death devastates her and even five years later Nikki is still in the fog of mourning, resentment and disorientation. Trying hard to regain some footing, she begins to return to activities that once gave her pleasure. Visiting the art museum one afternoon she is startled to glimpse a man in the garden who is a dead ringer for her deceased husband.

Unable to shake the image of the mysterious man, Nikki haunts the museum in hopes of seeing him again, and when she does, she meticulously tracks him to his work. The man, Tom (also Ed Harris), is an artist who teaches art at Occidental College and she devises numerous ways to insinuate herself into his life. Tom, who never recovered from the rupture of his marriage to the love of his life, is suddenly energized and inspired to begin painting again. In Nikki, he has found his muse and the new love of his life, a deeper, purer love, or so he thinks.

The closer they become the harder it is for Nikki to deal with her duplicity as she is enmeshed in confusion over which feelings are for Garrett and which for Tom. And the longer the affair plays out, the harder it becomes to tell him the truth that she has been hiding from him. No one will escape unscathed.

Robin Williams, playing the next door neighbor who longs for Nikki, is rather superfluous although he is mercifully able to understate his performance. Jess Weixler as Nikki’s daughter helps propel the action forward. And a beautiful Amy Brenneman as Tom’s ex-wife serves only to fill in background. They are all fine in roles that add little dimension to the main drama. This may be because the writers, Arie Posen and Matthew McDuffie, did little to develop those characters, making them little more than expository elements used to explain background and set up the story for its devastating reveal.

More successfully, Posin has made the environs of Los Angeles a character in the film. One can feel the weather, make note of the architectural variation, whether for good or ill, and enjoy the effect that the tranquility of the gardens of the Los Angeles County Museum of Art has on the protagonists.

Ed Harris, beautifully cragged and aging gracefully, is wonderful as both men, able to convey their differences soulfully for Garrett is playful, sexy and narcissistic, while Tom is deep, sincere and fragile. Bening, however, is the true star and shows enormous subtly inhabiting a woman whose love has both buoyed and destroyed her. She convincingly conveys the heartbreak of every stage of mourning and the consequences of involving an innocent in this process.

See it On Demand