“Farewell My Queen” bids adieu to a kingdom [MOVIE REVIEW] 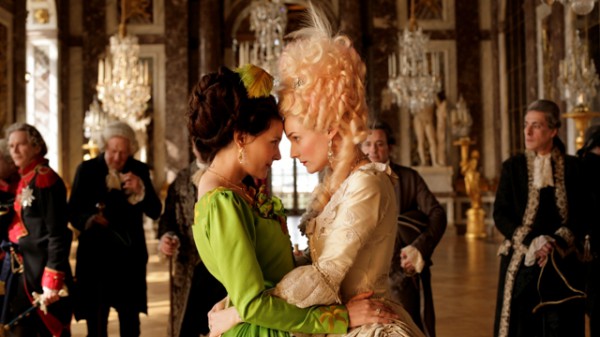 Virginie Ledoyen stars as Gabrielle de Polignac and Diane Kruger stars as Marie Antoinette in in Farewell My Queen. Photo courtesy of the Cohen Media Group

“Farewell My Queen” takes place literally on the morning the French Revolution begins, July 14, 1789. Life is bustling at the court of Versailles where royalty lives in both splendor and squalor on the grounds of the palace in order to be as close to Louis XVI as possible. Chambermaids, valets, ladies-in-waiting, gondoliers, gardeners, seamstresses and cooks all vie for position on the lower rungs of the below-stairs society. Intrigue reigns in bedrooms both above and below as servants try to negotiate their futures, conducting affairs of the heart that may release them from their present circumstances. On an upper rung of the servant ladder, Sidonie, the Queen’s reader, is often called to entertain the Queen in her bedchamber with tales of history, sadness or frivolity depending on her whim. Sidonie, uninterested in affairs of the heart, is rabidly devoted to Marie Antoinette and would do anything to remain in her favor, despite the political dangers of such a stance. The queen’s occasional confidences have convinced Sidonie that her beloved queen will protect her.

When, on July 15, word has filter to the court that the “rabble” appears to have gained control of Paris, a shiver is sent down the collective spines of the royal inhabitants, especially when a pamphlet is circulated listing the heads that must roll first. Number one on the list is the publicly despised and ruthlessly frivolous Marie Antoinette; number two, her reputed paramour Countess Gabrielle de Polignac, a high-born member of a bankrupt family whose beauty, demeanor and insouciance had attracted the lonely and needy queen.

Royal hangers-on began to flee, especially when it became apparent that Louis would acquiesce to many of the peoples’ demands. The queen, however, unmoved by any enmity toward her, as this has been a theme of life since arriving in France, is most concerned for her “friend” Gabrielle. She asks her adorable little Sidonie for the ultimate sacrifice in the name of her queen, a favor rife with all the frivolity, narcissism, betrayal and personal disregard for others that characterized her reign.

The trio of actresses driving this film are beyond superb. First among equals is Léa Seydoux, whose 2011 filmography includes roles in “Midnight in Paris” and “Mission Impossible – Ghost Protocol.” As Sidonie, she infuses her character with both an iron will and a naivete that form the inner conflict that may (or may not) be her undoing. With alabaster skin, off kilter smile, and eyes searching for the promise in her circumstances, Seydoux pulls us into her journey. Virginie Ledoyen, as Gabrielle, is self absorbed perfection caring only for herself, a perfect illustration of what the citizens of France were fighting to unravel. Her strut, alone, illustrates her disinterest in all around her. And finally, Diane Kruger, the gorgeous German actress from “Inglorious Basterds,” among other international films, finds all the right notes in conveying the narcissism of the Austrian-born queen, dropping enough insignificant small, caring moments to seduce Sidonie into believing that a better life would follow. Clueless and calculating at the same time, Kruger’s Marie Antoinette plays with your emotions, veering wildly from sympathetic to heartless to dismissive and back to warmth.

Production values, including the sumptuous costuming, are spectacular as Versailles is shown both as the crown jewel we know today and the instrument of ruin set up by Louis XIV to ensure the indentured servitude of the aristocratic class in need of political favors while simultaneously bleeding them dry financially in dank, marginal, rat-infested apartments on the grounds of the palace.

Director Benoît Jacquot, writing with Gilles Taurand, successfully mixes the queen’s leisurely lack of concern with the urgency of the below-stairs staff subject to the capricious wills of their masters and worried about the political events unrolling in Paris, events that will either propel them forward or cut them dead. Jacquot visually tells a story both routine and extraordinary and he does so at a pace, that while often leisurely never lags.

Go see period historical drama at its best and live within the walls of a time of extraordinary luxury and danger.

Opening on July 13, just in time for Bastille Day, at the Laemmle Royal Theatre in West L.A.