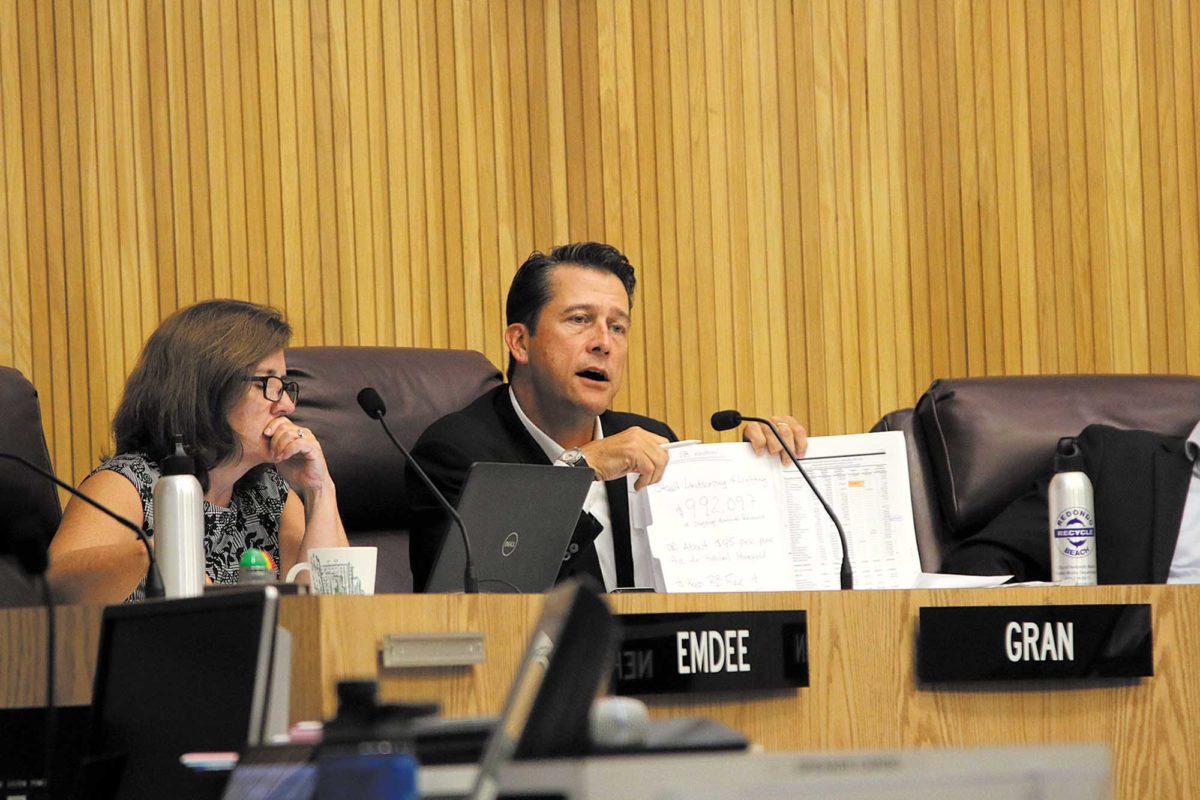 The proposed recall of Redondo Beach Councilman John Gran is heating up after an incendiary poster-sized mailer, sponsored by the Redondo Beach Firefighters Association, was sent to residents across Gran’s North Redondo district.

Last week, residents of Gran’s District 4 received a sizable piece of campaign literature, which repeatedly slaps Gran with the Trumpian moniker “Dishonest John.” It goes on to strike his elected colleagues Laura Emdee and Christian Horvath (misnamed as “John Horvath”) and a number of City Hall staffers with similar monikers, before casting them all as part of a “political machine” with an “elite, pro-developer donor base.”

“It’s pretty disgusting, and I’m sorry that they have to try to disparage me…this is getting a groundswell of people who are saying that it’s outrageous,” Gran said.

The firefighters, slighted by Gran’s refusal to back their bid pursuing a fire services merger with LA County, have come out as a driving force behind the effort.

In August, Gran was the swing vote that killed the City’s bid to move forward with “Phase 2” of a feasibility study examining the costs of hiring the County to take over Redondo’s fire services.  Phase 1 of the initial study, examining costs for Fiscal Year 2018-’19, indicated that County could offer services for between $15 and $20 million per year, not including cost escalators, for initial savings up between $4 to 7 million.

“I believe what they’re afraid of doing, is they’ve drawn a line in the sand. If they get to Phase 2 of the study, they’re going to realize the savings were there all along. What does that do to them? It makes them look terrible,” Allen said.

Gran disagreed with the premise, standing by an assessment made by City staff that find any savings made by going County would be minimal, due to costs that would remain with the City, when compared to projected increases in Redondo Beach Fire Department’s budget. He went on to argue against repeated implications that he is attempting to protect Fire Chief Robert Metzger, whose job would not carry over to the County should a switch occur.

“The Fire union is very hurt because they wanted the study; they said they’d abide by the numbers. We don’t agree on our internal numbers,” Gran said, pointing to the disparate projections made by City staff and RBFA members.

The reason for not continuing with Phase 2 of the study, Gran said, is that the study won’t show a significant difference in ongoing savings between RBFD and County. The City will only learn the costs of conversion, and any potential one-time credit the City may earn for its existing equipment.

Redondo Beach began studying a potential switch in response to concerns of an ongoing structural budget deficit: the city’s annual revenues are flattening, while expenses increase by millions of dollars each year, largely due to increases in pension liabilities.

Redondo’s budget problems have had a chilling effect on the city’s ability to negotiate with its employee bargaining units, coming to a stalemate with both RBFA and the Redondo Beach Police Officers Association. Earlier this month, the City Council briefly discussed imposing a contract on the firefighters, before backing down. The motion would have included a 2 percent base salary increase while also restructuring the language currently in place for holiday time and overtime.

That restructuring, however, would result in an overall pay decrease for the firefighters, who — as a unit — are the greatest recipients of overtime pay of any city employee. In 2018, RBFD’s $3.36 million total overtime pay approximates 55.9 percent of the total $6.01 million accrued by city employees.

Within weeks of deciding against imposition of a contract, the Council instead found common ground with RBPOA, giving the police a 2 percent pay increase.

RBPOA President Robert Carlborg credits Gran’s “willingness to find compromise” as a reason his members will support Gran against this recall effort.

Gran has also listed his Council colleagues Horvath and Emdee as supporters against the recall, as well as Mayor Bill Brand.

Brand firmly believes that Gran’s vote against the study was a mistake, and that a further rejection of RBFA’s offer to pay for the study “smacked of inside politicking.” Brand said, “I don’t believe stopping the County quote in midstream was in the best interest of the residents, especially after Firefighters offered to pay for it. Relying solely on staff data and recommendations is rarely a good idea.”

“Nevertheless,” Brand said, “it didn’t strike me as worthy of a recall.”