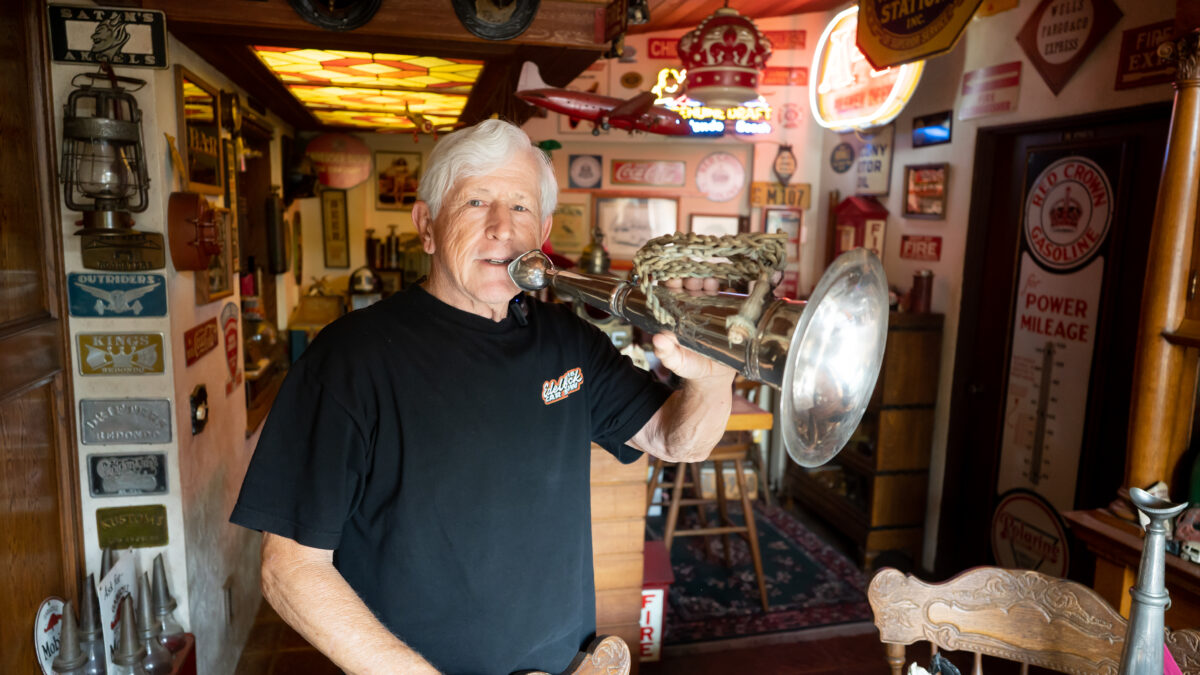 Pay Aust, the retired Redondo Beach fire chief, with one of his "speaking horns" used to direct staff. By Jefferson Graham

People have called Pat Aust crazy, and he’s fine with that.

The retired Redondo Beach Fire Chief’s passion for collecting has him living atop a custom built 2,400 square foot garage in his Redondo Beach home. It’s crammed with 13 vehicles from mostly another place and era, like a vintage Fire Chief’s 1938 red Ford from Pomona.

His 4,000 square foot home has over 35,000 collectibles, mostly related to fire fighting, classic cars, gas stations, soda pop signs and other relics of another era.

Aust also has a separate facility in Gardena for the rest of his vehicle collection, including a 1921 American LaFrance fire truck and 17 vintage cars.

“Yeah, people call me crazy,” says the 72-year-old former fire chief. “It’s insanity to a degree, but my children and grandchildren will be happy that I’m crazy.” The collection “is worth a lot of money,” and it will all go to them one day.

However, he’s not crazy enough to reveal the worth of the collection.

But he’s not selling. Aust has never hocked any of his collectibles, nor does he want to. 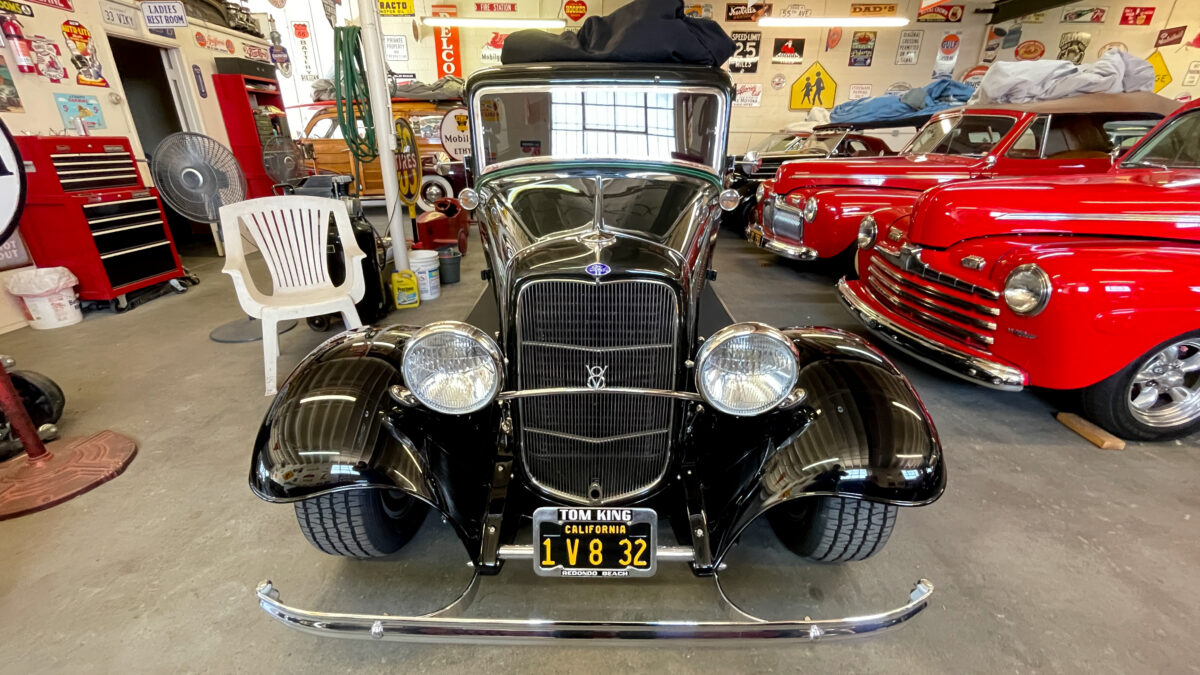 In jest, the Easy Reader asked Aust what it would cost to rent one of his classic vehicles for the weekend. He’s not crazy enough to accept the offer, at any price.

“There’s not enough money in the world to have me let you take these out,” he says. Only his son gets to take them for a drive.

“Even if we were to marry into the family?” 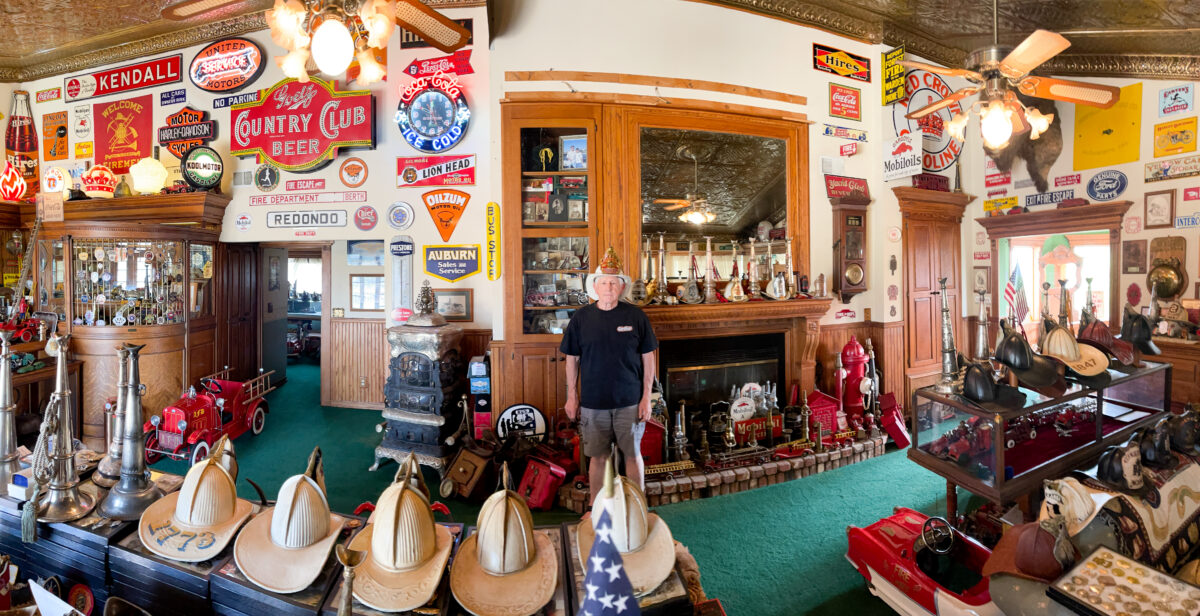 And he’s not crazy enough to drive one of his classic cars in public for normal street driving. For that he toils around in a 21st century era Ford pickup truck with RBFD license plate.

Why not have fun and take out that `67 Stingray Corvette or 1946 Ford Coupe?

“Because I’d get killed,” he says.

People would gawk as the vehicle is going down the street, and stop paying attention to the road. “They’d crash right into me,” he says. 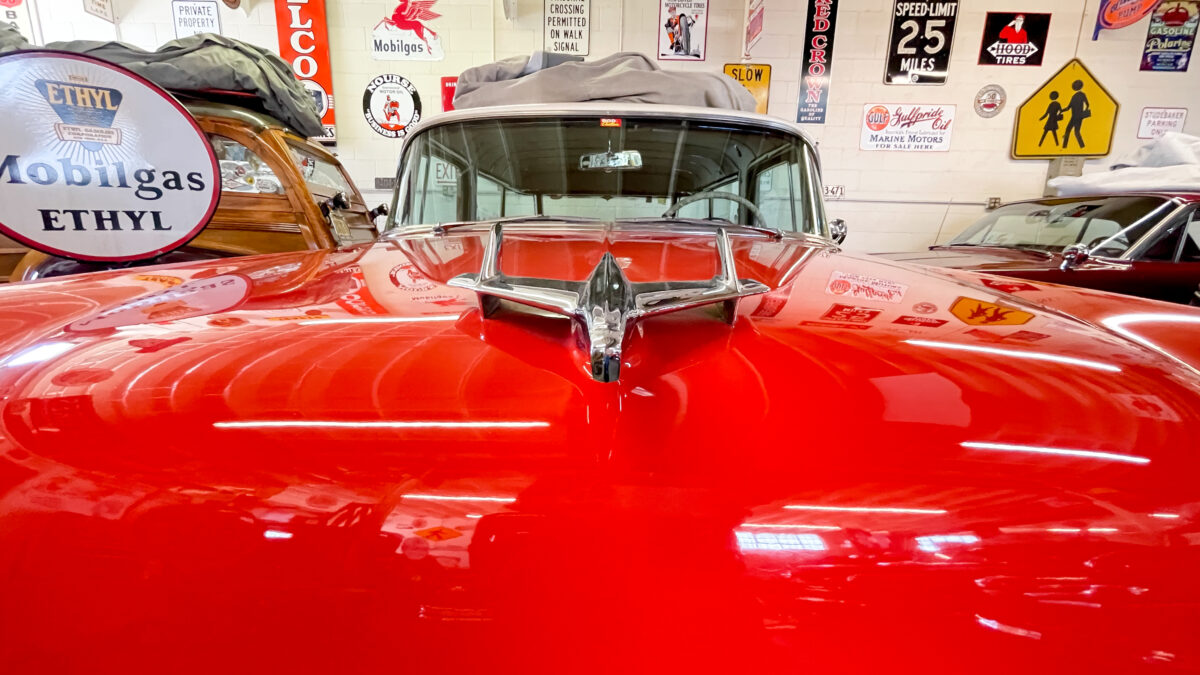 Aust grew up in Hermosa Beach, and moved to Redondo in 1966. He and his wife of 55 years Linda are still in the family home they bought for $21,500 back in 1970. The nostalgic sensory overload begins the minute you enter the front door, with fire memorabilia in the living room, followed by a kitchen ripe with even more fire hats, Coca-Cola and old gas signs in a museum like presentation, all leading up to his masterpiece — the second story.

Up there there are dozens of fire chief “speaking trumpets,” which officials used back in the day to bark out orders before the advent of battery-powered megaphones, badges, firefighter helmets, toy fire trucks, bells, old Coca-Cola clocks, signs for Hires Root Beer, motor oil and gasoline, a stuffed steer and two classics from the 1800s era: a barber chair and a complete 1800s era bank teller cage that connects to a bar. 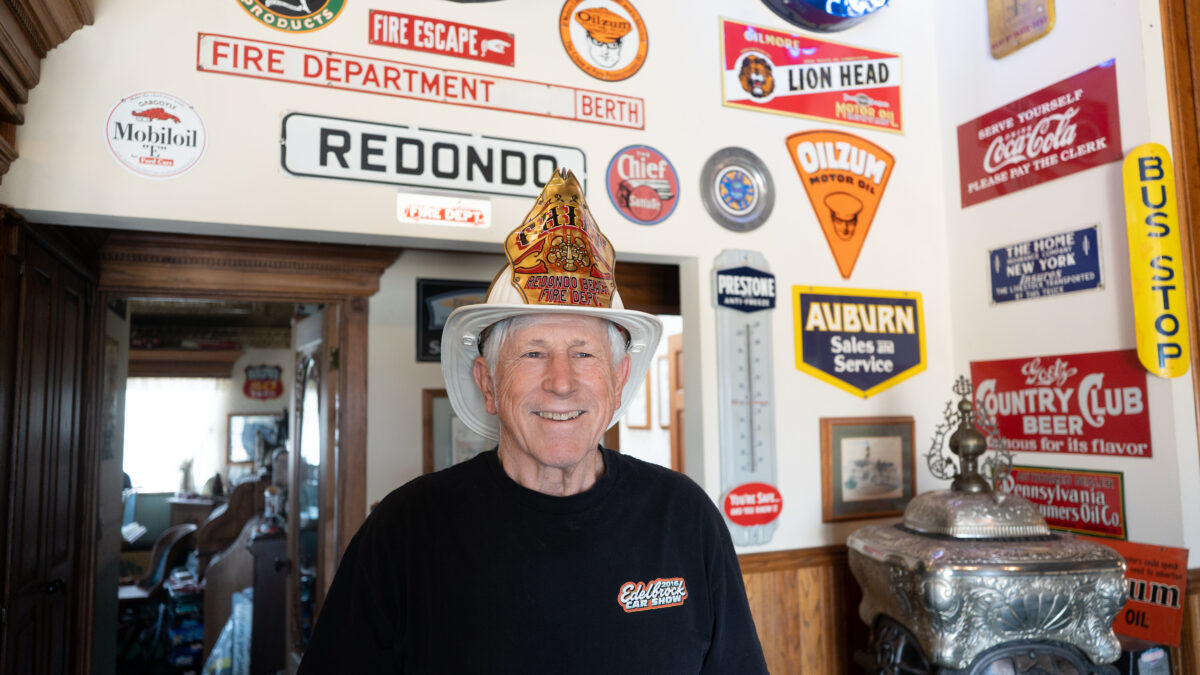 Aust told the Easy Reader in 2013 that his collection topped 35,000 pieces and that it was one of the largest on the west coast. He declines to update the exact numbers, only to say “it’s much bigger.”

Aust began his career working for the city of Redondo as an electrician before moving onto the fire department and rising to chief. He retired in 2003 and went on to get elected to the city council, where he served two terms and later was on the board of directors for the Beach Cities Health District. 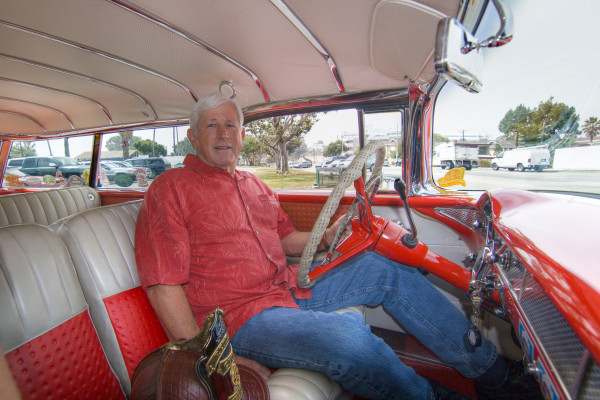 Pat Aust in the driver’s seat of his Chevy Nomad. Photo /Civic Couch

His passion for collecting began as a teen, with cars, a love he attributes to his grandmother.

“She said you collect things you want for your life, that make your life better. You live with the things you enjoy.” And he has tried to live on that motto.

Aust began adding fire memorabilia to his collection when he began working at the fire department. 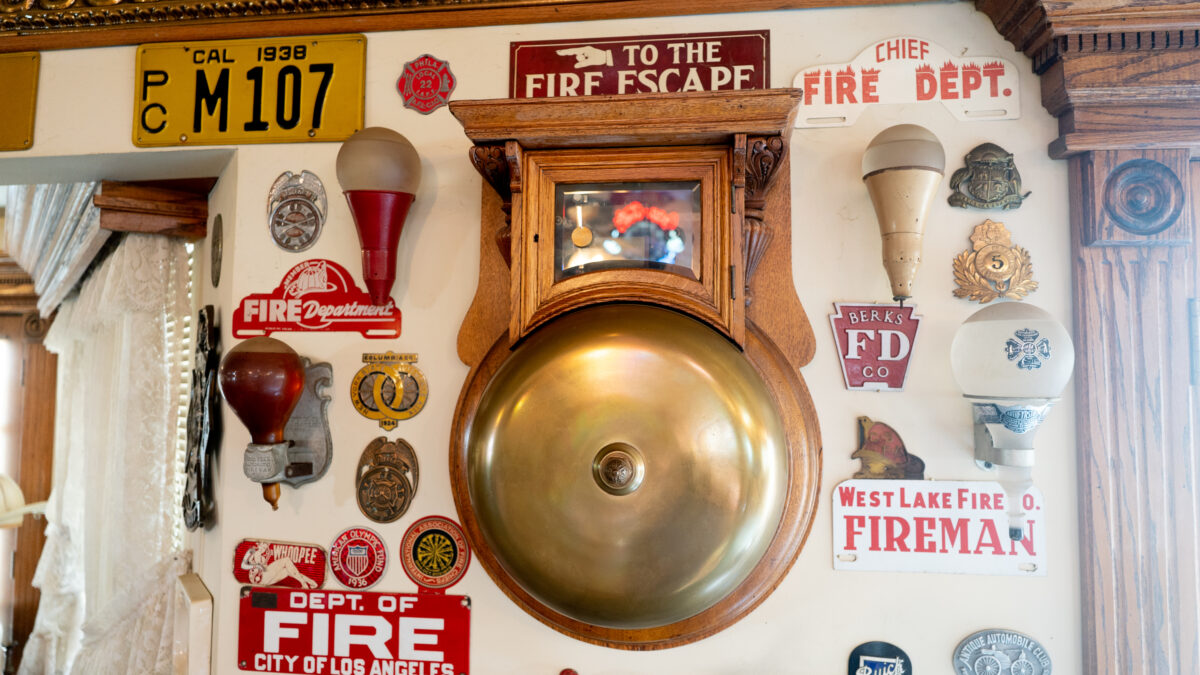 The reason: he didn’t think firefighters got the respect they deserved, especially considering how much people loved them.

“Police do a tremendous job, but when they come to your door, it’s usually to arrest you,” he says. “I’m never coming to someone’s house to arrest them. We make their day better, by saving their lives and putting out the fire.” 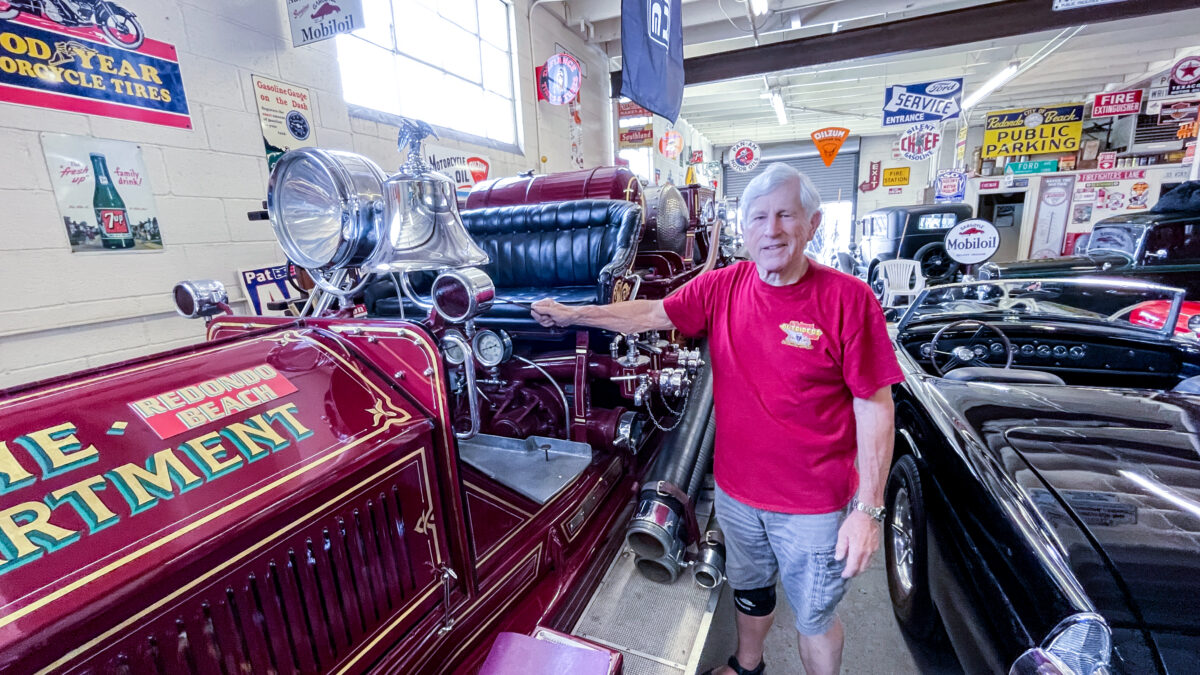 His fire truck collection includes antique models that once belonged to the cities of Redondo, Avalon on Catalina Island and Inglewood.

Many seniors at a certain point realize they’ve spent enough on stuff over the years and start shedding their possessions.

So for Aust, who says he buys new stuff every day, ever think of quitting the collecting?

When does it end? “Somebody else will make that decision, because I’ll be dead,” he says. “ I’ll never stop collecting.” ER 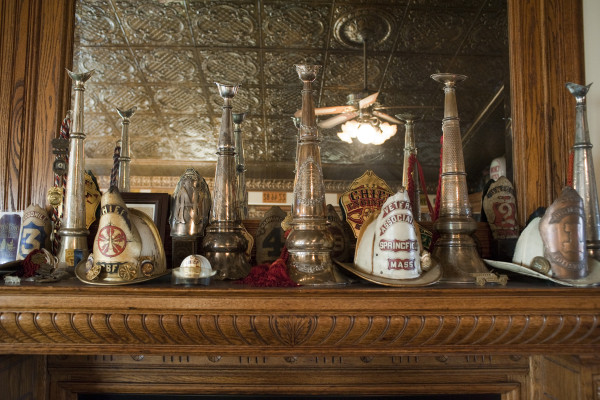 READERS: DO YOU HAVE A PASSION FOR COLLECTING? Jefferson Graham wants to hear all about it. Write him: jeffersongraham@gmail.com