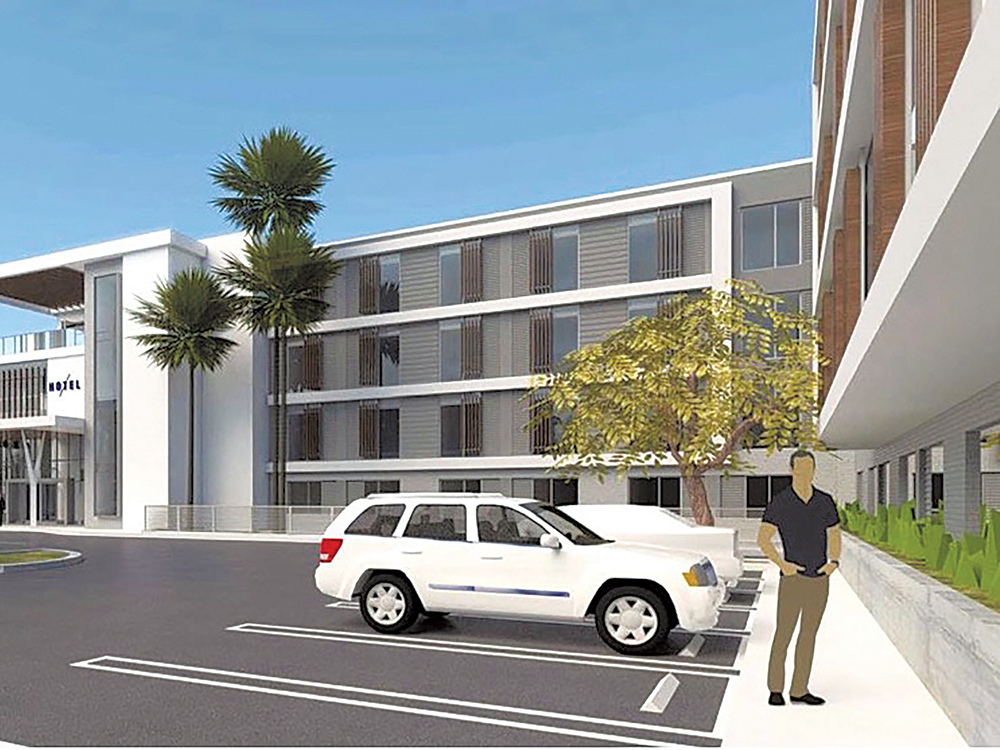 The hotel takes advantage of “Sepulveda overlay”  zoning, enacted in 2019, that allows a height of 40 feet and will thus become the tallest building in the city’s Sepulveda corridor. The size and height of the project attracted overwhelming neighborhood opposition from a group calling itself “MB Poets,” named for the section of town just east of the project site which has poet street names, such as Tennyson and Keats. Both MB Poets and the employee union representing another hotel in town, Westdrift, appealed the Planning Commission’s previous approval of the hotel, and filed lawsuits accusing the developer of defying California environmental law.

The Council made a few minor concessions, such as reducing the hours of the hotel bar, disallowing valet parking, and requiring a regular review of the hotel’s neighborhood impacts every six months. But the council otherwise approved the project as proposed, largely because it both conformed to zoning and offered a positive change from the series of failed restaurants at the site.

The man behind the project, Jan Holtze, a Manhattan Beach resident, engineer, developer, and founder of Live Oak Properties, said the hotel would serve business visitors and fit perfectly with the rest of the city’s Sepulveda corridor.

“This project clearly will be a very positive and necessary addition for our community, one [in which] our city can take great pride,” Holtze said. “The new Skechers headquarters coming online will bring in over 700 new employees and visitors daily. The hotel will be a perfect complement, creating a unique energy and keeping those visitors local, supporting both our restaurants and our retail establishments. The synergies between Skechers and the hotel will create significantly more pedestrian activity, further adding to the energy of this part of Sepulveda, not to mention these synergies, reduced traffic otherwise generated by people leaving to go elsewhere.”

Councilperson Steve Napolitano said he both liked and didn’t like the project, which he said exemplified why he’d voted against the 40 ft. height allowance two years ago. Echoing residents longing for the restaurants that had come before the hotel project, Napolitano said that while he sympathized with neighborhood concerns, the council had to abide by the rules it had established.

“It’s a shock of the new, that you have this great big thing going in where there wasn’t something there before, or it was very low key restaurants, pushed a lot closer to the street side,” Napolitano said. “I  go back to the Lococo’s [restaurant] days.  Would I love to have it there? Sure. But that’s not what’s before us now. We can’t pick the project before us, so we’ve got this one.”

“I think this is probably the best possible use for this parcel,” Mayor Suzanne Hadley said. And as Steve said, we are not in the business of picking projects. We don’t go out and look for projects and say that’s a good fit with our neighborhood, I really do think the market bubbles these up. Some things are worth it financially, some things aren’t.”

Councilperson Joe Franklin said the hotel is likely to have a better financial future than what has preceded it.

“Look at the failed enterprises that have been at that lot,” Franklin. “ And I know it’s quiet, and I know there have been restaurants and bars…But the property owner and developer get to decide, to some degree, what is the best use of that land. Because they’re working within the parameters of the code.”

Nearly two dozen residents spoke against the project, nearly all from the MB Poets neighborhood. Their concerns were the traffic and safety impacts of the development, the erosion of privacy for the homes nearest the hotel, noise, and the overall change a 40 ft. building will have on the neighborhood.

Resident Steve Petrotti said his family has been in Manhattan Beach 90 years and that projects like the hotel threaten to take away what is special about the town.

“It is hurting our small town feel, and small is better,” Petrotti said. “Less is more for Manhattan Beach. And now you take this new project, and I remember when it was like Lococo’s and my sister had her wedding reception there. And I remember when it was a Magic Pizza, and it used to be a nightclub briefly, and then it was Chevy’s and then it was El Torito, and I love that tableside guacamole by Jose every day there. It was wonderful to walk up to; now that’s going to be gone. So slowly, systematically, our city is becoming a big city like Santa Monica. And I’m sorry, I like Manhattan Beach. I send people routinely to both cities, because I’m in the hospitality industry. They always say they love Manhattan Beach more. Why? Our small town feel. It’s not full of traffic and congestion.”

One mother, Kathy Clarke, said her two sons had both been hit by cars playing in the neighborhood.

“I’ve personally dealt with traffic issues, and that was long before a hotel this size came into the picture,” she said.

Darryl Franklin, the leader of the MB Poets opposition group, argued that the project should be subject to a full Environmental Impact Report Report under the California Environmental Quality Act. He noted that the senior housing project at nearby Goat Hill and the Skechers project only a block away both completed EIRs.

“Why is the city trying so hard to avoid an EIR? Because an EIR takes time and costs the developer money and is likely to result in changes to what is proposed,” Franklin said. “The city wants this development and the tax revenue it will bring and I suspect the developer has spelled out to the city his criteria for minimum viability for the project. As developments go,  hotels have huge impacts. Lots of people, lots of cars, lots of noise, lots of alcohol and lots of sewage, all hours of day and night.”

The MB Poets hired an acoustic consultant who argued that noise from a rooftop deck would exceed allowed decibel limits; a traffic analyst who said the developers traffic projects were vastly understated; and a former California Department of Alcoholic Beverage Control investigator who said that the type of license the hotel bar seeks indicates it will be open to the public, contrary to the proposal’s claim that both food and beverages will be for guests only.

“Today may be May the 4th but this planning process equivalent of trying to pull the Jedi mind trick will not work,” MB Poet leader Franklin said. “We can see the droids. The facts are the facts, the law is the law, and if it is ruled today as exempt from an EIR, a judge is going to do a full review of this entire saga. MB Poets urges the council to do the right thing and order a proper EIR.”

But both an attorney representing the project and city staff testified that the proposed development fits the “Class 32” EIR exemption under CEQA, which is intended to streamline  “shovel-ready” urban infill development projects. This specific exemption requires projects to be consistent with general plan and zoning designations, located on a site five acres or less, bordered by urban uses, and without significant impacts to traffic, noise, air quality, or water quality. Community Development director Carrie Tai, answering specific questions from Napolitano, said that the developer completed studies on all these specific impacts that would essentially be the same as an EIR analysis.

Napolitano pushed back on the notion that the city’s driving factor was revenue. The hotel is projected to produce $1.3 million in transient occupancy tax annually.

“Money is not the deciding factor here. Hotels are great for cities but that’s not the reason to approve this,” Napolitano said.

Instead, Napolitano said it was about what was right for the city overall, and whether or not its impacts could be mitigated. Napolitano’s subsequent motion included amendments to the proposal that were intended to mitigate impact, limiting bar service to 11 p.m. Sunday through Thursday and 1 a.m. Friday and Saturday, not allowing rental car storage or any paid parking, and subjecting the hotel’s permit to frequent review.

Though his motion passed unanimously, Napolitano was less than pleased with the project. He said that the fact that the project site included a retail and office building showed that the fourth story height increase was never needed to attract a hotel, contrary to what a hotel consultant told them in February 2019. In fact, that consultant, Bruce Baltin, told council 45 ft. would be needed.

“You get a roughly four-story building,” Baltin said at the time. “You need that as minimum to justify the cost of land, destruction and the cost of operation. These hotels generally would like to have a minimum of 100 rooms…So you need enough height to get enough rooms onto a site.”

At that same 2019 meeting, not a single resident spoke against the height increase. The council ordered another round of public notices, trying to attract more resident input before a second reading of the ordinances a month later when the height increase was finalized.

“It does concern me that we don’t have a single person here who’s adjacent to Sepulveda to speak for or against these changes,” Napolitano said at the time. “And they are going to be the ones who are going to be impacted the most.”

At Tuesday’s meeting, Councilperson Franklin said he understood residents’ concerns over the change to their neighborhood.  He said he’d received a pamphlet attached to his front door handle saying, “The Poets Section doesn’t want to live in a fishbowl.”

“And I wish the person who attached it stayed around because I want to show them something and that is that I live in a fishbowl,” Franklin said.

He said that when his family moved into their home 30 years ago, they were surrounded by single story homes built in the 1940s. Soon one two story home went up, then another. Then a family across the street on a double lot passed away, and two very large homes went up. At some point, the Franklins lost two hours of evening light to the shadows of their new neighbors’ homes.

“We weren’t exactly thrilled with it,” Franklin said, noting that the positive that came of it was his family changing to hardier, drought tolerant landscaping. “Neighborhoods change.” ER