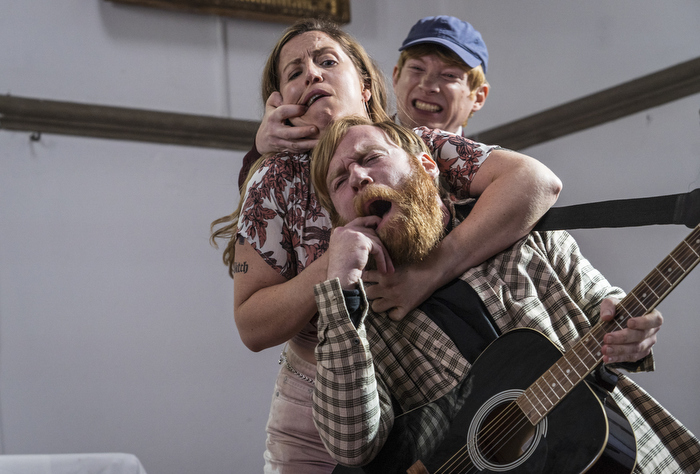 Rarely has more talent misfired on a project than the six episode series entitled “Frank of Ireland.” This screams vanity project. Written and created by Brian Gleeson, Domhnall Gleeson, and Michael Moloney, starring the Gleeson brothers, this Irish series, which makes a point to be pointless, is also not very funny. Directing credit, such as it is, goes to MJ Delaney.

Hopes were high on my part based on recent exposure to Irish comedies now streaming on various platforms. “Derry Girls” is a truly funny, chaotic, sly yet unsubtle Irish comedy following a group of underachieving Catholic school girls in Northern Ireland who just want to have fun in a totally misdirected way. “Bridget and Eamon,” plays on the comedy personae of the lead actors/writers satirizing life in Ireland in the 80s. It’s very hit or miss but when it hits it’s a bull’s eye. And then there’s the 90’s classic, “Father Ted,” a  comedy about priests exiled to a barren island somewhere in Ireland for grievous, unspoken misdeeds. It is truly one of the most politically incorrect hilarious half hours that is jaw-dropping in its skewering of religion and their fellow Irishmen.

So what about “Frank of Ireland”? Brian Gleeson and his brother Domhnall are the sons of iconic actor Brenden Gleeson (“The Guard” and “In Bruges”). Domhnall is a current “It” actor having starred in “Star Wars,” ‘Brooklyn,” and the “Harry Potter” franchise. Brian, not as well known or established as his brother, has had supporting roles in “Hellboy,” “Death of a Ladies Man,” and “Logan Lucky.” This was their baby and they gave themselves the starring roles. 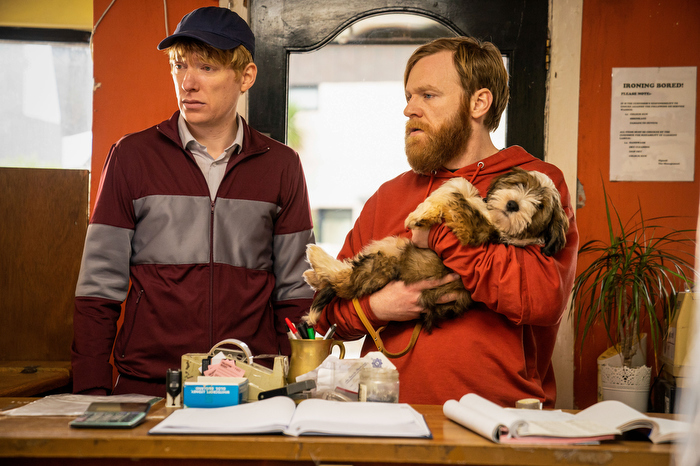 Frank (Brian Gleeson) is a 32 year old unemployed loser still living at home in Dublin with his mother Mary. But Frank has delusions of grandeur and a best pal even thicker than he is, Doofus (Domhnall Gleeson). His name is as on the nose at it sounds but at least he has the wherewithal to be semi-employed. Their big dream is to make it as musicians and their music is as lame as they are. Frank has an on again off again relationship with his girlfriend Aine, having broken up because she won’t indulge him in a particularly graphic sex act, one that he repeatedly mentions.

Frank’s mother Mary is no nonsense and her tolerance of her worthless son is minimal, at best. Besides a crimp on her pocketbook, he’s an impediment to her very active sex life.

There are other characters that recur, but they are as superficial as the humor in the scripts.

To say that this is self-indulgent twaddle is, for the most part, generous. That is not to say that there aren’t isolated moments of humor, but most of those are hammered so hard that they are as flat as the proverbial pancake.

Character development is in short supply. Domhnall has given Doofus a glimmer of substance. Doofus, as limited as his name implies, worships at the altar of Frank but occasionally shows backbone and humanity. Brian as Frank, on the other hand, does not. They wrote it and if they can’t find dimension, there is no one else to blame.

Mercifully, each episode weighs in under 30 minutes so there’s not much risk.

As to the other actors, none of whom have been given much to work with, Pam Boyd as Mary Marron, Frank’s mother, is engaging and occasionally funny in a terrific hard-edged way. Sarah Greene as Aine is quite good and makes you believe that she is truly confused and insecure about her place in the world.

The moral of the story? Bad writing, poor character development, chaotic storytelling do not a series make – Irish or not.