“Generation War” – Lost in so many ways [MOVIE REVIEW] 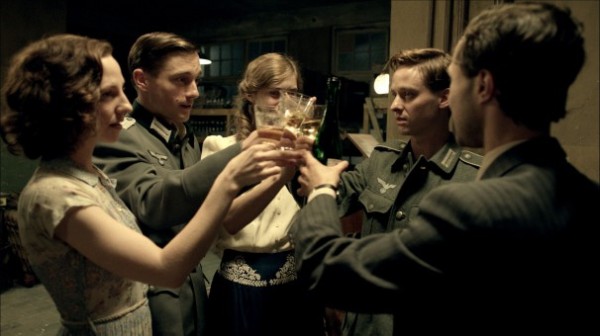 “Generation War,” originally made as a mini-series for German television, has been reformatted into two parts for theatrical release. Grand in scope, beautifully filmed and acted, “Generation War” frames its narrative around five friends in Berlin 1941. Wilhelm, Aryan-handsome and an unspoken leader of the group, is a lieutenant about to depart for the Russian front with his brooding, philosophical and unenthusiastic younger brother Friedhelm. Charlotte, hopelessly and silently in love with Wilhelm, has just earned her cap in nursing school and she too will be departing for the front to serve the wounded. Victor, their Jewish friend, is well aware of what the future may hold for him even as his friends seem oblivious to the dangers. An assimilated Jew whose father cannot fathom that his country would see him as anything but the World War I hero that he was, he recognizes that he must escape Germany just as American visas dry up and leaving the country is now against the law for Jews. His girlfriend Greta, flouting the German law that condemns and imprisons those accused of Rassenschande (race shame), wants Victor almost as much as she wants to be the next Marlene Dietrich, ironic in that Dietrich was deemed an enemy of the people for speaking out against the atrocities being committed by the Nazis.

Believing the war on the Russian front will be over almost before it begins, the friends bid adieu and follow disparate paths. Friedhelm is a burden that Wilhelm will gracefully carry for some time. He has promised their mother that he will take care that no harm comes to him; their father, seeing Friedhelm as a weakling and intellectual misfit wants nothing more than for the war to make him a man. In no time the reality of fighting a war on unfamiliar turf takes hold and Wilhelm’s platoon, victorious countless times remains within reach but unable to attain Moscow, now a Sisyphean task. And then the winter sets in.

Charlotte, the wide-eyed innocent sent to bring order to the chaos of injury, believes in the Fuhrer’s propaganda more than the others, buying into the myth of Jewish evil despite her friendship with Victor. Struggling to deal with the horrific psychological and physical injuries she sees on a daily basis, she forms a bond with a local Russian, Lilija, who has been recruited to help her on the ward. Lilija, who patiently teaches her and covers her many mistakes, has a hidden past for she is all things Charlotte has been told to hate. Discovering that Lilija is a Jew, Charlotte betrays her to her superiors and Lilija is arrested, leaving Charlotte with a stain on her heart she will never be able to erase.

Greta, arrested for playing swing music, deemed decadent and illegal, comes to the attention of a high ranking SS officer, Dorn, and begins an affair with him in order to further her singing career. As personally opportunistic as she is, she also uses the affair to try to shield Victor, obtaining from Dorn a visa for Victor to leave the country. Dorn, providing the paperwork, subverts the plan by having Victor arrested as he leaves for the train station. Victor gets a train ride but it’s not to Paris.

Victor’s fate takes an even more dire turn when he is crowded into a box car bound for Auschwitz. Another detainee on the train, Alina, a Polish insurgent, has carved an escape hatch in the bottom of the car and with Victor’s help they are able to flee the moving train. She leads him to a gang of Polish partisans where he helps them carry out guerilla attacks against the Germans.

As each story arc is followed, there are fleeting moments where the stories and friends intersect. Under most circumstances such coincidences would be deemed unrealistic, but like running into a friend half way around the globe, these instances only serve to deepen the conflict and the characters, drawing the viewer further into this world.

Suffice it to say that this is an extraordinarily moving story told from the universal perspective of “war is hell” even when it is the enemy telling the story. Much like “Das Boot” from many years passed, it is the inherent humanity and personal conflict that brings about growth that is on view. There has been much controversy about how little of the Holocaust is discussed or even mentioned within the framework of the story. Interestingly, many have complained that the Poles were portrayed as more anti-Semitic than the Germans. Each is entitled to his own interpretation. As for me, I was prepared to hate this film. My grandfather was put in a concentration camp during World War II and I have no love for Germany. But this is not what the film is about. It portrays, at least in my interpretation, the hell of war, no matter the perpetrator, and the evil of the framers. That there is virulent anti-Semitism in Poland should not even be a question; that it existed in World War II among partisans fighting to free Poland seems entirely realistic. Debating who was more anti-Semitic seems to be akin to discussing how many angels fit on the head of a pin. No one is a hero in this film. All the protagonists are flawed and all undergo enormous growth by the end and this is something to celebrate – a film with a universal story and great characters.

Directed unsentimentally, despite the melodrama of the personal situations, by Philipp Kandelbach and written insightfully by Stefan Kolditz, this is a film that is all the more extraordinary because it is German. Still trying to understand and expiate the guilt thrust upon a generation that is more than 80 years away from the rise of Hitler, Kandelbach and Kolditz have produced a film that doesn’t shy away from the products of that war. They are not casting blame elsewhere because this is not a film about blame. That people have been upset about what they view as omissions is only an indication that they weren’t paying attention for the anti-Semitism, be it German, Polish or American (remember, by 1941, no more visas were available to Jews), is on full view and one doesn’t need to shout that Jews were being gassed when train loads of Jews in striped pajamas were seen rolling down the tracks. If you write it and play it well, a glance or a line of dialogue is enough to convey an encyclopedia-full of knowledge such as the appearance of an American officer turning a blind eye to the hiring of Dorn, the former SS officer, for his “administrative” experience.

Charlotte (Miriam Stein), Katherina Schuttler as Greta and Ludwig Trepte as Viktor are all quite fine but Volker Bruch, the handsome Wilhelm and Tom Schilling as his brother Friedhelm are superb and should be international stars. Mark Waschke as Dorn is also of particular note as he is the personification of what Hannah Arendt dubbed “the banality of evil,” if there ever could be such a thing.

“Generation War” which had a short run at the Landmark Nuart Theatre will be released May 6 on DVD, Blu-Ray and VOD.