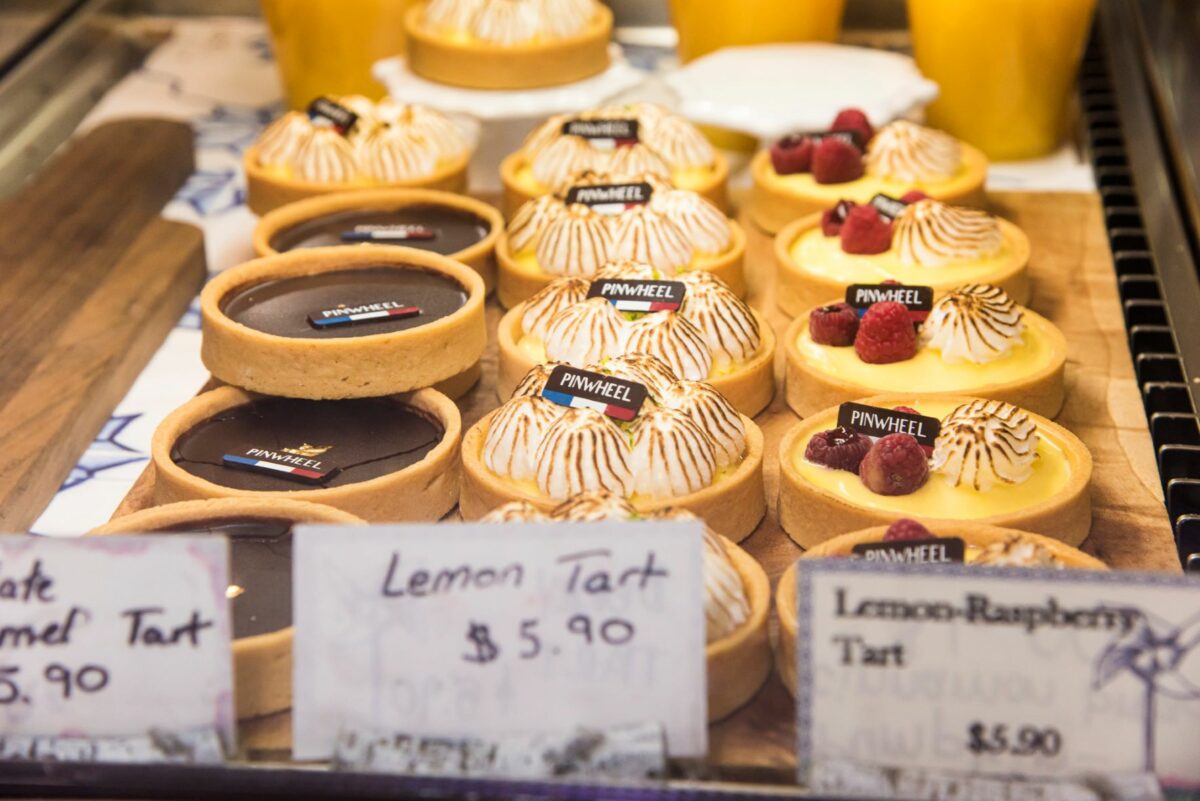 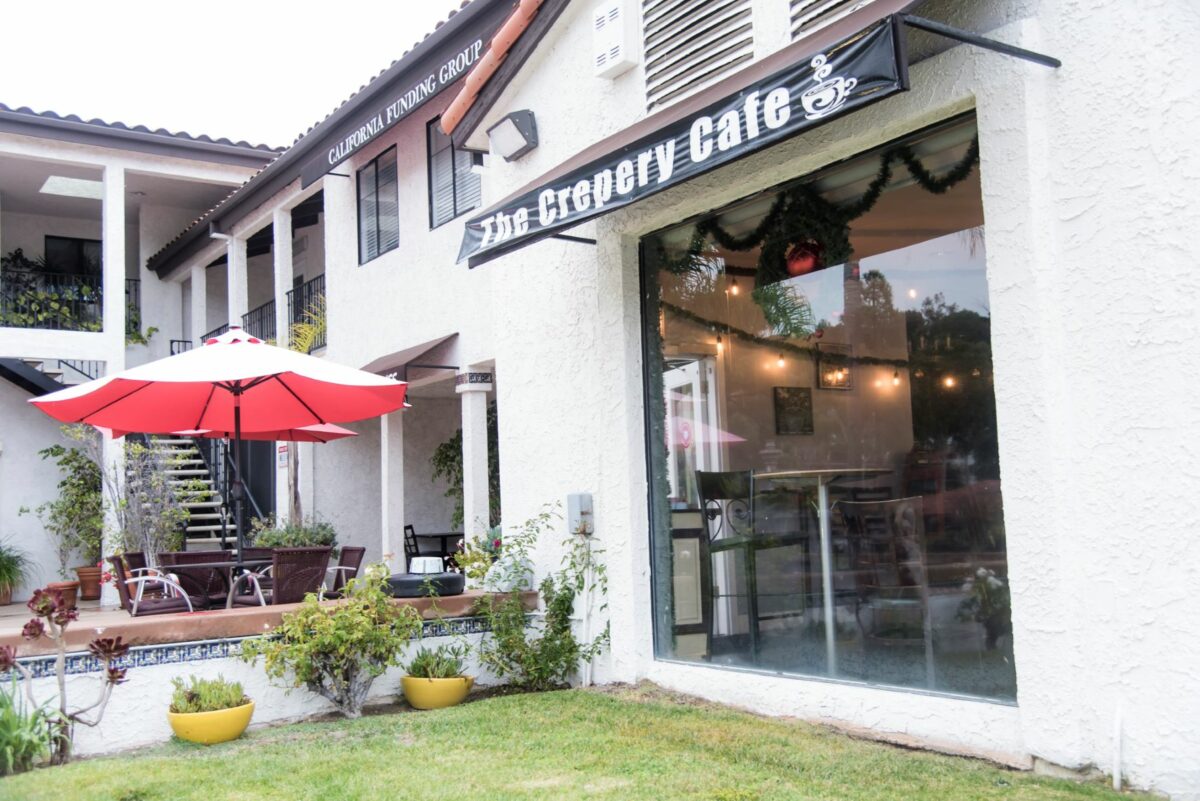 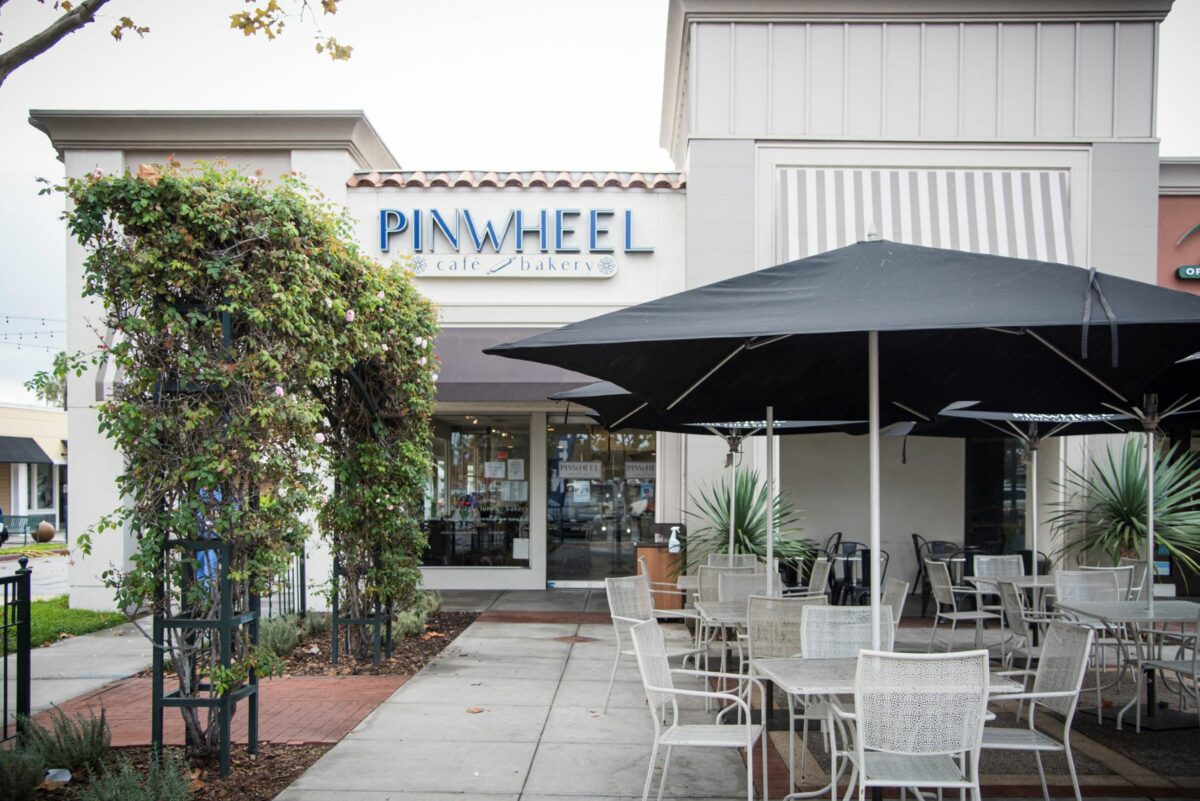 Pinwheel Cafe and Bakery is next to Trader Joe’s, in Rolling Hills Plaza.

The phrases we borrow from French say a lot about our opinion of their way of life. People who couldn’t understand street directions in Paris routinely wish us bon appétit, call someone a bon vivant, or speak of joie de vivre. We know what they mean. It’s the language of sophistication, of life lived well and experiences savored, and has been regarded as such around the world for centuries. That is most apparent in the language of food, where words like sauté and charcuterie, flambé and terrine, are everyday terms in kitchens great, and humble. 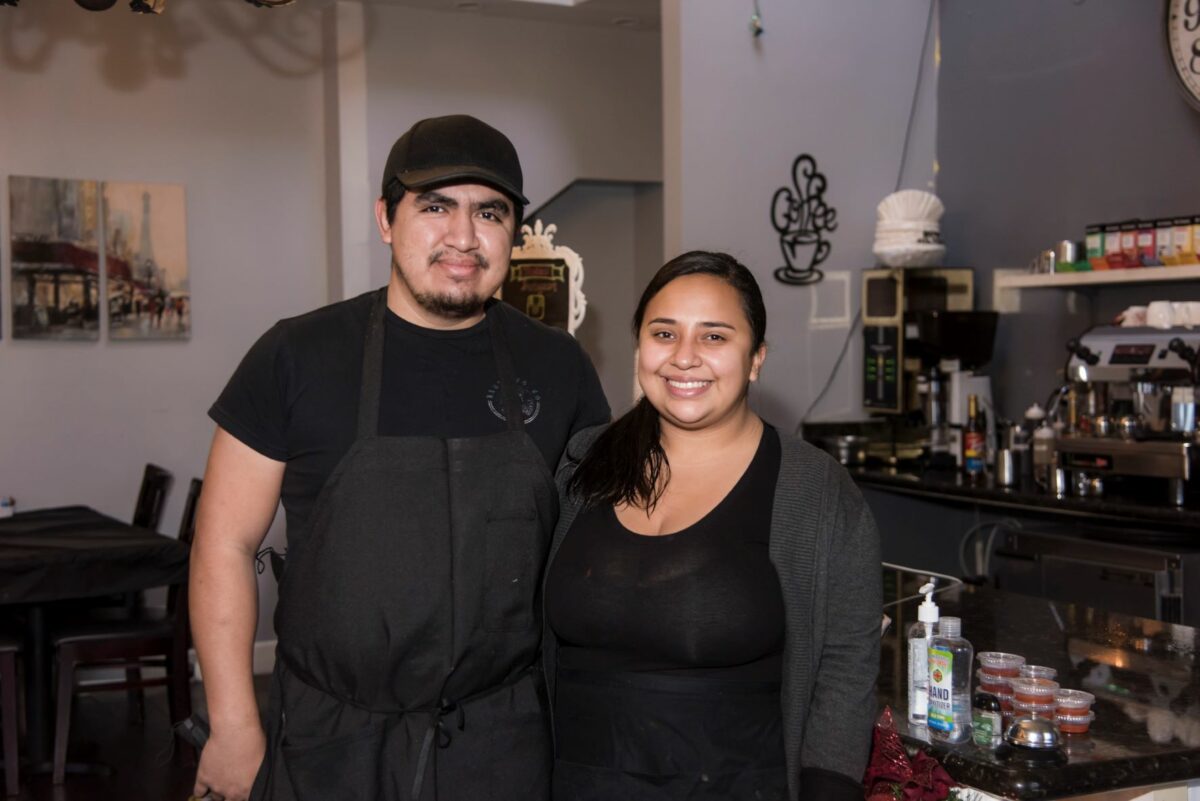 To that list I might add crêpe, omelette, and croissant, which are the subject of today’s article. To be more specific, it’s about places to get these items for breakfast or brunch, whether midweek or weekend. The Peninsula actually has multiple choices in this regard, but there are two I haven’t written about, the Crepery Café and Pinwheel Cafe and Bakery. 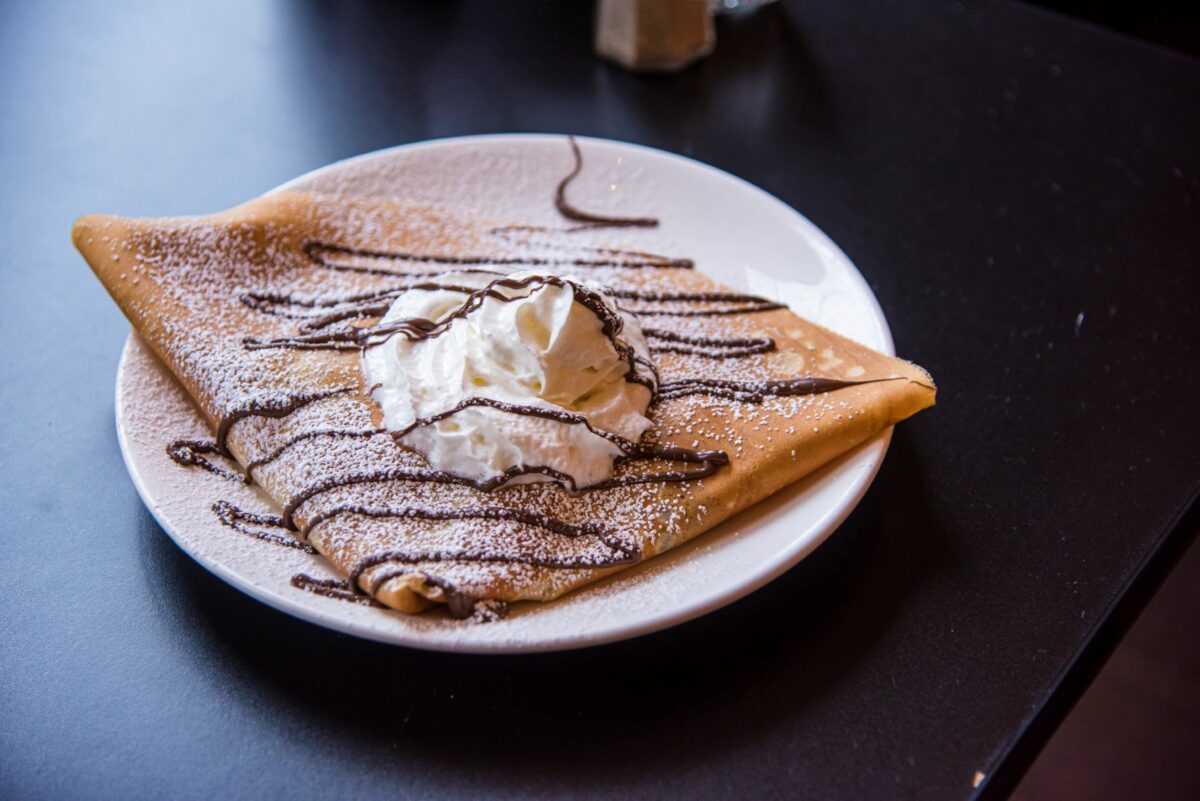 As plenty of people will undoubtedly point out, the Crepery Café’s name is a misspelling, albeit a common one in non-Francophone countries. Creperie is more proper, but as Shakespeare observed about roses, by any other spelling a crêpe tastes the same. If you drive down Silver Spur regularly you’ve probably seen the red umbrellas outside but might not know the business behind them, since the sign for the adjacent Medawar Jewelry store is much more prominent. The Crepery Café is located well back from the street and behind a median, so despite the address on Silver Spur, the only vehicle access is from Bart Earle Way.

Once you find the place, you have the option of dining on the patio or the pretty interior space with a French Provincial interior. We chose the outside tables, which are quiet thanks to the street offset and offer a view of the green hills behind the Town & Country center.

It was natural to order a crêpe there, because that is, after all, what the place is named for. We chose a vegetarian omelet with a potato gratin on the side for our second item. There was a wait because a party of 10 had just ordered and the kitchen was slammed, but our server warned us about it and we elected to stay and enjoy the sun and our coffees. I had asked for a ratatouille crêpe, but had been warned that the last portion of that vegetable mix had probably been ordered, and I chose a chicken chevre filling as a backup. I ended up with the latter, chicken breast chunks with goat cheese and roasted tomatoes, and a breath of herbs and, like all mains here, it arrived with a side of salad. The crêpe itself was made with white flour rather than buckwheat, which is unusual – the French usually use crisper, nuttier-tasting buckwheat for savory crêpes, white flour for dessert crêpes. Our server mentioned that they used to use buckwheat, but supply problems have made the variety the chef prefers unavailable. I prefer buckwheat, but this was well-made and well-proportioned – it was a light but filling meal.

The vegetarian omelet was also a model of simplicity, spinach, mushrooms, tomato, and onion with jack cheese. (Jack is an American variety, but somewhere in France, with its 400 varieties of cheese, there must be something similar.) As with the crêpes offered here, this isn’t stunt cooking with novel combinations, but faithful renditions of classics. They hit the mark with the omelet and salad, but we were less pleased with the rather odd potato gratin that was on the side. A gratin is generally potatoes, or other vegetables, layered with cheese and topped with cheese, and baked so the top gets a crust. Here, egg was mixed with the cheese, and the top was heavily crusted with cheese, so it was more of a baked potato omelet with a crunchy top. That’s not a bad idea, but it’s not a gratin, and it was curiously bland. It improved with a shake of salt and pepper, but didn’t have the richness and full flavor of a gratin made with French cheese and no eggs.

We had intended to follow our breakfasts with a dessert crêpe, but we were comfortably full, so we sat on the patio and enjoyed our coffees while watching birds flutter around the trees on the hill. Breakfast ran about fifteen bucks per person, quite modest for a pleasant experience. The Crepery Café doesn’t have a huge menu or offer arcane items, but what they do, they do well. 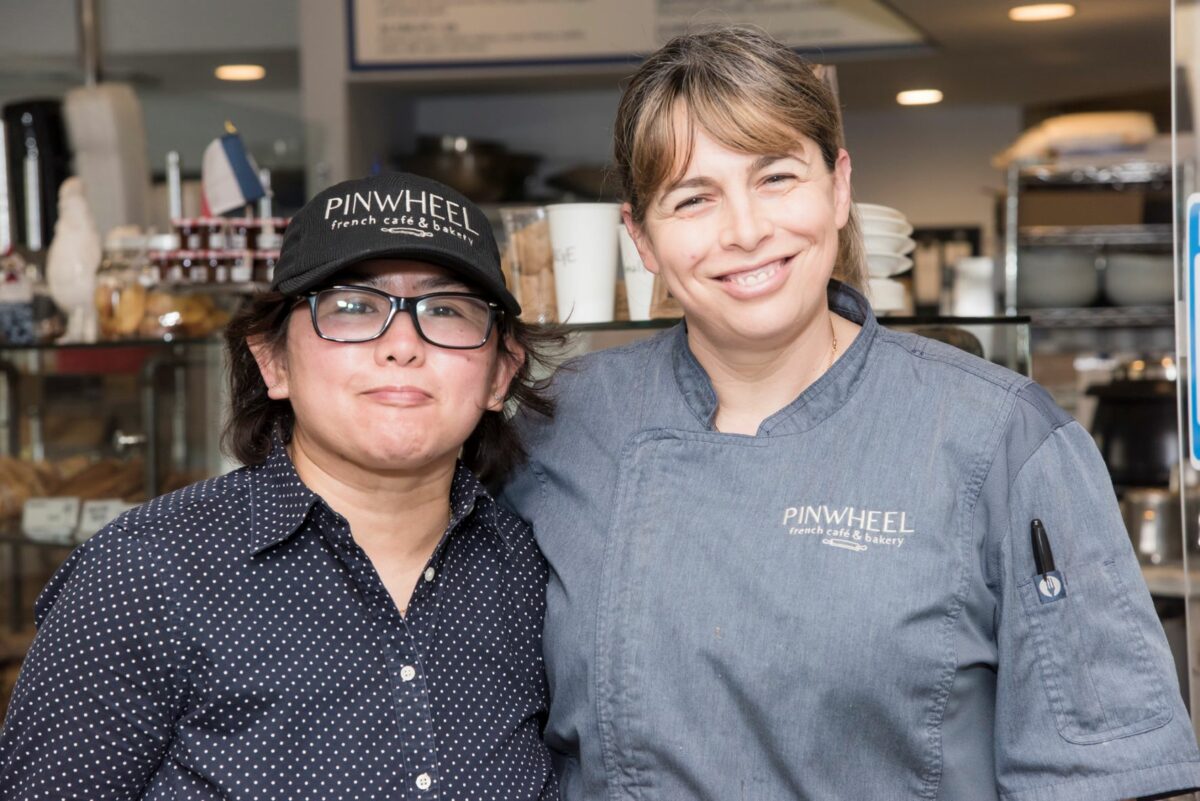 Plus a pastry case

The Pinwheel French Cafe & Bakery offers a very different experience. They serve just about every French breakfast, and brunch specialty except crêpes. They opened in 2017 in a corner of the Rolling Hills Plaza by Trader Joe’s with the intention of making cheese and pastries, and quickly found a following for their baked goods. (That’s the reason for the name – the pin is for rolling pins, the wheel for wheels of cheese. So said the owner, who was clearing a table next to us)

They never actually made cheese and expanded their food menu instead, becoming a weekend brunch destination (and midweek brunch too, for those whose schedule permits a leisurely morning meal any day.) You can make a meal of their pastries and coffee, and I have done that more than once, but much more is on offer. You may need to learn a new French culinary word, though – a tartine is an open-faced sandwich, not a small tart, and some people have been surprised by what they got when they ordered one.

On our most recent visit we decided on a Nordique omelette (salmon, cream cheese, capers, onion, lemon, and dill) and a “royal croque with salad.” The royal croque is a variation on the classic sandwich called a croque monsieur, a grilled ham and swiss or gruyere cheese sandwich. The name means “bite, sir,” and when topped with a fried egg it’s a croque madame. The royal croque is a croque madame with ham, bacon, cheese, an egg, and bechamel sauce on a croissant. It’s a tasty mess if you try to pick it up. They give you a knife and fork with this, and unless you’re very dexterous you should use them. It’s served with your choice of side dishes, and I picked French onion soup. They serve it in the traditional style, with cheese melted over it so it forms a crust on the outside of the crock. I spared a moment of pity for the dishwasher who has to scrub each one. Not so much pity that I wouldn’t order it again, because I would certainly do that. 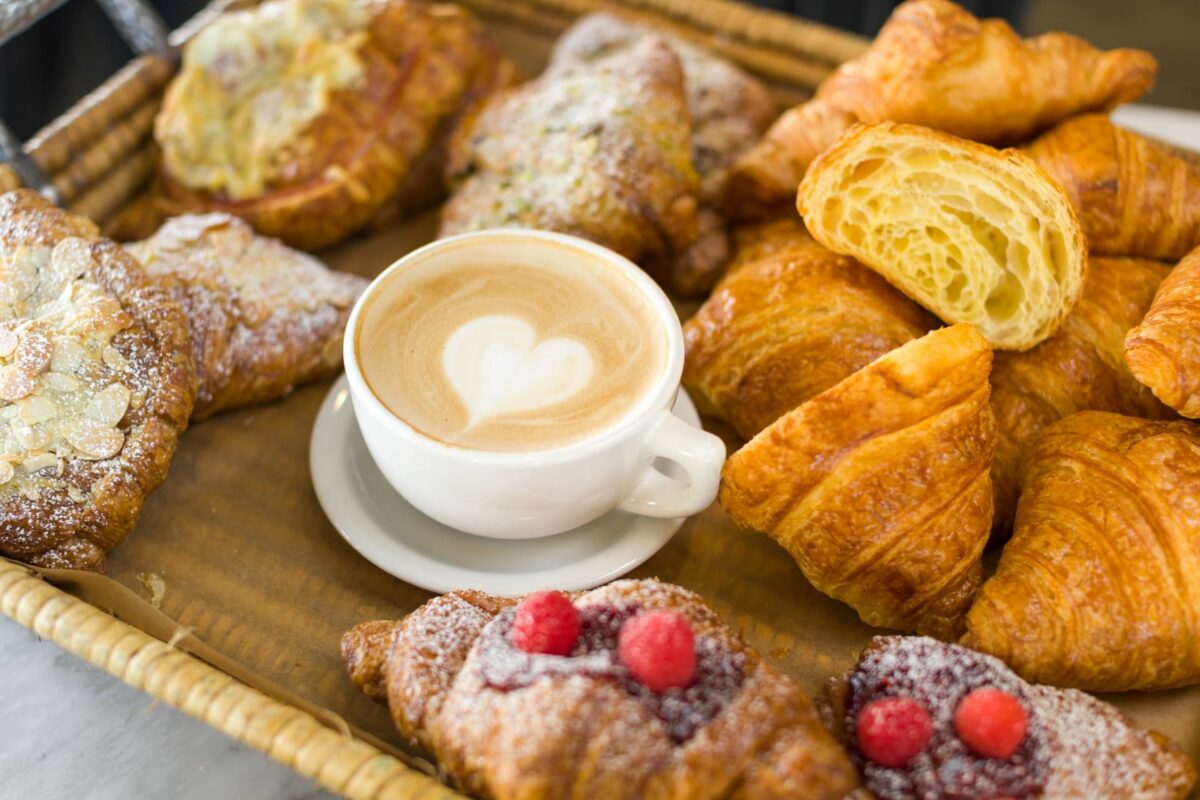 The Nordique omelet was everything you like with smoked salmon on a bagel, but inside a buttery egg casing instead, and that about says it all. The red onion and cream cheese are separate so you can add them to the omelette to taste, or just eat them with slices of the baguette that comes on the side. We chose a potato gratin again and this one was more traditional, thin slices of potato with cheese sauce beneath a browned crust. Like the rest of the meal, it was a solidly executed classic.

We finished with a peach tart and a kouign amann, the Breton pastry of flaky dough with caramel, and with regret left our table because there was a line out the door to dine in. Of course, we picked up pastries and bread for the next morning’s breakfast as long as we were there. Our entrees were both under $15, but our inability to pass the pastry case made it a somewhat more expensive stop than the Crepery Café.

Both the Crepery Café and Pinwheel Bakery offer flavors of France, one in serene surroundings, the other lively, and on any given day you might prefer one or the other. I tend toward the Pinwheel because…have I mentioned that pastry case? Yes, I think I did, but writing about it has made me want to go back again. Back to France sometime, but to one of these restaurants the next time a lazy morning comes around.