Going all out at the Torrance Art Museum 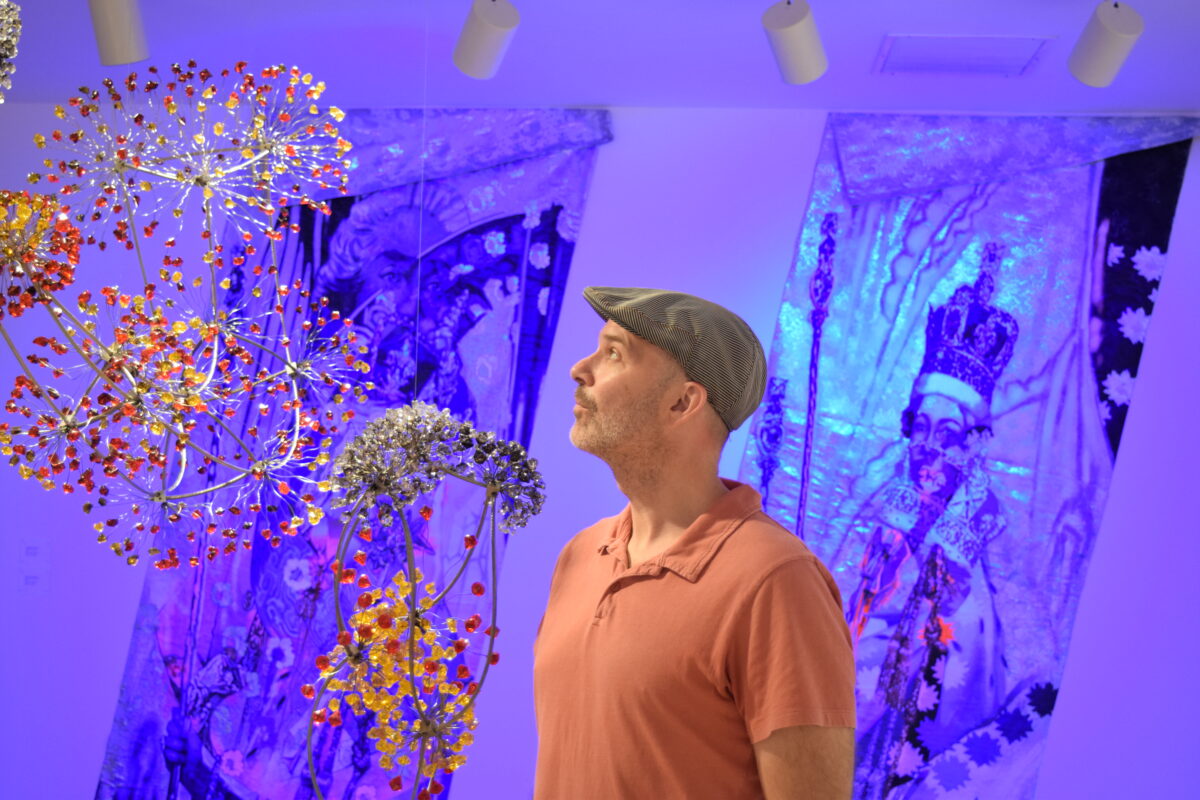 Jason Jenn, curator of “Even Sparkles Have Shadows.” Photo by Bondo Wyszpolski

Tears of joy, tears of sorrow, and what’s that about social media?

“Ultra!” was conceived last summer when the Torrance Art Museum staff realized that having a mostly outdoor public art tour would be beneficial for everyone. It has since become that and a little more in the months since. The show is impressive and ambitious, and it opens on Saturday at noon. Even without water it’s going to make a big splash because the exhibition not only takes place within and around the building but in several locations throughout the city.

This wide-ranging project, helmed by director and curator Max Presneill, was aided by assistant curator Sue-Na Gay, museum registrar Hope Ezcurra, and outreach specialist Jason Jenn. The museum has three distinct exhibition spaces—a main gallery, which is able to house large artworks, a more intimate Gallery Two, and an even tinier Dark Room that has often been used to screen videos or to feature singular installations. This time, in an effort to make us aware of the dangerously endangered Northern White Rhinoceros, Cynthia Minet has created an illuminated inflatable sculpture using recycled camping tents.

“Ultra!” does not lack for compelling and provocative artists (and are you really an artist if you don’t meet one of these criteria?), but I’d like to bring attention to “Even Sparkles Have Shadows” in Gallery Two. Presneill had solicited proposals from his staff and it was Jason Jenn’s concept that prevailed. With the work installed and ready for its DeMille closeup, Jenn discussed and revealed how it all came together. The eight artists include Michael Craig Carrier, Zära Monet Feeney, Chuck Hohng, David Hollen, Stevie Love, Haleh Mashian, Ken Gun Min, and Alison Ragguette. 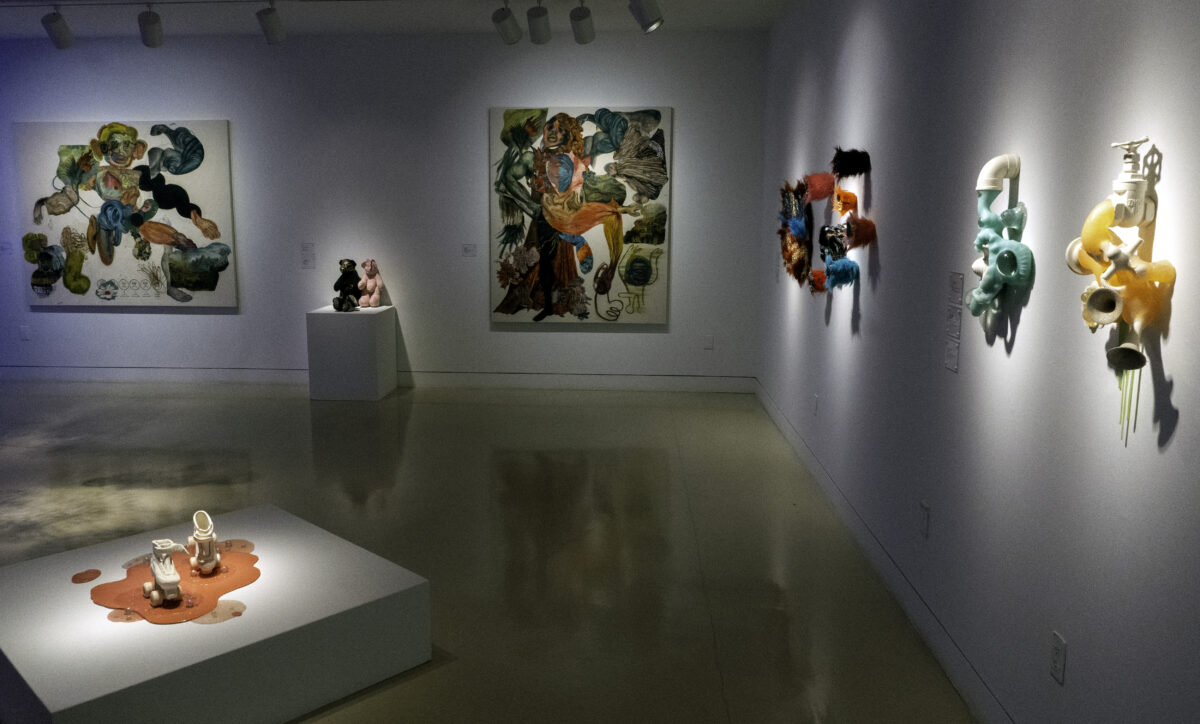 Work by Alison Ragguette, foreground and near right; canvases by Ken Gun Min; bears by Chuck Hohng; and textiles by Stevie Love. Photo by Jason Jenn

“The artists were chosen because of my familiarity with their body of work,” he says, as we stand in the center of the gallery. Each piece, Jenn feels, connects with the show’s title-slash-theme: “They immediately catch your attention because of their color, because of their brightness, and because they draw you in. They look pretty. And then, as you look closer, you realize that there’s a deeper meaning behind it; it’s more than just colorful works: sometimes the stories are sad or have a darker element to them, and sometimes they critique certain elements in society, certain issues.” The subtext, if we may call it that, is not always apparent. Some of it we may discern, and some of it we may need to intuit and come to our own conclusions.

A curator worth his or her salt has a decorator’s eye, knowing that how the work is arranged will precipitate certain dialogues, not only between the viewer and the art, but between the individual pieces on display. There’s truly an art to presenting art.

“It’s a show that I’ve been thinking about for a while,” Jenn says. And what he means is that he’s not only looked at a lot of work but best decided how it interacts with each other.

However, the theme of “Even Sparkles Have Shadows” was filtered through another lens as well. Remember, Jenn is the museum’s outreach specialist.

“This show was influenced,” he continues, “by how people present themselves on social media and how things might look really sparkly, or people are smiling, but you know that there’s a story behind it. People are presenting one aspect, but there’s always something more. That’s how social media is. And so I was thinking about how these artworks work in a similar way—they are shiny and bright and they put on a good show. Sometimes the story beneath it is just as compelling or adds a whole other dimension to the surface.”

To help us along in deciphering some of that backstory, viewers can scan a QR code or go to the museum website “and pull up more of the stories beneath the images.” 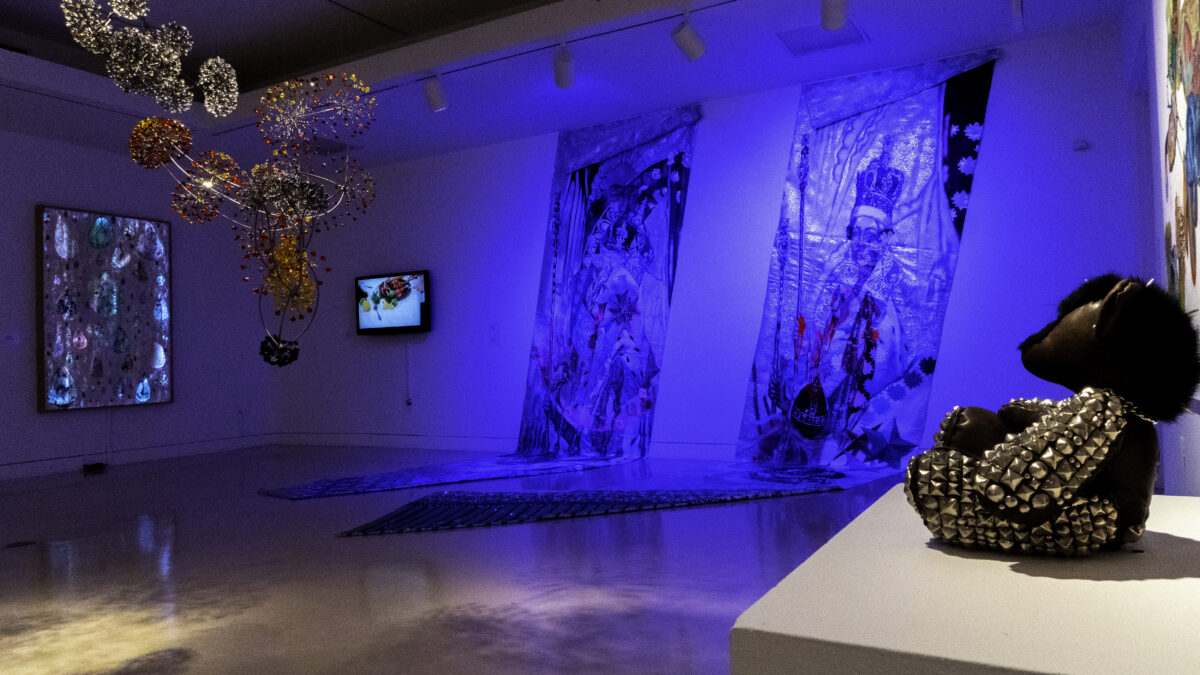 Then there’s the arrangement of the gallery, which is far from accidental. “When you walk into the room you immediately see the brightness,” Jenn says. But then, when you invariably look to your left, two of the four walls are not illuminated by track lights, but rather are self-illuminated, and in one instance, the two tapestries by Monet Feeney, illuminated by blacklight.

“There’s a concept here of sparkles and shadows, and I really wanted to create a space that was in a way immersive and an unusual installation of works.” Jenn has achieved this, insofar as that’s possible in a room of this size.

The Torrance Art Museum created several online programs during the interim, but the doors have been closed to the public for 16 months. For Jenn, this wasn’t entirely a loss.

“I’m grateful for having a year to add in a few things and to fine-tune the creation. I knew what the concept was, I originally had six artists involved, and then I added two more that I thought really fit.”

Apart from two large painted canvases by Ken Gun Min, everything else, wall-mounted pieces, a hung-from-the-ceiling piece, and a stand-alone on the floor, are comprised of mixed media. One of Stevie Love’s wall pieces, looking a bit like a small, multicolored throw rug, could in itself represent the theme of the show: “It has a story behind it that’s darker and deeper,” Jenn says. And the backstory? Love’s storage unit, behind her home, burned in a fire and 30 years of artwork was destroyed. But later, according to Jenn, “there were these juniper bushes that started to sprout again. So, symbolically, for her, it had this element of new life from the fires. From tragedy, new life.” And now, knowing this, we can make out the “shadows” behind the “sparkles.”

Min’s paintings are apparently a critique of “hyper-masculinity and men on Instagram who really work on their bodies and are pumped up and overly sexualized. He’s sort of made a critique on that,” Jenn adds, “because he works out himself.”

Min’s canvases are muscular as well, but then Jenn had the idea of placing three of Chuck Hohng’s teddy bears between them. Having seen several of Hohng’s bears many years ago I suspect that by now he has more than enough to equal the terracotta warriors of Qin Shi Huang. Of course these little fellows, sewn from repurposed materials, are not the cuddly playthings of one’s youth, or rather they combine that with something entirely different, an adult maturity grafted onto them. And unlike what one finds in a department store, each one has its own personality or character. 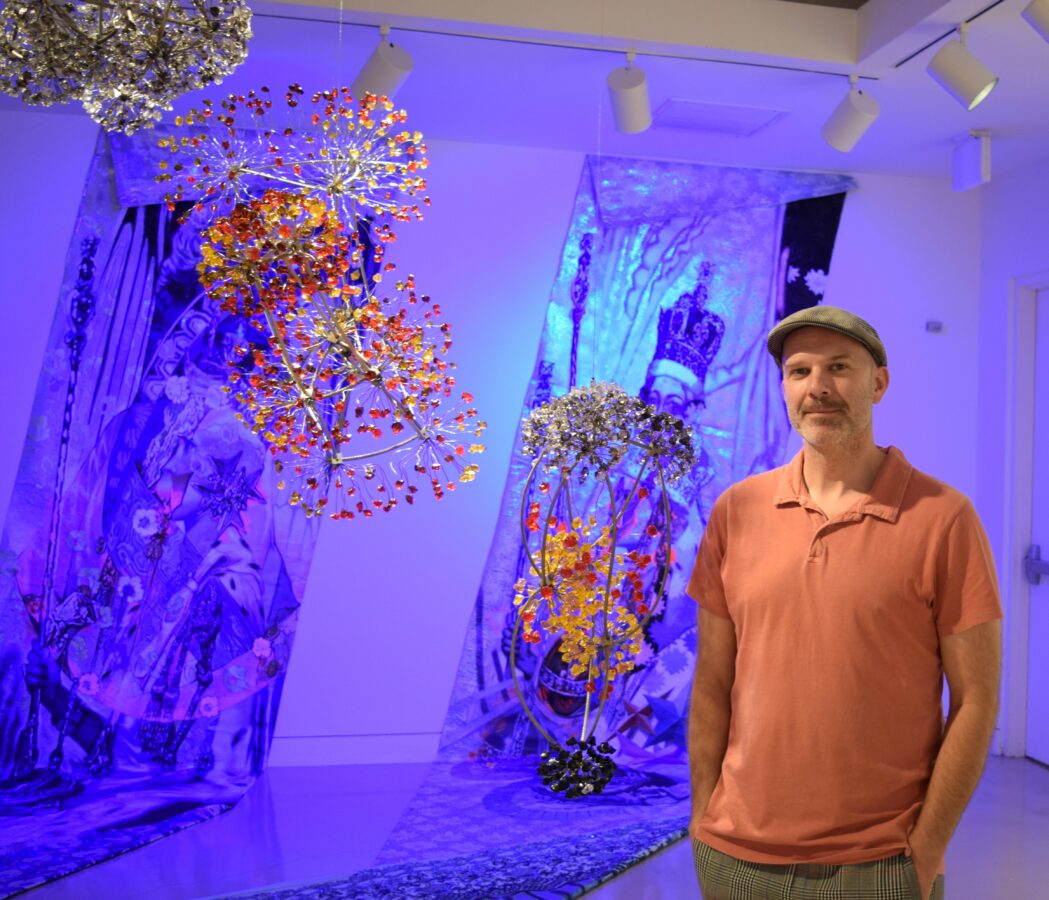 Jason Jenn, curator of “Even Sparkles Have Shadows.” Photo by Bondo Wyszpolski

The cellular cluster by David Hollen that appears to have seeped out of the ceiling and blossomed into organic chandeliers was created pre-pandemic, but through our pandemic-weary eyes we may see them as viruses and, yes, as a direct response to COVID-19.They go well with Zära Monet Feeney’s two tapestries, which cascade from the wall and onto the gallery floor. Under blacklight they are quite enchanting. There’s a critique here, too, of colonialism and aristocracy, and Jenn points out the crown, or corona, which perhaps alludes to you-know-what.

Impressive as well are the three vertically-mounted rattlesnake skins, each one illuminated from underneath in a different softly-glowing color, that Michael Craig Carrier has repurposed into artworks. He lives in Temecula and apparently has found these shedded skins while out walking. “He likes to take material and give it new life,” Jenn says. “He’s a very environmentally-conscious artist.” One is tempted to reach out and stroke the textured surfaces, which makes me think that there should be a little rattling noise if the viewer gets too close. These pieces are effective because they entice us and yet we usually think only of drawing away when we think of rattlesnakes.

Next to Carrier, Jenn has placed a large work, also textured, by Haleh Mashian. The myriad teardrop shapes literally represent tears (another backstory for you to uncover), but the large work, also softly illuminated from within, is gently reminiscent of the Viennese Gustav Klimt.

The one work that will be hard to miss is by Alison Ragguette, and it depicts a pair of skates perhaps ensnared in some molasses-like goo, or as Jenn remarks, “We’re skating along in life and suddenly we’re stuck in the gum.” Some people might look back over the past year (now that we have 20/20 hindsight about 2020) and say that this pretty much sums up what we’ve all been through. And we’re not out of the goo or the gum yet, are we?

“Even Sparkles Have Shadows,” which is just one aspect of “Ultra!” is quite a lovely bouquet and highly recommended. As for the rest:

Ultra! Is a community-based public art exhibition which opens at 12 noon on Saturday. Over 20 artworks from contemporary artists are dispersed throughout the city. Maps are available at the gallery or online. Several performances are scheduled for the afternoon as well as during the run of the show, which closes on August 28. Hours, Tuesday to Saturday from 11 a.m. to 5 p.m. Free. Call (310) 618-6388 or go to TorranceArtMuseum.com. ER