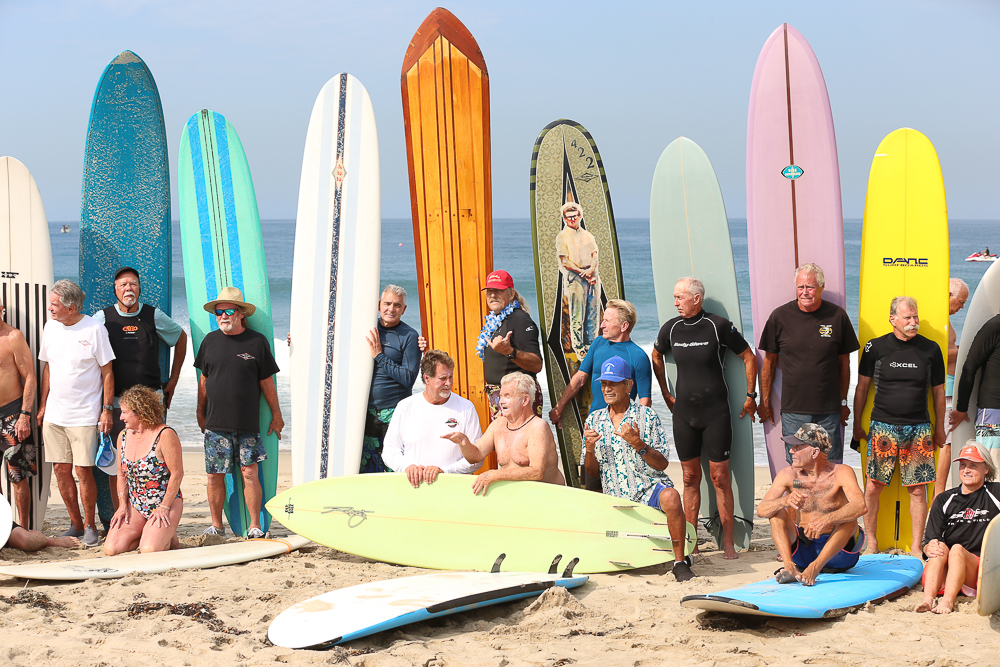 Don Craig and Mike Purpus, (center, kneeling) were among the Hap Jacobs team riders who participated in a memorial paddleout for Jacobs on Thursday (Sept. 8) at the Hermosa Beach Pier. Photo by Mike Balzer

Dudley “Hap” Jacobs is acknowledged, along with fellow Hermosa Beach surfboard shapers Greg Noll, Dewey Weber, and Bing Copeland, as among the greatest shapers  from surfing’s Golden Era, in the late ’50s and early ’60s.

That sentiment was expressed in different ways by all of the more than 100 surfers at the paddlout, who spanned over six decades of surfing.

“Gentleman,” was the word used most often to describe Jacobs.

The paddleout was a tribute to both Jacobs’ character and his craftsmanship. The boards brought to the paddleout, dating back to a noserider used in the 1965 C Street Longboard Contest, rivaled the best surfboards made today. Recognition of that fact was evident from the contemporary surfboard shapers who attended the paddleout. They included Jon Mangiagli, Pat Ryan, Jose Barahona, Tyler Hatzikian, Matt Calvani and Adam Davenport.

Jacobs passed away in December 2021, at his Hermosa Beach home, at age 92. ER