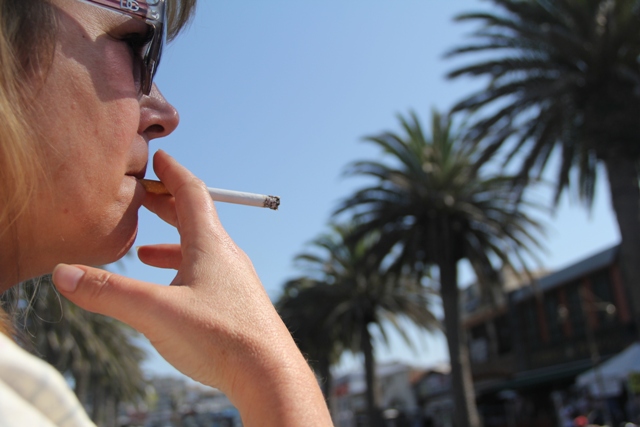 Hermosa Beach made smoking in public illegal 10 years ago. Now it may be asked to legalize retails sales of cannibas products.. Photo by Alene Tchekmedyian

The initiative is funded by the Economic Development Reform Coalition of Southern California, which has similar initiatives in neighboring Redondo Beach, Manhattan Beach, and El Segundo.

Chacker’s initiative would limit the number of commercial pot retailers in the city to two, and prohibit cannabis retailers from outside the city from doing business in Hermosa Beach. It establishes a point system for selecting successful license applicants, provides for complaint mitigation, and requires business operators to establish a “neighborhood compatibility plan” to allow city officials an additional measure of control over activities.

It also specifies that the city “shall not assume any liability whatsoever” as a result of issuing a commercial cannabis business permit.

Hermosa Beach Mayor Mike Detoy has asked his council colleagues to take up the matter at its Dec. 14 meeting, when the panel will consider a draft cannabis ordinance being prepared by staff. The council also will “address how the city may maintain its existing ban on cannabis retail,” according to a future agenda notation.

Once the city has issued the initiative’s official title and summary, proponents can begin the quest for signatures of 10 percent, or approximately 1,400 of the city’s registered voters needed to qualify the initiative. If a sufficient number of signatures are gathered by May, 2022, the initiative will qualify for the November 2022 ballot, according to Los Angeles attorney George Yin, a proponent of the initiative.

Damian Martin, who is working with Yin, and who drafted the Hermosa Beach Cannabis Regulation and Public Safety Measure, said this week,“I have helped to shape beneficial, and reasonable, local cannabis policy in Southern California, and my regulatory language has become the law of the land in multiple cities, including Culver City, Pomona, and El Monte.” ER