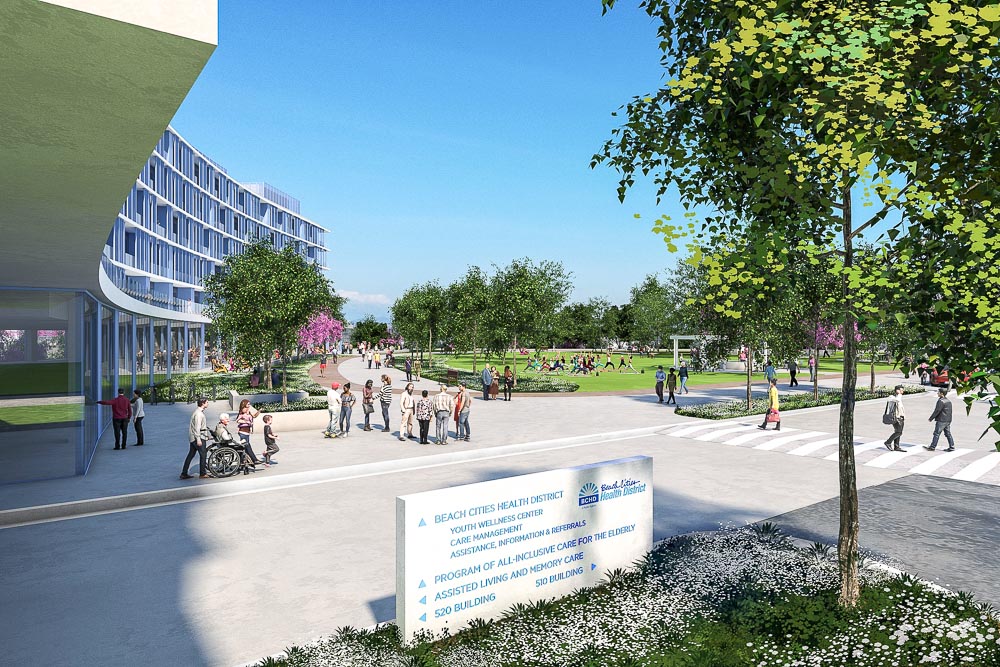 With Wednesday’s release of the nearly 1,200 page Healthy Living Campus draft environmental impact report, the Beach Cities Health District reaches a decisive turning point, for the second time since its founding in 1955.

Murdoch’s renderings show a white, circular Community Wellness Pavilion, surrounded by 2.5 acres of grass. The perimeter is rimmed by youth and senior centers and 220 senior residential care units, laid out in the shape of an arch.

The sharp break from the original hospital’s boxy, Bauhaus architecture is symbolic of a sharp change in the district’s direction.

At the end of the Draft EIR’s 90 day comment period, on June 10, the BCHD’s elected Board of Trustees will vote on whether or not to move forward with the project.

BCHD is one of 24 “special district” hospital agencies in California that have no hospital.

South Bay Hospital, which the district was formed to fund in 1955, closed in 1998. But the district’s property assessment did not stop. The district collects nearly $4 million annually in property taxes from the three Beach Cities. 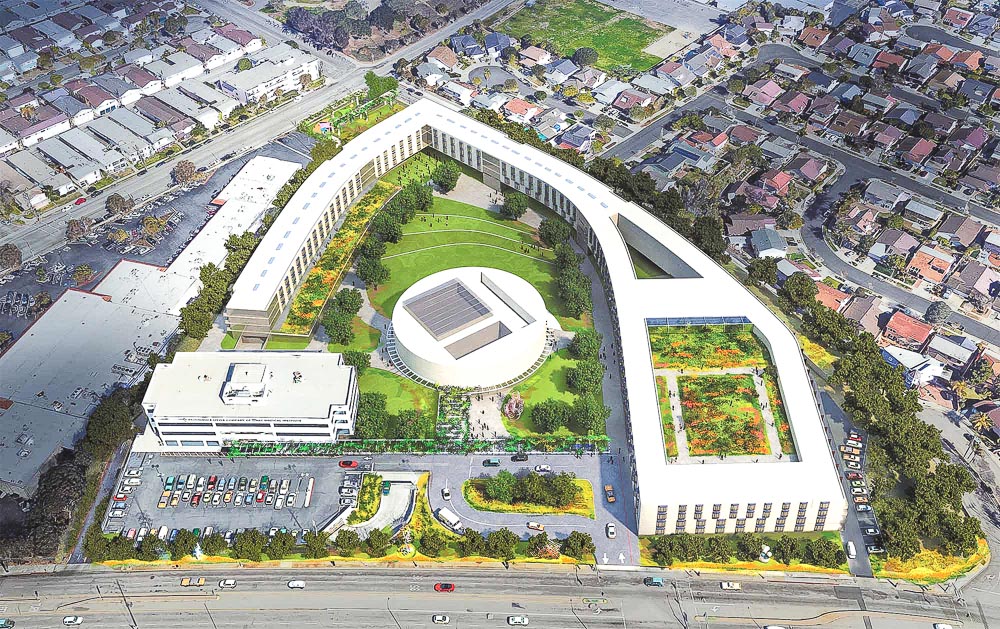 An early rendering of the Healthy Living Campus showed 420 senior assisted living units. The number has since been reduced to 220 units. Renderings courtesy of the Beach Cities Health District

Shortly before South Bay Hospital’s closure, its board of trustees adopted the name Beach Cities Health District and refocused its effort on preventative, community medical services.

Current programs range from obesity prevention for school kids, to counseling and support groups for all ages, and senior programs, such as PACE (Programs of All-Inclusive Care for the Elderly).

The largely free programs are funded not only by property assessments, but also leases, partnerships, grants and BCHD’s health and fitness facilities. The property assessments represent a little more than one quarter of the district’s $15 million in annual revenue.

Should the board decide in June to move forward with the Healthy Living Campus, the district’s services and revenue will expand, significantly.

BCHD CEO Tom Bakaly describes the Healthy Living Campus as providing “a sense of place” for the community. An indoor pool is planned for the ground floor of the Community Wellness Pavilion. Upper floors would include a fitness gym, a demonstration kitchen and meeting and research facilities.

Bakaly sees the campus becoming a center for research projects, such as the three-year “Healthy Minds Study,” which the district recently funded. The study is enlisting 500 Beach City residents, to determine the impact active and passive lifestyles have on cognitive and psychological health.

A Youth Wellness Center will provide study and socializing facilities and medical and mental health services. BCHD has been approved for a $500,000 grant for youth psychological counseling services from Stanford University’s allcove Project.

The 2.5 acres of open space is designed for exercise classes and informal gatherings.

The 220-unit Residential Care for the Elderly (RCFE) facility represents a “continuum of our programs for older adults,” Bakaly said.

The Healthy Living Campus evolved from a 2009 board discussion about future uses for the district’s 11 acres, nearly half of which is parking lots and undeveloped hillside. The board was also concerned about the seismic fitness of its 60-year-old, former hospital, which is now home to 60 Silverado Memory Care residents, as well the district’s fitness gym and leased offices.

The board initially proposed developing 420 independent living, senior apartments. They would serve the dual purpose of housing seniors and funding the district’s expanding health services. In 2019, in response to neighborhood complaints about the proposal’s density, the district reduced the number of senior units to 220, (which includes the 60 existing Silverado units). It also changed the proposed use from independent to assisted senior living.

Beach City residents approved creation of the South Bay Hospital District by a vote of 4,321 to 824 in 1955. But the board is not expecting similarly unanimous support for the Healthy Living Campus, judging from Trustee Vanessa Poster’s response to a reporter’s request this week for an interview. Poster was reelected to a sixth term last December and participated in the Healthy Living Campus’ beginning discussions.

“We are channeling all the press through staff,” Poster responded by email to the interview request.

In addition to concerns about traffic, the project’s opponents contend the projected $12,000 a month rent is beyond reach of most of the residents the district was formed to serve.

Bakaly said the high rates are an unintended consequence of having reduced the number of senior care units by roughly 50 percent.

“A lot of this is about trade offs,” Bakaly said. “We’re trying to balance health needs, financial needs, and concerns from the neighbor.” ER

Public comments on the Healthy Living Campus Draft EIR will be accepted through June 10, 2021.

Comments may be submitted:

Comments may also be given at public hearings to be held at the Beach Cities Health District on the following dates.:

More information about the Healthy Living Campus can be found at bchdcampus.org./eir. ER