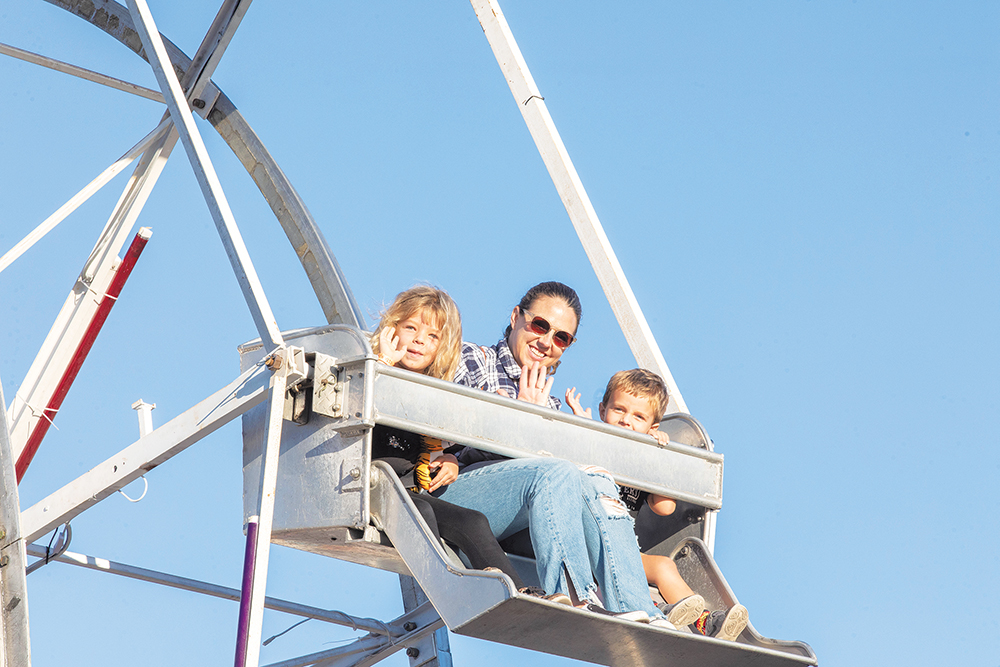 Kids rides, including a carousel, and a ferris wheel, craft beers, and live music proved popular in The Garden, despite an entry fee being charged for the first time. Photos by JP Cordero A “reconfigured” Fiesta Hermosa Locale with a considerably smaller footprint, and customized to accommodate pandemic restrictions proved popular with many downtown business owners and residents.

But the four-day event over the Labor Day weekend likely will return to its “traditional,” more expansive format of past years, according to Jessica Accamando, president of the sponsoring Hermosa Beach Chamber of Commerce.

In a Sept. 11 email to Easy Reader, Accamando wrote of the recent event, “We don’t have final figures yet, nor a measure of success other than local businesses saying how great it was and their sales reports. Our plan for Memorial Day will be to go back to a more open event that’s traditional, but we’re welcoming feedback from any of the new changes we made.”

The smaller version of the twice-annual fiesta was also a response to “longstanding complaints from residents and businesses about street closures and a lack of local vendors,” according to previous reporting.

For the scaled-down event, the chamber for the first time charged admission — $25 — to the “Garden” for beer, food and kids’ rides. There were none of the usual street crafts  booths on Pier and Hermosa avenues. A curated art exhibit was held on the Community Center lawn. The only street closure was one block of Hermosa Avenue, between 11th Street and Pier Avenue. In previous years, all of the downtown has been closed to traffic to allow for crafts and exhibit booths.

The “final figures” to which Accamando refers will show significantly reduced income compared to last year’s fiestas, when the chamber banked about $300,000.

In a subsequent email, Accamando noted the chamber’s board of directors “hasn’t even started discussions of the next Fiesta. But this past Fiesta was a modified event. It was never intended to be a new format.”

Early responses to a survey by the chamber of its members and other interested parties “seem to suggest… that businesses in general seemed to be really great that weekend,” Accamando wrote.

Gum Tree owner Lori Ford said sales in her downtown shop doubled over the previous Fiesta, and her café sales were up 30 percent.

“The sidewalks along upper Pier were lively for the first time in years on Fiesta weekend,” she added. “I would attribute this to the Art Fair and shuttle stop at Pacific Coast Highway and Pier. The crowd felt more local as well, a much more pleasant experience for our staff. I’m looking forward to hearing from our other downtown Hermosa businesses.”

“We’re only one business. Some others may have had it much better in previous years. I think the chamber is going to do the right thing, based on the data.”

The two versions of Fiesta will provide “a barometer” to help determine community opinion, said Ford, “and provides a chance to balance interests.”

Accamando, too, seeks a balance.

“My job is to serve our business community, so on that we did well,” she contended. “But we also aren’t trying to completely change tradition. So lots of discussions have to happen about how to preserve the support for local businesses while also preserving the spirit and fun of Fiesta.” ER