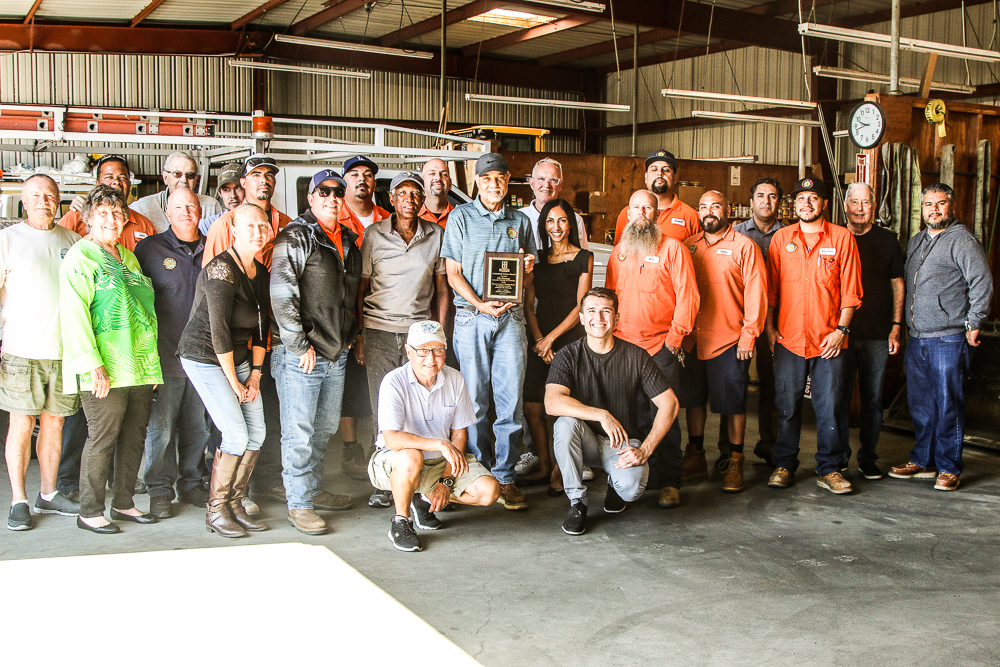 Ells Freeman (center) with his Kiwanis Community Service Award. He is flanked by his public works crew and Hermosa Kiwanians. Photo by Kevin Cody

Over the past 12 months, Hermosa Beach has received a beauty makeover. Flowers have replaced ice plant in Noble Park and the shrubs on the Hermosa Avenue meridian. New lights were installed on Pier Plaza and added to the 13th Street mural. And new trees on the Greenbelt have created a canopy that give joggers the feeling they are running through a sun dappled forest.

Credit for the improvements goes to the city’s 15-member public works department, which has  been without a permanent director for the past year. Filling that vacuum has been public works superintendent Ells Freeman, who joined the city in 1987.

Last week, in recognition of his department’s work, the Hermosa Beach Kiwanis Club presented Freeman with its Community Service Award. During the awards luncheon at the public works yard, City Manager Suja Lowenthal thanked Ells and his department not only for the aesthetic improvements, but also for keeping residents safe.

“Things like fixing the sidewalks and streets prevent accidents,” she pointed out. After a decades long delay, the city has nearly completed installing sidewalks on 8th Street, between Hermosa Avenue. and Valley Drive.

Freeman said the aesthetic improvements are ongoing. Catenary (suspended) lights will soon be added down the middle of Pier Plaza and he hopes to improve lighting of the John Van Hamersveld Surf mural on 14th Street. Because of complaints about the Pier Plaza lights being too bright, they will be put on dimmers. The greenbelt will be getting still more trees and his department will continue putting out two to three memorial benches a month, each with a memorial plaque.

“We’ve got a talented crew. But I’m looking forward to having a new public works director,” Ells said. ER