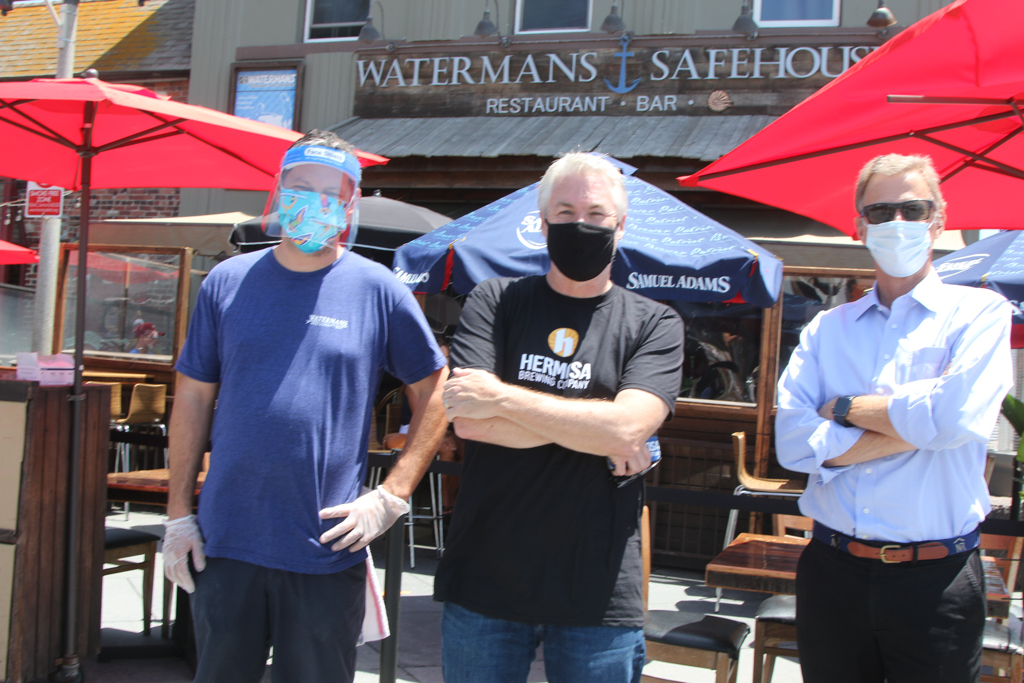 Throughout the pandemic, Hermosa Beach explored new ideas to help beloved businesses make it through the tough times, some of which changed the very look of the city.

Gyms and fitness studios were among those to take advantage. Closed at the beginning of the pandemic, then briefly allowed to resume indoor operations, Gov. Gavin Newsom once again closed gyms in early July as COVID cases began to soar again. Some, like Soho Yoga, a studio on Hermosa Avenue, began offering classes on the beach, just a block away. Others, like CrossFit South Bay on Fifth Street, made greater use of the outdoor space they already had.

“It’s just a constant moving of equipment: move it in, move it out, move it in, move it out. Sometimes the bars will get hot in the sun, so we’ve got to bring that one back in. And obviously the ocean air just rusts everything. But luckily, we’re a gym, and we’re used to moving stuff,” CrossFit South Bay owner Forrest Jung said in July.

For restaurants, the city waived many of the requirements typically imposed on applications for outdoor usage, including the need to go through a public hearing before the Planning Commission. The city began processing applications for outdoor dining, which became more in demand when the council voted to expand the space available for “dining decks” on Hermosa Avenue, and later on Pier Avenue. (Indoor dining was briefly allowed in May, but was shut down after cases began to rise, and has not been permitted in the region since.) Numerous restaurants in the area benefitted from a GoFundMe and a donation from Hermosa resident Peter Nolan; together, they provided tens of thousands of dollars needed to pay the fees for the dining decks.

Creating the expanded dining spaces involved removing a lane of parking spaces in parts of the city, previously a political impossibility for fear of angering drivers. But the existential threat posed by the pandemic made it possible, and left some wondering if the changes might wind up being permanent.

Dave Davis, owner of Hermosa Beach Brewing Company on Hermosa Avenue, said Community Development Director Ken Robertson called him up and invited him to apply for an expanded dining deck permit. To his surprise, the permit was approved swiftly, and the decks were a boon to his business.

“Our regulars come by, the ones who feel comfortable going out to eat. But we’ve also had a lot of people say, ‘I’ve walked by here for two years, and this is our first time here,’” Davis said in September. “We’re discovering a whole new clientele.”

Hermosa Brewing and other restaurants were dealt another blow last month, when rapidly increasing case counts pushed Los Angeles County, and later the state, to ban outdoor dining. This week, an appeals court upheld the county ban, but Hermosa, like neighboring Manhattan Beach, has continued to allow people to sit on their own and eat on the dining decks that businesses put up.

Editor’s Note: This story has been updated to reflect the fact that it is a year-in-review recap, not a breaking news story.