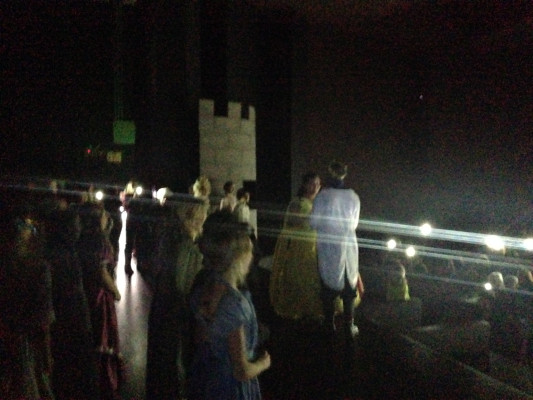 Phone lights light up the stage after a blackout halted a performance of Beauty and the Beast. Photo by Family Theatre Inc choreographer Keisha Wright

Tears of joy were flowing down the aisles during Sunday afternoon’s performance of Family Theatre, Inc.’s “Beauty and the Beast” after the power went out around town causing a blackout throughout the city, halting the cast’s performance on a pitch black stage.

The power outage in the theatre, caused by curious wild green parrots — soon to be electrocuted — conducting electricity between lines on an overhead power pole at 190th Street and Cluster Lane, hit two circuits in Hermosa Beach around 4 p.m. and affected 6,109 customers. In the theatre, the electricity cut during Belle’s dramatic final song to the Beast as he lay dying in her arms. The music stopped, the lights turned to black and the show seemed to be over. There was zero power for music or microphones. All seemed to be lost.

After a couple of minutes passed without a solution or power, 8-year-old cast member Dalton Greely said, “The show must go on!”

The over 300 people in the audience spontaneously stood up and supported the cast members by pulling out their cell phones and aiming the light at the stage.

The entire audience stood for the final ten minutes of the show with their cell phones casting enough glow to see their children and friends finish what they’d worked so hard to learn.

They sang a cappella and completed the final scenes in the semi darkness. When they finished, the ovation was thunderous and the emotion and tears were overwhelming.

The audience, backstage crew and the city theater staff were crying, along with the friends and family who came to watch. The resilience of the 40 or more cast members ages 4 to 14 was truly impressive, as was the love and support the audience gave them throughout their trying performance.

Perhaps it was theater at its absolute best, bringing the community together.

The blackout lasted four hours and the 6 p.m. show could not be performed, causing a different cast of children to miss their stage debut. Service was restored to customers by 7 p.m., a Southern California Edison spokesperson said. A second blackout that affected over 900 customers began around 3:30 p.m. and power was restored by 10:30 p.m., causing an additional 900 customers to go without power.

The show has been rescheduled it for Friday at 7 p.m. in the Community Theatre at 710 Pier Avenue. The theater company hopes people will support the kids who did not have a chance to perform what they had been learning for months, due to the blackout. ER