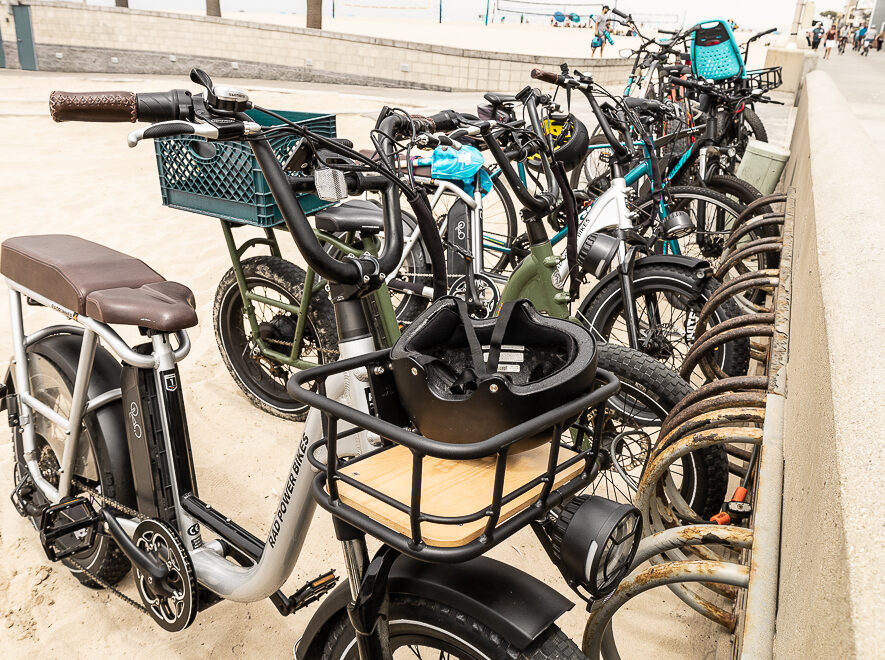 A bike rack on The Strand, at Second Street in Hermosa Beach. Photo by Kevin Cody

This past Fourth of July, the Hermosa Beach police set up a sting operation on the Hermosa Beach Strand. Their targets were riders of electric bicycles using pedal assist to exceed The Strand’s eight mile per hour speed limit.

Officers on either side of the pier radioed descriptions of speeding e-cyclists to officers at the pier, where a flashing red light signals bicyclists to walk.

“Some people got in our faces, demanding to know if we didn’t have better things to do. Some people applauded,” Police Chief Paul LeBaron said during an interview last week. 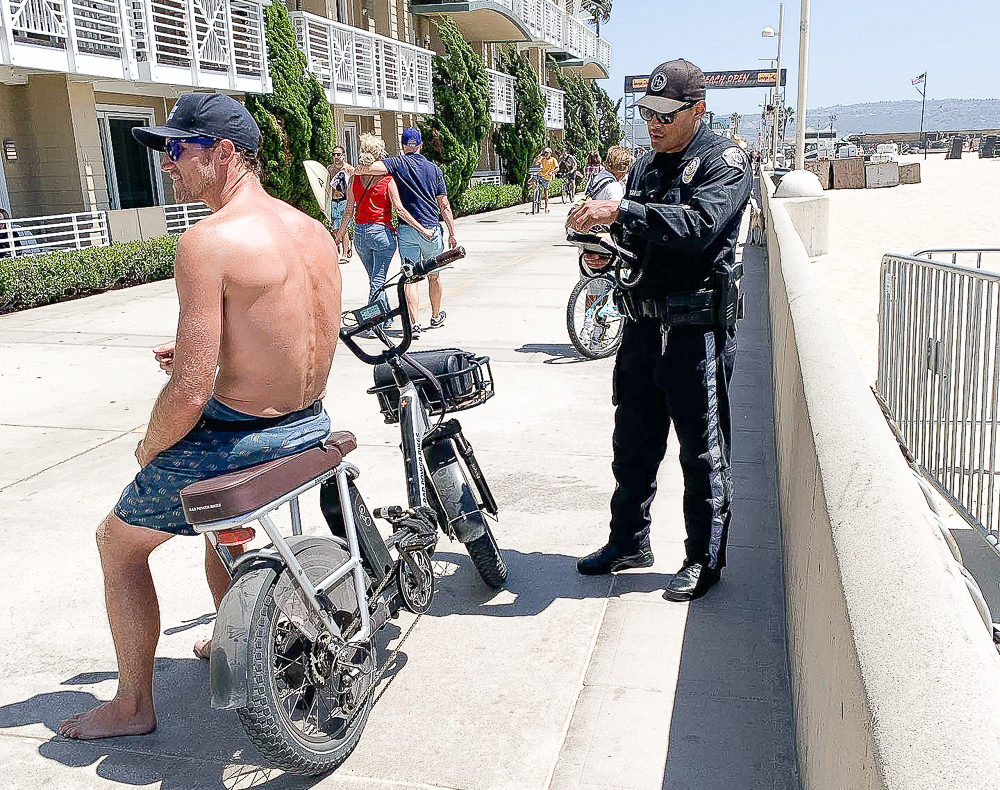 Hermosa Beach Police officer G. Rodriquez cites an e-bike rider during an enforcement crackdown on the Hermosa Strand on the Fourth of July. Photo courtesy of the HBPD/FB

E-bikes have become an increasingly polarizing issue in the beach cities, especially on the Hermosa Strand. Letters to the Editor writers demand more citations be issued for speeding, and running stop signs. E-bike proponents, whose numbers have grown to rival pedal cyclists, cite e-bikes’ health, environmental and convenience benefits. No more circling the block looking for a car parking space. No more parking tickets.

In the first quarter of 2021, coinciding with the one year anniversary of the pandemic, e-bike sales were up 162 percent over the preceding year’s quarter, according to the NPD Group (New Product Development Group).

Nationwide, police are caught in the middle of the e-bike debate. Locally, the debate is focused on kids on e-bikes, and e-bikes on The Strand. Nationally, it’s over e-bikes on hiking trails, where use increased 50 percent during the pandemic, according to the Rails-to-Trails Conservancy.

During a presentation to the City Council on Tuesday, August 9, Hermosa Beach Police Chief Paul LeBaron characterized his department’s response to e-bikes as emphasizing education over enforcement.

Educational strategies he mentioned include electronic warning signs, contacting parents of juveniles who violate traffic laws, working with the school district at bike rodeos, and telling bike store owners to warn customers electric assist on The Strand is illegal. 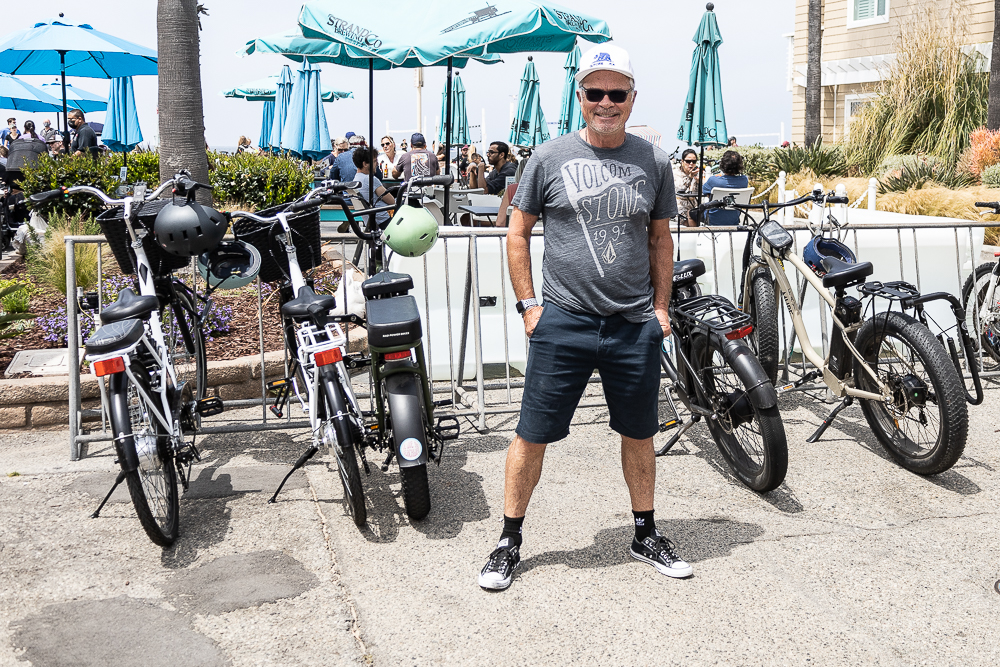 Cris Bennett, owner of the newly remodeled Good Stuff on The Strand offers plenty of parking for e-bike customers. Photo by Kevin Cody

At the same council meeting School Board President Stephen McCall told the council of a bike education  program developed by Valley School students.

“We knew if adults developed the program, kids would ignore it,” McCall said.

The students produced two bike safety videos, and came up with the acronym SMART (Snap helmet. Make sure to look both ways. Always follow the rules. Remember to stop. Take your time).

During last week’s interview, following the August 9 council meeting, Chief LeBaron underscored his department’s emphasis on education, rather than enforcement.

“When we see a kid leaving school with a helmet, we’ll high five him to give positive reinforcement. If there’s a helmet on the bike that’s not being worn, we’ll encourage them to put it on. If there’s no helmet, or if a kid’s being egregious, we’ll contact his parents.”

Some parents are appreciative. Some parents get upset, and challenge the legality of the stop, he said.

The chief said he is not aware of any serious accidents involving e-bikes in Hermosa Beach, but added he

believes e-bikes are more dangerous than pedal bikes because of their weight and speed. But he declined to suggest at what age kids should be allowed to ride electric bikes.

“I’ve seen reckless riding by adults, as well as kids. The X factor is the rider,” he said.

His department does not have statistics on how many e-bike traffic citations have been issued, he said.

“Vehicle violation stats are based on the vehicle code. They don’t break out if the citations are for  bikes, cars, motorcycles, skateboards, or scooters,” he said.

In January of this year, former Hermosa Beach Councilmember Jim Rosenberger submitted a public records request to the City Clerk’s office, asking, “How many tickets in the Downtown Strand have been issued to electric bikes in the past six months?”

The City Clerk’s office responded, with a letter stating, “Attached is a copy of the single citation that was issued to an electric bike in Downtown Strand within the last six months.”

Redondo Beach police, when asked about the e-bike enforcement, also did not offer numbers for citations issued. But in May, the department began tracking e-bike collisions. According to Redondo Police Detective Scot Martin, Redondo police responded to three e-bike traffic collisions in May, two in June, none in July and one in August (as of August 16).

Detective Martin said one of the e-bike accidents was with a pedal cyclist. He said auto drivers were responsible for most of the other e-bike collisions.

Redondo e-bike programs are in response to residents’ complaints about e-bikes.

“It’s a complex issue,” Hermosa Chief LeBaron said.  “If we’re standing there, in uniform, e-bike riders obey the law.” But it’s hard to measure how many e-bike riders are obeying the law because of the department’s education efforts, he added. 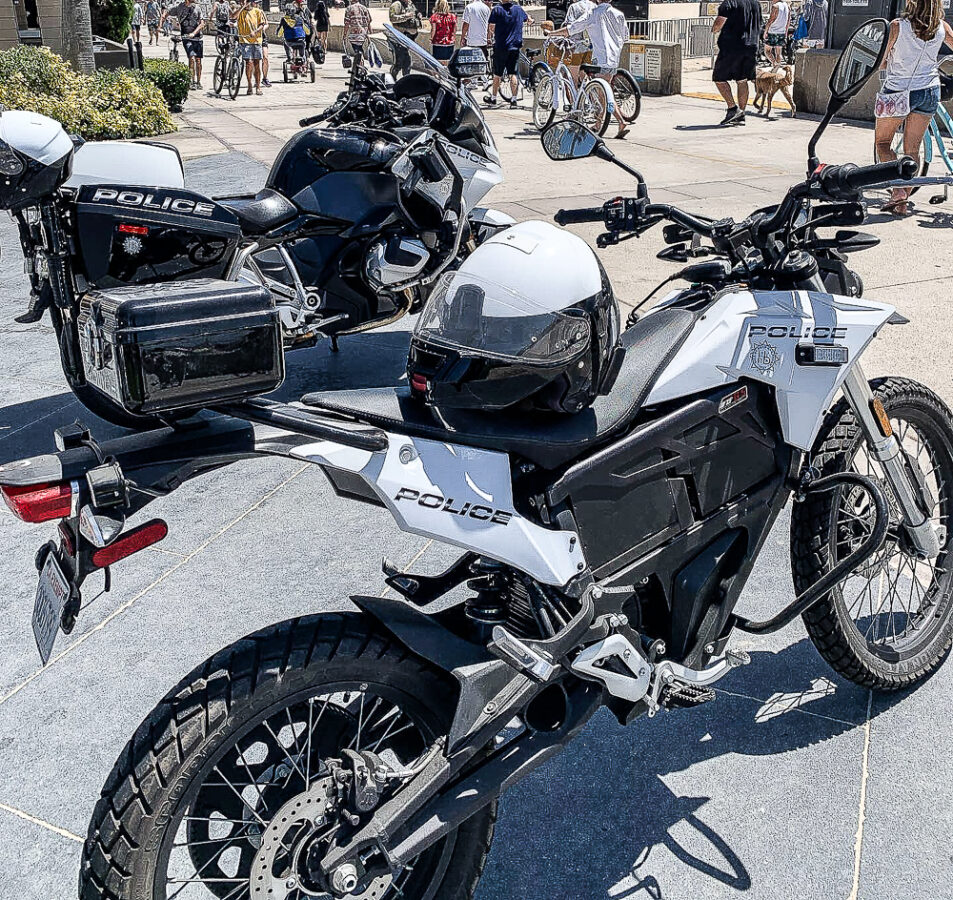 A HBPD electric motorcycle patrolling the Hermosa Strand on the Fourth of July. Photo courtesy of HBPD/FB

Trick Electric Bikes in downtown Hermosa Beach is one of the e-bike stores working with Hermosa police. Owner Cliff Hough opened the story in January and has struggled to keep up with demand for both sales and rentals. This past Sunday, at 4 p.m., all 20 of his e-bike rentals were out.

Hough recently hosted a bike registration day at his store.

“The police set up a tent and entered bike registration numbers in their system. So, if a stolen bike is recovered, police can find the owner,” he said.

Hough said he warns his customers they will be ticketed if they use electric assist on The Strand. His suggestion for solving the problem of e-bike speeders on The Strand is to put police on The Strand, on e-bikes.

“I was on The Strand last night. Kids were screaming by at 20 miles per hour. I’d do what police do to stop drunk driving. Set up e-bike checkpoints,” he said. ER