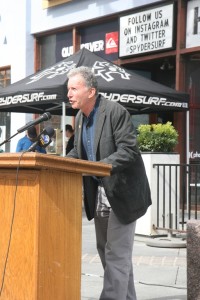 Mayor Howard Fishman lauds the city's outdoor smoking ban on the Pier Plaza, one of the affected areas. Photo by Robb Fulcher

Hermosa Beach City officials and public health agency representatives gathered on the Pier Plaza to promote perhaps the most aggressive outdoor smoking ban in the region, which begins Thursday, March 1 (see map below).

The ban, approved by the City Council four months ago, nixes smoking at all of Hermosa’s outdoor dining areas, the popular Pier Plaza, the city pier, the Strand, the greenbelt parkway, and all city parks and parking lots. Smoking already is outlawed on the city-owned beach.

“With our outdoor lifestyle, the small minority who smoke in public places threatens the health and safety of the majority of our residents, visitors and workers who don’t smoke,” Mayor Howard Fishman said.

The ban will provide “a breath of fresh air” to diners, residents and visitors, Fishman said.

Violators of the ban can be fined $100 to $500, and after a third police citation, a misdemeanor criminal charge can be sought. Fishman said officials hope to avoid citations, and proponents of the ban have predicted it will be self-enforcing.

“Though California has some of the strictest laws in the nation regarding tobacco control, state law falls short when it comes to protecting the public from secondhand smoke in outdoor public gathering area. It has been left to cities to address this issue and to take necessary steps to more fully protect the health, safety and welfare of its residents and visitors from the well-documented harms of second and third hand smoke,” said Councilman Jeff Duclos, the city’s mayor pro tempore.

Public health officials have identified third-hand smoke as solid residue that settles onto furniture, clothing and other surfaces.

“We also cannot ignore that fact that the overwhelming majority of Californians – nearly 87 percent according to one report – are non smokers. They are entitled by law to full and equal enjoyment of public accommodations,” Duclos said.

“Something like 70 percent of smokers would quit if they could,” said Duclos, adding that the outdoor smoking ban could provide extra “incentive” to kick the habit.

Lisa Santora, chief medical officer of the Beach Cities Health District and a Hermosa resident, said she could now bring her 1-year-old son to the pier without subjecting him to possible health problems.

Santora, who is pregnant, said she could now dine on the Plaza without increasing the risk of a lower birth weight or premature birth for her unborn child.

“I can’t tell you how happy I am,” said Craig Cadwallader of Surfrider Foundation. “This has been a long struggle.” 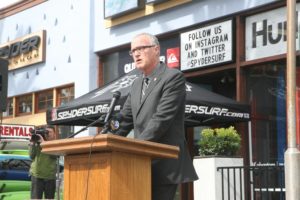 Banners announcing the ban were being hung on the Strand and throughout the city, and volunteers began carrying posters, table tents and coasters to restaurants with outdoor dining. County officials shouldered the costs of those materials.