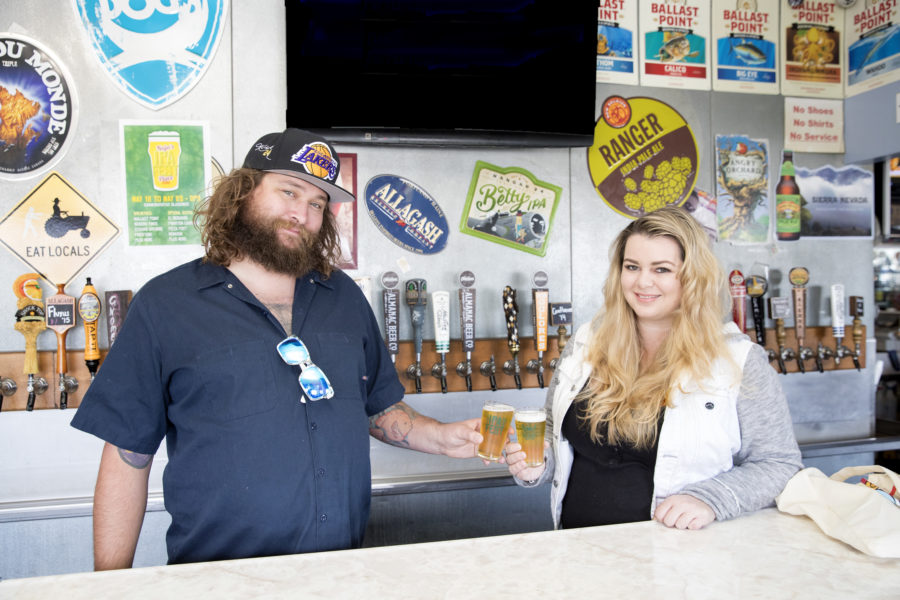 It’s time to put “beer geek” to bed. As the craft beer movement merges with the mainstream, we’ve all become a bit beer geeky. Whose palate has not gotten somewhat more sophisticated?

Naja’s Place has long been credited as a major influence in the tapping of the South Bay’s beer taste buds. Long before IPAs became the most sought-after beer among beer connoisseurs new and old, Naja’s was throwing its week-long IPA Festival, inviting all hop-centric breweries to bring their best.

For those who still clench a macro light beer, IPA stands for India Pale Ale, a beer originally brewed to stay fresh while being exported from Great Britain to Colonial India during the early 1800s. In alcohol content, single IPAs average 4 to 6.5 percent, double or Imperial IPAs average 7 to 10 percent, and the more rare triple IPAs are 10 percent and higher. IPAs, because of their hoppy flavor, welcome endless flavor variations.

Ousten has been at Naja’s since the beginning of its transformation from a bar with internationally exotic beer offerings to an IPA heaven. The bar, founded by the legendary Najah Zeinaty in 1981 and originally unusual in that it carried 77 beer handles and another 777 bottles from around the world, later evolved as a mecca of the American craft brew universe.  Ousten and his wife Kara Smail  (the craft beer love affair of the decade, the couple met working at Naja’s) have been at the helm of Naja’s beer voyage.

“I like to think of us as the frontier of great beer,” said Smail, in her thick Australian accent.

When the popular Sculpin IPA, brewed by San Diego’s Ballast Point, made its debut over eleven years ago, the then-independent brewery had the facilities to only make small batches.

“We were lucky to be one of the first bars to get our hands on Sculpin in L.A. County,” said Ousten. “From the get-go, we knew good beer.”

Another brewery Naja’s first took notice of was Strand Brewing Company. The Torrance brewery holds a special place for Naja’s, which was the first bar to carry its beer back in 2009, when Strand owners Rich Marcello and Joel Elliot brewed their very first batch and sold the beer at Naja’s in three (borrowed) kegs.

The palate that set the sails in the South Bay’s craft beer scene. Jay Ousten sipping from the IPA Fest’s commemorative glass. Photo by Brad Jacobson

“They supported us since our inception. Naja’s was and is on the forefront of the West Coast IPA revolution that has almost taken over every beer conversation in the last decade,” said Marcello.

At last year’s IPA Festival, Naja’s offered five variations of Sculpin, introducing what would later become the nationally popular Grapefruit Sculpin. This year, Ballast Point will be brewing a cask of a surprise variation of Sculpin. Some say craft beer is at its best fresh from the cask —  the brewing process is unfiltered and self-contained in the cask, producing a live beer, bursting with flavor and character.

“We invite the best breweries to bring out their top IPAs, all types of IPAs,” Ousten said “This includes rare and never made IPAs.”

El Segundo Brewing Company will be contributing a few of its signature IPAs, including a first-time release of a fruit-infused Mayberry IPA. Carson’s Phantom Carriage Brewery will be tapping its single IPA, Mad Plumber, a collaboration with Los Angeles’ Pipe Dreams Brewery. Redondo Beach’s King Harbor Brewing Company just finished its Toast & Jam DIPA, a black double IPA infused with blackberry brewed specifically for the festival. Musashi, Black Sand, and White Sand, are Strand’s IPA offerings. Just up the hill from Naja’s, on 190th Street, the recently opened HopSaint Brewing Company —  which opened just last year and has already become one of the most critically acclaimed beer destinations in the area — will for the first time release a beer outside of its restaurant and brewery.

“We’re all brothers in brew,” said Ousten. “We are very supportive of each other. That’s why you see a lot of collaborations between what may seem like competitive breweries and bars. Everybody has their own unique perspective that overall adds to the entire community.” 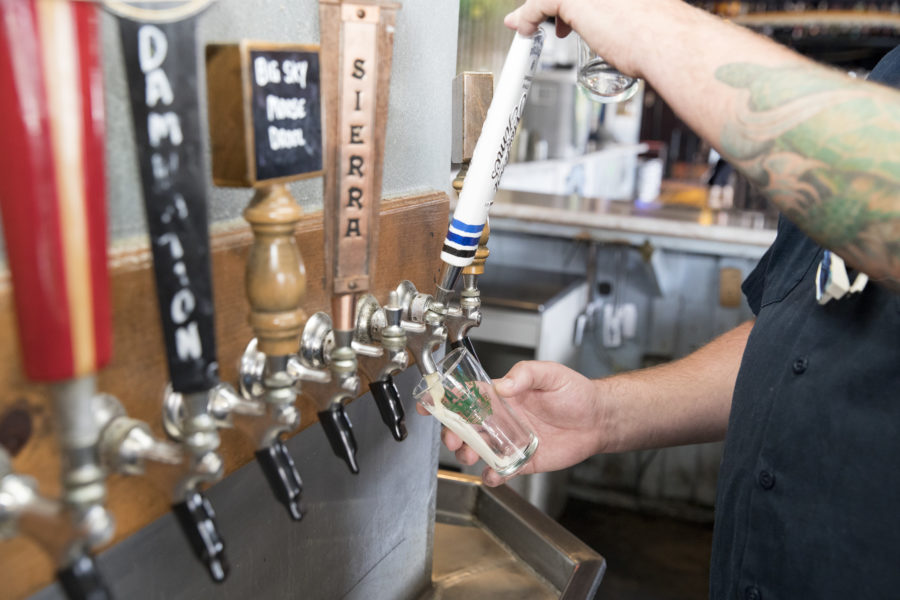 In the midst of the IPA Festival, on May 21, San Diego’s Pizza Port Brewing Company will be hosting a tap takeover. Pizza Port is a kindred spirit to Naja’s, as it was also a Godfather of the embryonic craft beer scene, offering its own brews in 1992. In collaboration with Pizza Port, Ousten and his bearded beer brother, Naja’s bartender Rich Madden, brewed a single IPA love keg.

“We added Melon, Citra and Mosaic hops,” Ousten said. “It will have a bone dry fruity flavor. It’s going to be called Temple of Dank.”

What else is on tap for Naja’s 8th Annual IPA Festival? It’s all a surprise. Naja’s reputation dictates we’ll be trying something new and all around delicious. We also get to keep the commemorative glass while supplies last (make sure not to drop them on the Strand bike ride home)

“Right now, we are at 70-plus IPAs scheduled. As in previous years, the number is most likely going to increase,” said Smail. “Last year’s IPA Festival was insane. With two days to go, we had over 100 different IPAs.”

“It would be hard-pressed to find a larger selection of IPAs under one roof in L.A. County,” said Marcello.

Keeping in the theme of dank, San Diego’s Modern Times Brewery recently awarded Naja’s its prestigious Grand Champion of Dankness award and will be hosting an event the day after IPA Festival week, , May 26, highlighting a few rare, barrel aged brews.

Naja’s Place 8th Annual IPA Festival starts May 18 at 2 p.m. and runs to May 25. Beer selection will be updated throughout the week. Follow Naja’s facebook or instagram page for updates. Modern Times Beer event is on Monday, May 26, 6 p.m. Naja’s Place is located at 150 N. International Boardwalk in Redondo Beach. ER