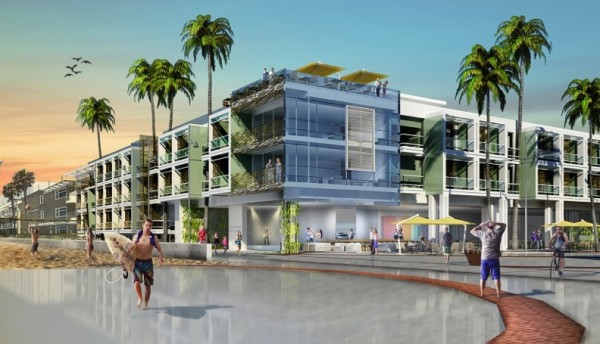 Strand & Pier, a three-story hotel with a rooftop pool and 120 rooms could be at the northwest corner of The Strand and Pier Plaza in Hermosa Beach as early as 2018. Photo Courtesy of Bolour Associates, Inc.

Permission to include parking Lot B and 100 feet of Beach Drive in the environmental impact report for the Pier and Strand Hotel was unanimously approved by the Hermosa City Council at its July 29 meeting. Lot B and Beach Drive are just east of the hotel site, at Pier Plaza and The Strand.

Councilman Pete Tucker opened the discussion by asking the developer Mark Bolour, “Where did you get the notion for a 45-foot high hotel? Voters reduced the height limit from 35 feet to 30 feet in 1991.”

Tucker also questioned the appropriateness of preparing the EIR prior to a vote on the height limit. The developer plans to call for a vote next June on raising the height limit to 45 feet.

“How can you do an EIR if you don’t know how high you can go?” Tucker asked.

Bolour said preparing an EIR based on 45-feet was preferable to waiting for the ballot measure, despite the risk of the 45-foot height limit being rejected. The EIR will take nearly one year to complete, according to a timetable Bolour submitted to the city council.

Balour is proposing a 111-room hotel with 16,000 square feet of restaurant and retail space and a rooftop pool. The first three floors would reach 35-feet. The pool, roof deck and service rooms would add another 10-feet. The parking spaces would be off site, possibly in a new parking structure on the city-owned Lot B. The hotel would require approximately 320 parking spaces, minus parking credits. The developer is asking for 130 parking place credits, which equals the demand for the site’s current businesses.

“Even some on-site parking would show good faith, that you’re trying to work with the city,” Barragan said.

The 99-room Beach House, adjacent to the site of the proposed hotel satisfied its parking requirement by contributing to the construction of the city’s 400-car downtown parking structure.

“I’m also concerned about adding parking structures on (city owned) lots A, B and C. I’m not sure that is the best use of prime coastal real estate. We could build underground parking at the Community Center tennis courts and put the courts on top,” Barragan said.

Bolour explained that on-site parking was not feasible.

“Our goal is to activate Pier Avenue, where currently there is a vacant lot [the Mermaid restaurant parking lot]. The entire ground floor will be for public uses. As a result we’ve taken the ‘back of the house’ uses underground, so that space can’t be used for parking,” Bolour said.

He noted that the water table is just eight feet below the surface.

“We’re not sure Lot B will be sufficient for our parking needs. We may be asking to utilize other city parking lots,” she added.

Both Tucker and Barragan noted that developers of other downtown properties might also want to include those same city lots in their parking plans.

Councilwoman Carolyn Petty noted that the proposed hotel would help relieve the city’s dependence on parking tickets and fees, which account for 25 percent of the city’s revenue. The hotel would generate an estimated $1.5 million annually in transient occupancy taxes, she noted.

“We are constantly talking about financial sustainability and providing bikes instead of cars,” Petty said.

“I don’t want another ‘government gone bad’ development like the Pavilion/24 Hour Fitness. We need to collaborate with the developer. If we are not flexible, we may go down a path toward something that is not good for us, which is something that’s not a hotel.”

“Let them shoot for the moon,” Establishment nightclub owner and resident David Lowe told the council. “They are the largest commercial investor in Hermosa Beach. There is no more iconic property in Hermosa Beach. If we mess this up, we’ll be paying for it for a long time.”

Resident Dency Nelson told the council, “I want something amazing there, as well, and a hotel makes sense. But we need to stay within the height limit. Do we really want another contentious ballot issue. Manhattan Beach is doing fine with a 26-foot height limit.”

Palmilla restaurant owner Ron Newman told the council, “When I lived in Manhattan Beach and they were building Metlox Plaza, all the neighbors were against it. Now I see them there all the time.

“People want a nice hotel. We need to find a way to help them get it done,” Newman said.