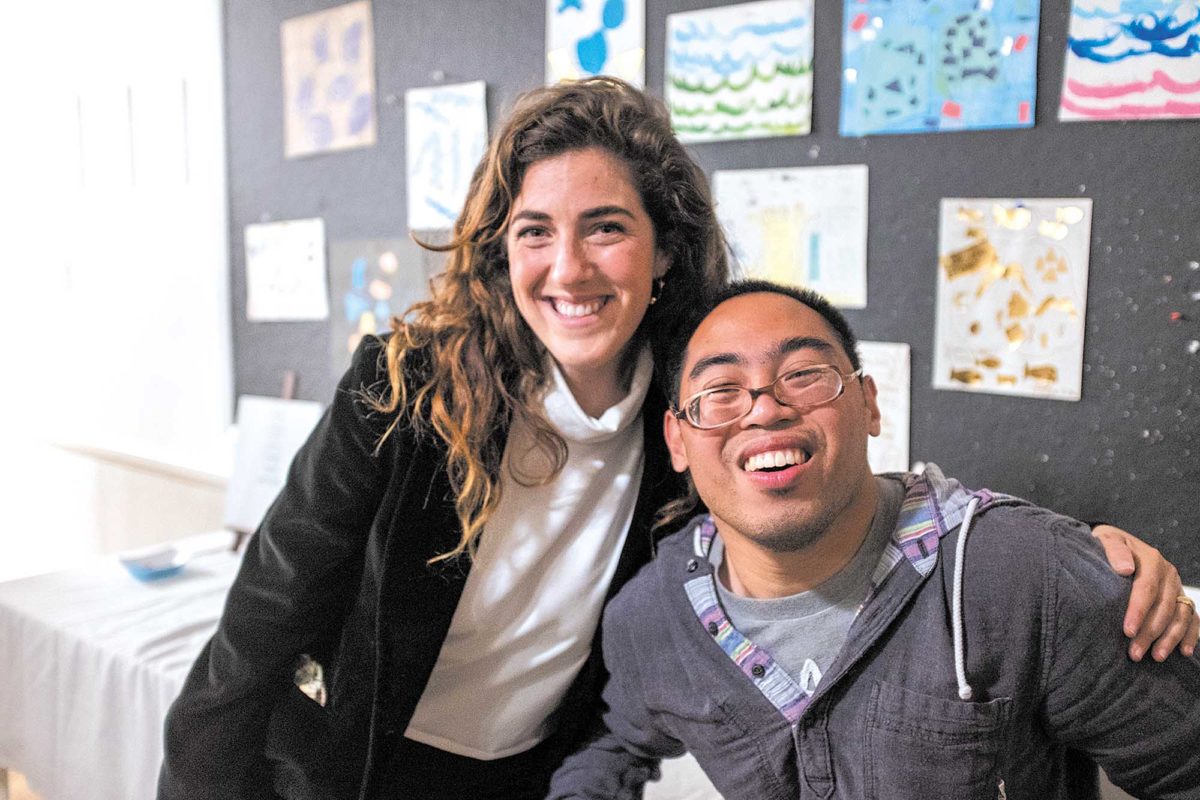 Eden Jones and ICAN client Jayco Gelotin at Friday night’s “I Can Do Art” show. Photo by Hana Jones

On Friday night, a few hundred feet off of Broadway, tucked behind a small church in South Redondo, a modest crowd had gathered to celebrate a group of men and women with developmental disabilities — many of whom were putting their art before the public for the first time.

ICAN California Abilities Network’s “I Can Do Art“ show featured pieces by 16 artists, on display and up for sale, putting a cap on three months of hard work by local artist Eden Jones and the clients of ICAN.

Jones pitched the idea of a show to ICAN as part of a capstone project for her senior thesis project at California State University Channel Islands, where she is studying Studio Art.

“It’s been a lot of fun. Really challenging — I had to have a lot of patience, but outcome…it’s been more beneficial for them than for me,” Jones said in an interview. The clients are men and women who are learning work and life skills through ICAN. The South Bay-based non-profit was born from a ministry project and became its own entity in 2012 under Executive Director Scott Elliott.

Jones’ goal was for her students to produce a real art show: a place to showcase their self-expression and techniques they learned over the course of their time with her, and make a bit of money in the process — all of the proceeds from sold artwork (and nearly every piece was sold by the night’s end) went directly to the artists.

“What I really liked seeing was the joy on their faces when they were sharing their art with the people who showed up to the art show,” Elliott said. “I was just sitting back and watching them blossom before my eyes. Even some that aren’t vocal, when someone is caring about their creation, that can spark such joy.”

Jones found something similar in watching clients develop their own styles and voices. One client’s abstract work — a woman named Jennifer — stood out for her.

“She came from an emotional state…and that’s why artists do art — because we’re putting our emotions on the canvas or the paper,” Jones said. “She brought her emotions, and it was strong and powerful; art is a healing practice, and I was happy to see that in my time there.”

Torrance resident and ICAN client AJ Fry was also among the featured artists. He had four pieces in the show: a still-life of flowers, a piece tying into a group collection of Beatles-inspired artwork, and two paintings of fantastical roller coasters. Those works (one in black and white, the other a Technicolor dreamscape) portrayed a twisting, winding series of tracks, curving in, on and around themselves — the kind of ride that would take an eternity for a rider to finish, but might never have the same twist or bend twice.

The pieces, with their intricate linework, each took Fry at least a day to complete. He’s been with ICAN for more than a year now, both in the work skills and day programs, but Fry’s been drawing roller coasters for as long as he can remember, starting with pen and paper as a child.

The door seems to be open for Jones to return as well — Elliott had nothing but praise for the artist, likening her program to a “three-month-long job interview.” Her initial class of art students were overjoyed with her as well, shouting “we love you, Eden!” after she thanked the gallery’s many visitors.