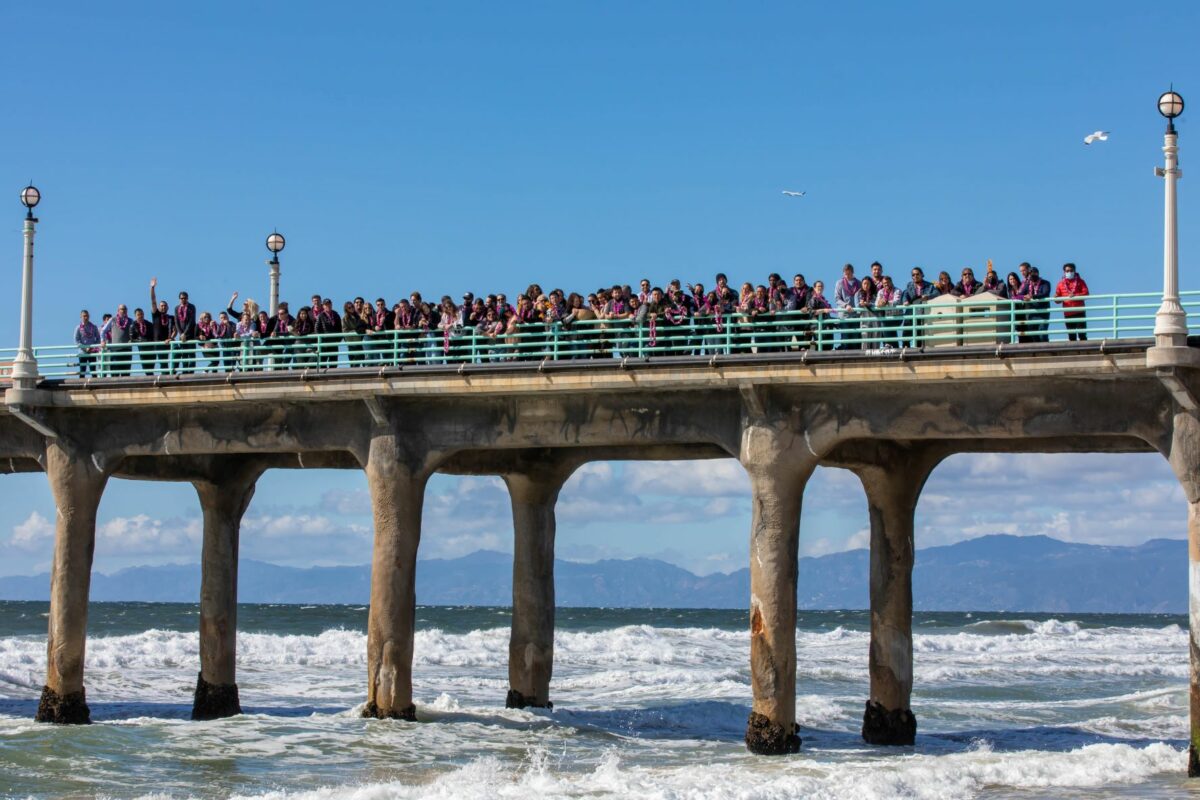 The Strand House staff gathered at the Manhattan Beach Pier to remember Michael Morrisette on Tuesday. Photo by J.P. Cordero

The Strand House had only been opene for about a year, and it was something new and ambitious both for restaurateur Mike Zislis and for Manhattan Beach. It was 2012 and neither Zislis nor the city was yet known as a destination for fine dining.

All Zislis knew is he wanted the best of the best. He’d hired the best chefs, and appointed the kitchen with state of the art equipment, all with the intent to match the peerless location of the new restaurant, perched right above the Manhattan Beach pier.

But something was missing. Zislis was out for dinner in L.A. one night and met a man well-known in the higher realms of the region’s fine dining world. He asked Michael Morrisette to come and take a look at his restaurant and share his thoughts on it. Morrisette, who’d worked at Savore, La Cachette, Citrin, and helped open famed four-star restaurant Mélisse in Los Angeles, came to The Strand House. He ate, observed, and wrote a report on the restaurant for Zislis.

Zislis was blown away. The report talked about “soul and hospitality” and its author said he’d like to help bring those qualities to The Strand House.

“I thought it was such a beautiful report,” Zislis said. “Not only did I hire him, I made him a partner.”

Morrisette delivered on his promise. He helped not only elevate The Strand House’s hospitality but touched the souls of countless diners and coworkers over the past decade. Morrisette passed away last week of complications related to COVID-19. He was 61.

“For those of you fortunate enough to know Michael, you knew that he was the kindest person you could ever meet. He had a special way about him that made everyone he came in contact with feel special and taken care of,” Zislis said in a statement released on behalf of the Zislis Group the day after Morrisette’s passing. “Heaven is a better place today because of him.”

Morrissette was a star in the restaurant world, but the gifts he brought to bear at work were, if anything, even more strongly displayed in his life beyond work. He began working in his family’s restaurant in Springfield, Oregon at the age of six, and grew up as a talented baseball,, and basketball player, and musician. As husband to Prissi Cohen and the father of their daughter, Tillie, Morrisette may have found his ultimate calling.

His friend Mark Shoolery wrote a tribute on Facebook in which he noted that Morrissette’s ability to make people feel special touched everything he did.

“What an exemplary life you led and what a demonstration of the true meaning of hospitality you were,” Shoolery wrote. “You were the light and love of my childhood friend, Prissi Cohen, with whom you shared so many beautiful years. Father to Tillie who so beautifully remembered you in your memorial today. I will never forget the night I brought some VIP studio executives to Melisse  in Santa Monica for dinner. You made the entire evening a sparkling, unforgettable occasion with attention to every detail… absolutely nothing went unnoticed. But beyond that, there was an ease, a gracefulness, a generosity of spirit, the feeling that you were my best friend  there to make sure everyone had the perfect time. Your warmth and authenticity permeated every encounter.”

Cohen wrote, in response, that the way Morrisette helped people experience such beautiful nights was akin to how he made her feel every day of their life together.

“He made my life as beautiful with the way he attended to me every day for the last 28 years,” she wrote. “How he was able to give so much and still have so much left inside I’ll never know. He was a beautiful man, strong and courageous while gentle and vulnerable. How rare and precious.”

In an interview, Zislis described Morrisette as an extremely caring father figure and teacher to his employees. He said that when he opened The Strand House, he was already experienced at restaurants —  he’d opened BrewCo, across the street, at 22, and Rock ‘N Fish after that —  but wasn’t sure he could pull off such an ambitious undertaking.

“I wasn’t confident that I could make it work,” he said. “I knew what I wanted it to be, but I didn’t know how to execute. And that’s where Michael came into play. He could take you to that next level. And he did. He also did training for my other companies. His nickname was the king of hospitality.”

One time, Zislis recalled, a shoeless guest arrived from the nearby beach. The restaurant has a no shoes, no shirt, no service policy, but Morrisette couldn’t bear to turn someone away. He had an idea —  the Shade Hotel, also part of the Zislis Group, was only blocks away.

“Michael called Shade and told them to bring down some slippers and was able to get the guy in the restaurant,” Zislis said. “Michael was Mr. Hospitality, and if something didn’t go right —  in the restaurant business, not everything goes right every day —  he would chase the guy down the street. He would never want to lose them, so if something went wrong, a service issue or whatever, he runs them down and begs them to come back. And he wins them for life.”

For Morrisette, hospitality wasn’t just an industry word, but a way of life. Jenna Record, vice president of marketing for the Zislis Group, said that he had a way of making every person in the restaurant feel special.

“Everything he did was from the heart and through hospitality, and not just for the guests that walked through the door, but his entire team and staff,” she said. “Yesterday, we had a staff reflection, and all the stories were just exactly the same. How, no matter what —  it could be a Friday night, and if Michael knew something was up, he’d pull you aside and check on you, ‘Is everything okay?’ Every person who walked through the door, every employee, every dishwasher —  every person was treated like family and royalty. Michael made every experience special….Even in the way he treated hospital staff the last six months of his life. Micheal was remarkable.”

Zislis said this even applied to the employee interview process.

“He’s interviewing somebody and the person mentions something else, about family, and Michael diverts the next 40 minutes to talk about family and issues like that,” Zislis said. “One of our servers was talking about losing his brother, and Michael didn’t talk about work again, just the family environment, and he hires the guy. He was always concerned about people’s well-being.”

The Strand House staff gathered Tuesday and walked to the pier, together, to remember Morrisette. His tradition of having the time of sunset on every menu, every day, will be continued. It was indicative of the attention and love for the details of life he brought to every table and every person he encountered.

“He was just such a master of the craft,” Record said. “Everything he did, from his napkin folds to his table settings to how he graced the presence of the dining room, it was just incredible watching. Everything he did was through the heart and soul.  He will  just be extremely, extremely missed.” ER