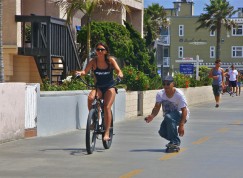 Rick Barraza is a renaissance man – an energy healer, a jewelry designer, a garment-company honcho, and now the inventor of Gripski, a lightweight, retractable four-foot tether that a skater can use to get a tow from a bicycle.

Barraza, who runs the tether company with his brother Tim, has been hawking his invention ideas on Gripski.com and in impromptu sales pitches with people on wheels as they roll by on the Strand. He said he’s also placed the Gripski in Pier Surf, ET Surf and a surf shop in Venice, and he had a belated launch party last week at Sharkeez.

Barraza was involved in a skate shop in Tulsa, Oklahoma when he came out west with Tim and another brother, Steve, to join the company that would become LA Gear. Steve would helm LA Gear’s garment operation, and in 2008 Barraza would go on leave to design and sell his Gripski.

He dreamed up the retractable tether a year before, as he sat on a porch on the Hermosa Strand and watched the world roll by.

The result was a tether made of Spectra, a light, strong polyethylene fiber, attached to a lightweight, easy-release handle held by the skateboarder. There are two models, one that stays attached to the bike, and another that the skater would keep, which has a clip that can be attached to the bike at the blink of an eye.

The entire tiny thing is encased in sleek black metal with a “stealth look” aimed to please the aesthetic senses.

Gripskis can be purchased at the website for $39.95 or less.

Although the tether is designed for fluid motion and an easy grip-release, Gripski.com is full of safety disclaimers advising skaters to wear helmets and pads and to skate within their capabilities.

The site advises skaters and bike riders to “always be aware of all city and municipal laws restricting the use of such equipment on public streets and property. Gripski is only intending this product be used in areas designated for bicycle and skate activities and to be used only in a safe environment, never skate close to heavily trafficked roadways.”

Hermosa Beach Police Chief Greg Savelli said “There is no specific law about towing from bicycles, but it could be considered reckless driving.” He added, “It is not recommended.”

“Gripski is primarily intended for recreational use on bicycle paths, and skate paths with surfaces designed for skating,” Barraza says on the website. “This is an amazing device for casual skating allowing you to glide effortlessly for long distances behind a conventional bicycle, enabling you to improve your skills without having to propel yourself.”

He also called the tether an outstanding way to cross train for ice skating, hockey and snowboarding, and predicted that it might find its way into the extreme sports arena.

He said he towed an ice skater from Palos Verdes to Venice, and she was elated that she was able to train for competition by holding difficult poses for extended periods. ER