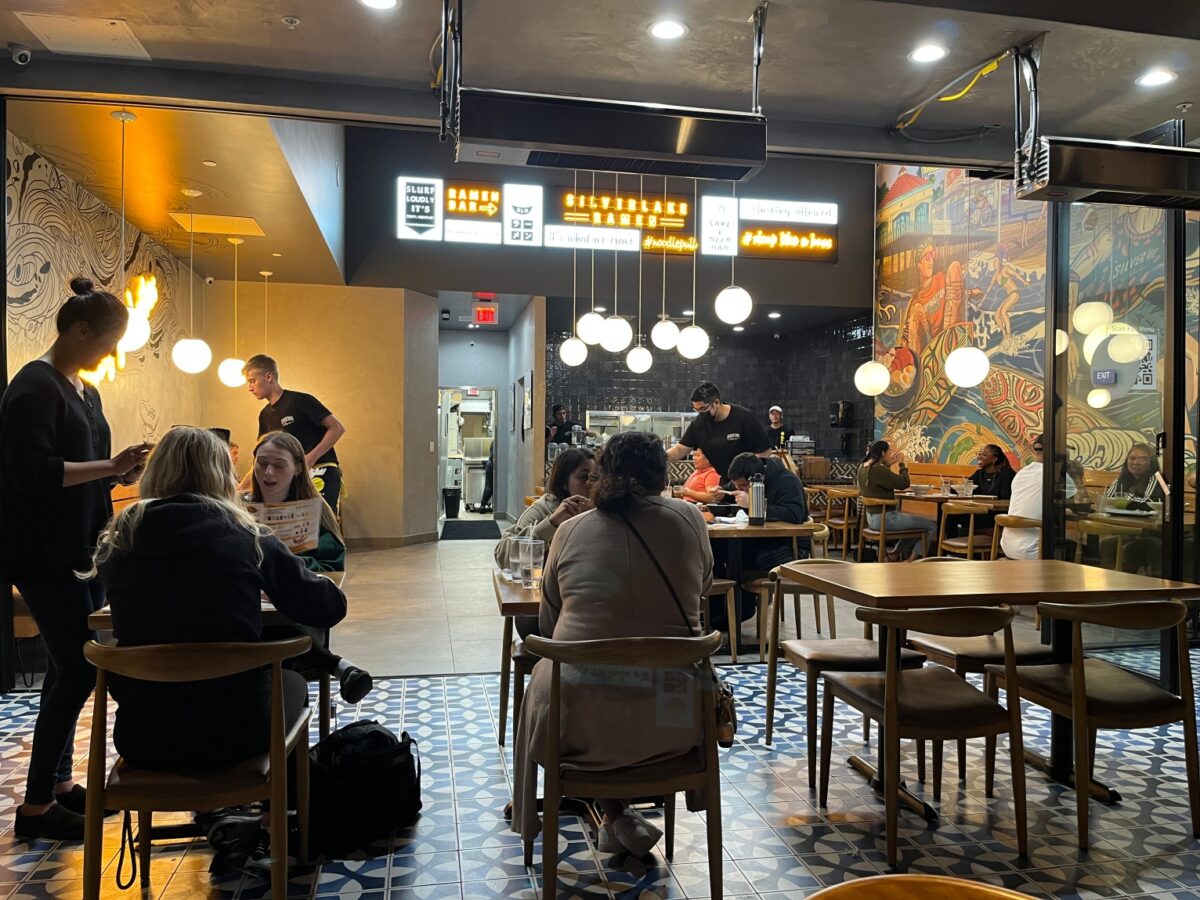 When the dark and moisture-heavy clouds of winter gather, soup is on my mind. Often I make it at home, using homemade stocks cooked down from bones and vegetable ends. But since dining out is one of the great joys of my life, I go out for it too. I don’t like driving in the rain, but on some soggy nights the trip to Torrance for Korean tofu stew is worth it, and a little local jaunt to El Segundo for hot and sour or to the nearby Thai place for a bowl of tom yum is a no-brainer.

My wife shares my appreciation, and one soup is her favorite above all others – a bowl of ramen. We’ve tried it at most Japanese restaurants in the South Bay, so when a specialist opened in the Manhattan Village Mall, it was inevitable that we’d be there soon. Silver Lake Ramen started in business a decade ago, and now has locations as far away as the east coast. That kind of success deserved investigation.

Our first visit was on a cold evening. There was a line out the door, so lots of other people had the same idea we did. We got on the waitlist and admired the cheerful environment, a sleek modern room dominated by a whimsical mural that scrambles the Manhattan Beach pier, surfers sporting Polynesian boards and tattoos, and Japanese mid-century poster art. I don’t know the artist, but they created something I could gaze at for a long time. Neon signage reminiscent of downtown Tokyo completed the room. Whoever designed the place deserves applause.

That Japanese hyper modern decor is mirrored by the menu, which entwines California ideas with the kind of food Japanese are eating now, both in their ancestral country and around the world. Ramen is there, of course, but alongside the traditional variants are items that would make a purist blanch. There could hardly be an item more Californasian than garlic truffle ramen, unless it’s the “Shoyu on fire,” which includes jalapeno, cilantro, corn, and lime. Another item, the peculiarly named “Cajun mazemen,”is obviously intended to evoke Louisiana, but even a glance at the picture on the menu will let you know that it’s a very free interpretation.

We tried four of their starters, chicken karaage, broccolini with creamy sesame sauce, spicy chicken bun, and the mushrooms sauteed in butter. The mix of eirigi, shiitake, and enoki mushrooms were lightly cooked so the texture was perfect, but I found them slightly over-salted. The broccolini were better thanks to a delicate sesame sauce that seemed to have a little sweetness from miso. I’d recommend that as a starter because it makes a good flavor, and texture contrast to the noodle soups you’ll probably be having as a main course.

The chicken karaage was fried in the standard manner, but served with spicy aioli instead of the usual mild mayo sauce, or miso-mirin combination. Crisp fried chicken is always a hit, and this was well executed. The spicy chicken bun, a riff on the traditional way of serving Peking duck, was less successful. I had braced myself for an explosion of flavor from the ghost pepper kimchi, but there was just a hint of the fierce heat that pepper is known for, and I didn’t think it was a particularly good pairing with the sweet teriyaki sauce. I’d call it a near miss when it comes to everything working together, but I’m glad I tried it. 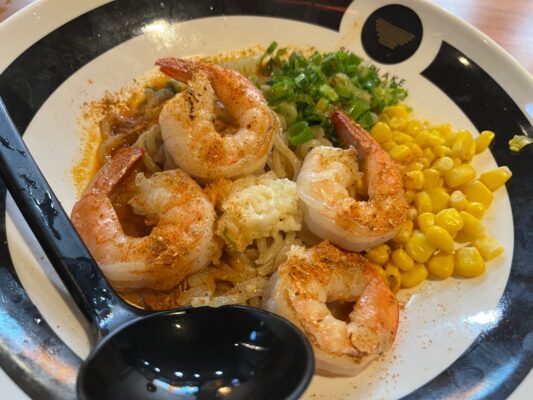 The Cajun Mazemen ramen is an original dish with inspiration from both Japan and Louisiana. Photo by Richard Foss.

The online menu shows sushi rolls, but when I tried ordering them apologies were offered, because they’re not available yet. The online menu doesn’t include that odd Cajun Mazemen ramen, suggesting that it’s either a new item or one on the way out. The noodles are in a chicken stock mixed with a creole sauce, topped with corn, green onions, mild pork sausage, shrimp, and a lump of lightly cooked, chopped garlic that is quite a surprise if you just try it rather than mix it in. The shrimp had been cooked with very little seasoning, and then tossed in dry Cajun spices, an unusual choice. The menu suggests you squeeze lime over it and mix it well, and that’s the way to eat this. It’s a diverting idea that is fairly successful, and not quite like anything else I‘ve had.

We also tried the veggie ramen, classic ramen, and a pork bowl over rice just for variety. Classic tonkotsu ramen stock is boiled down from pork bones to rich thickness, and when I saw a description that said “creamy ramen stock,” I nodded. Bone marrow stock and milk are both animal products, and that’s the effect, sure. Then I noticed that the description says, “Contains dairy.” The Japanese are notoriously not big dairy consumers, so it’s bizarre to call it classic, but it was a rich base for a porky ramen. The other ingredients were bean sprouts, seaweed, egg, and green onions, which are traditional, spinach, which is reasonably close, and black garlic oil which is emphatically not but adds a nice flavor. It’s a classic in style even if the details are different, and a fine warmer on a cool evening. 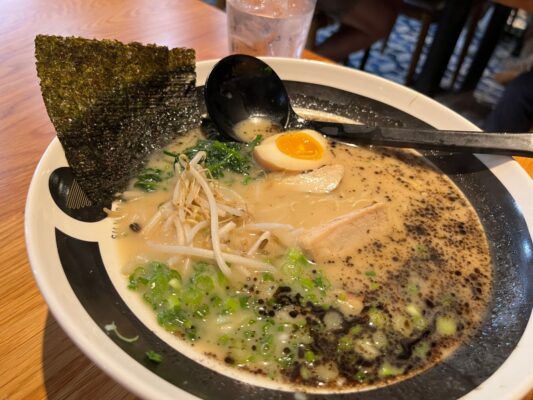 My wife liked the veggie ramen even more, though I found the miso stock to be a bit salty. That’s taking into consideration that miso often has salt – this was still a bit high, but if you don’t mind that, this is a very good noodle and vegetable soup. They use the proper firm tofu so it doesn’t fall to pieces, a detail that some other places miss. I was less happy with the pork bowl because the only vegetables were green onion, red onion, and a huge fried jalapeno. A bit of that spinach would have added texture and color and made it more interesting, and if the jalapeno is going to be included at all, it should have been cut smaller and placed on the side so you didn’t have to eat it like a popsicle.

Beer, wine, and sake are served at acceptable prices. Though the list isn’t huge, it covers the bases. You can have a bowl of ramen and a beverage here for just over 20 bucks, and splitting an appetizer will get you out the door at about 30 bucks each. There are a lot of ramen places in the South Bay and while this isn’t my favorite, they do a good job in a highly accessible space at a reasonable price. If that’s what you’re looking for, here’s where you go.