The 56-year-old produces about three technology-related videos a week for USA Today from his Manhattan Beach garage-transformed-studio.

Blown up pictures of brides hang on the garage walls – last year, he booked a personal record of 50 weddings and bar mitzvahs – next to a blue curtain that often serves as a background for video interviews.

An iPad, iPhone and a point and shoot camera are set up at three angles, ready to record. In his new book, Video Nation, Graham informs readers how to use these ubiquitous pieces of technology to produce professional videos.

“Everybody has a point and shoot, a lot of people have iPhones…everybody has a video device in possession,” Graham said. “The trick is figuring out how to make them look professional.” 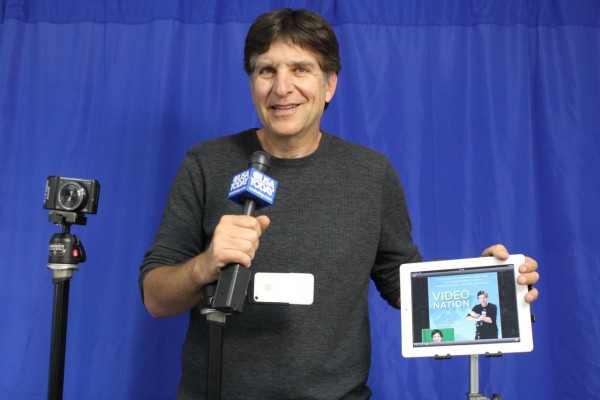 On July 26, {pages} a bookstore in Manhattan Beach will host Graham’s book party, where he’ll sign books, answer technology questions and give tips on how to improve your video skills.

The idea spawned from a conversation with his friend Richard Goldstein. “He called me one day, he said, ‘I want to be like you. What kind of camera should I get? What about lighting? What about sound?’” Graham recalled.

Graham realized that these questions are probably equally ubiquitous among would-be videographers as iPhones and point-and-shoot cameras. “I thought I had something to say,” Graham said.

Graham took Goldstein to Home Depot for some inexpensive lighting equipment, and gave him a crash course in shooting B-roll, positioning the camera in different angles and editing in iMovie. “I came out with some terrific YouTube videos,” Goldstein said.

“Jeff’s a very economical guy,” Goldstein continued, adding that his instructional approach is centered on affordability and accessibility. Goldstein, a caricature artist, now runs sendacardtoon.com, where he records himself drawing caricatures, speeds them up, and sends the video and the drawing to his clients.

Video supplements to Graham’s book are available online at peachpit.com/videonation. Featured in one of the videos is Reza Hosseini, Graham’s dry cleaner. “If I knew I had that much charisma, I would’ve changed my career,” Hosseini joked. “If I had a website, I would definitely use (Graham’s) advice and do what he says.”

The native New Yorker has produced more than 300 videos from his Manhattan Beach home, the most-viewed of which was his review of the first iPad. The three-minute video boasts more than three million views. Graham has produced four of the ten most viewed USA Today videos, all Apple-related.

Graham moved to Los Angeles at 23, where he found a job as a stringer for a penny a word at the Glendale News Press. He later jumped from The Hollywood Reporter to Entertainment Tonight until landing a freelance gig covering television and movies for USA Today in 1984. He’s since turned it into a full-time job, and since 2000, Graham’s been covering technology.

Seven years into the tech beat, he had an idea. He and a coworker would create a podcast about tech gadgets.

“The mistakes do not go away,” he said.

In January, between setting up his gear and conducting an interview with a big media CEO in a Las Vegas hotel suite, he paused for a bathroom break. Upon returning, his assistant hit record and Graham began the interview.

While reviewing the footage later, Graham noticed a huge mistake. He’d forgotten to close the bathroom door, and in the shot, a big white toilet bowl sat next to his subject’s head.

“That was my favorite mistake,” Graham said. “All I could see was the toilet bowl.”

After the interview, Graham’s assistant whispered to him, “No sound.” The audio didn’t record.

“I said, ‘What do you mean no sound?’” Graham said. The two discovered a technological malfunction.

His mother, Judy Graham, has embraced Jefferson’s video instruction. She hosts a knitting program on YouTube which boast six million views. With her earnings, she’s able to cover her real estate taxes every year, Jefferson said.

“Anyone can be a star,” Jefferson said.