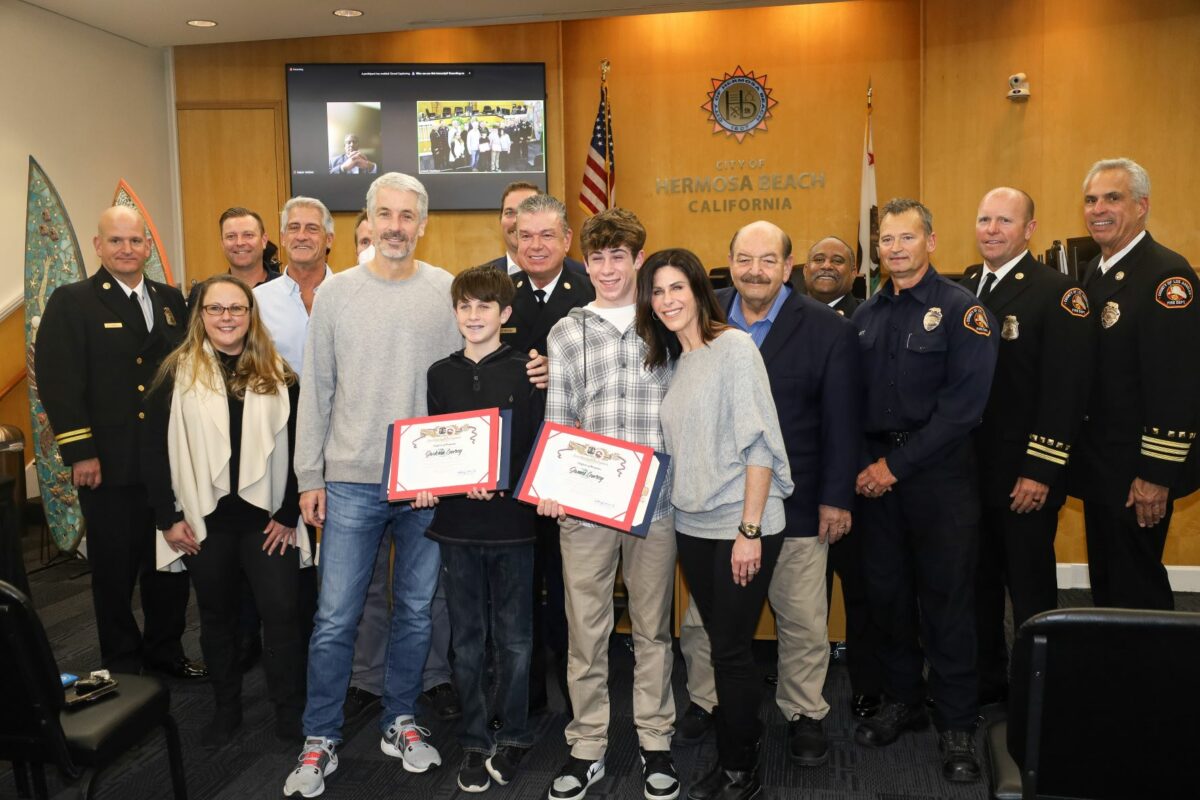 Jack and James Lowrey hold Los Angeles County Fire Department Certificates of Recognition, presented to them for saving their father Jim’s life after he suffered cardiac arrest. The sons are flanked by their dad, mother Nicola, Los Angeles County firefighters, and Hermosa Beach council members. The presentation was at the Tuesday, January 10 Hermosa council meeting. Photo by Kevin Cody

Jim Lowrey lay on the floor of his Hermosa Beach home for 27 minutes without a heartbeat last September.

During the first four  minutes, his son James, 15, performed CPR. Absent a heart beat, or CPR, the brain is starved of oxygen. James learned CPR in the Los Angeles County Junior Lifeguards program.

Then Lowrey’s wife, Nicola, a physician’s assistant, took over. She performed CPR on her husband for approximately three more minutes, until Los Angeles County Fire Department paramedics arrived. Lowrey’s youngest son, Jack, 13, had called 911 upon seeing his dad collapse on the stairs leading to their home’s second story. Jack had also learned CPR in Junior Lifeguards.

Over the next 20 minutes, the paramedic injected Lowrey three times with Adenocor, and shocked him three times with a defibrillator. Still Lowrey’s heart didn’t beat. While the firefighters worked on her husband, Nicola joined her sons in the playroom where they had retreated. She hugged them, and prayed out loud.

“After the third shock failed, I didn’t think Jim would come back,” she said during an interview this week. Nicola worked in hospital emergency rooms for 15 years.

The paramedics applied a fourth shock.

“We’ve got a rhythm,” a firefighter shouted.

Moments later an ambulance arrived to transport Lowrey to Little Company of Mary Medical Center. He had not regained consciousness. But hopelessness had turned to hopefulness.

Lowrey collapsed after arriving home with his son James, who plays water polo, from a Redondo High water polo game a friend was playing in.

Jack shouted, “Dad” when his dad collapsed. James raced in from another room and picked up his dad’s phone, which was next to him. His mom was on the phone.

Nicola had been talking to her husband while jogging on the Greenbelt, a few blocks from the family’s home.

“I told James to check his dad’s pulse. He couldn’t find a pulse. I asked if he was still breathing. He said he was, but irregularly. I told him, ‘Do compressions,’” Nicola said.

Her husband was gray when she reached the house and took over CPR from her oldest son. 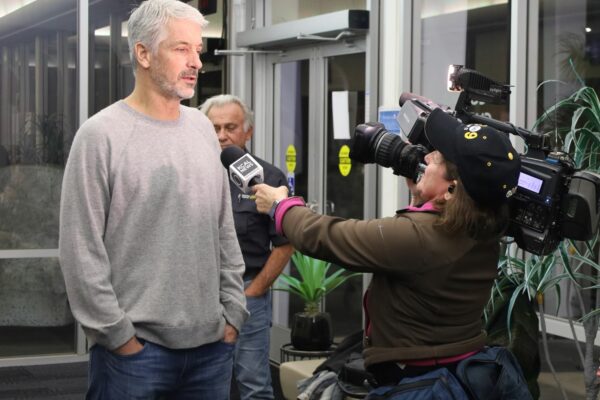 Jim Lowrey recounts to KCal News, outside the Hermosa Council chambers, being saved by his family after suffering cardiac arrest. Photo by Kevin Cody

Upon arrival at Providence Little Company, the emergency room medical team intubated Lowrey and lowered his body temperature to 89 degrees to reduce the likelihood of brain damage. He tested positive for COVID-19. Though he had recovered from COVID-19, contracted several months earlier in Puerto Rico, hospital protocol prohibited him from having visitors.

“Not being able to be with him, to advocate for him was hard,” Nicola said.

On the second day, Lowrey was allowed to have visitors. He was able to say the names of his wife and children. But his short term memory was gone.

“Every five minutes, he’d ask why he was in the hospital. It was like a bad movie,” Nicole recalled.

Lowrey said he has no recollection of anything that happened between the Tuesday afternoon, when he suffered cardiac arrest, and the following Sunday, when he returned home. On Monday, he was back at work.

“I wanted to feel useful, and I needed to run payroll,” he said. “I remember looking at the blank checks, and thinking, ‘Okay, I can do this.’”

Otherwise, the only lasting effects of his heart attack have been positive ones, resulting from the family’s efforts to encourage people to learn CPR.

Nicola posted the family’s story on her Instagram account. The story went viral after the American Heart Association reposted the story on its social media platforms.

“I would not have recovered without my son James getting oxygen to my brain in those first few minutes,” Lowrey  said. Over 300,000 people a year die following cardiac arrest. ER