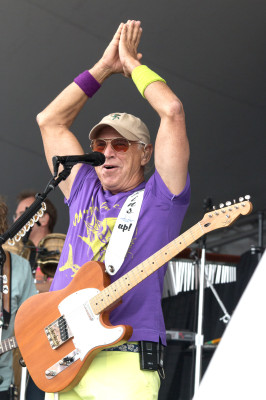 Jimmy Buffett gives his signature greeting to fans at the opening of his Hermosa Beach concert. Photo

Parrotheads and passersby, whom police estimated exceeded 12,000, raised their arms over their heads like fins and sang, screamed and danced along to Jimmy Buffett as he played his anthem “Fins,” rewriting the lyrics to honor Hermosa Beach. 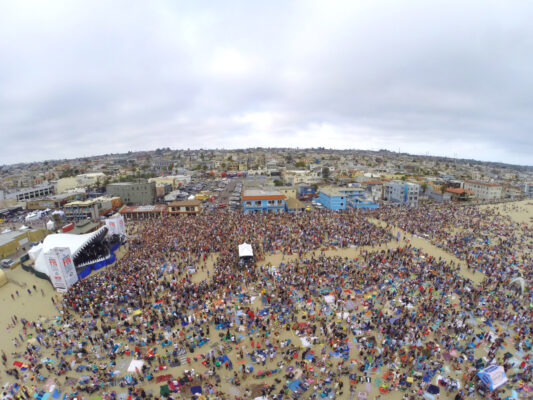 Rumors began Friday morning of Buffett performing a free concert on the sand in Hermosa Beach. For once, the rumors proved true. The legendary Margaritaville mogul appeared on a stage that resembled a shark’s mouth, barefoot and wearing canary yellow shorts, at 6 p.m. and performed a solid, one hour concert.

“The Discovery Channel said, ‘Hey, Jimmy, do you want to play Shark Week?” Buffett told the crowd. “And I said, ‘Duh!’” 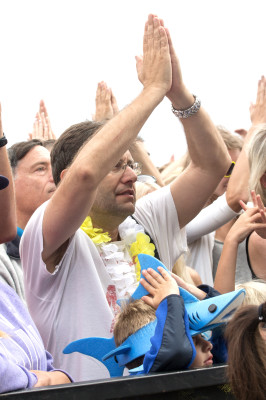 Buffett was an obvious choice to help Discovery Channel promote Shark Week because of his 1979 hit “Fins.” Sharks and shark fins figure prominently in parrothead clothing and accessories, though the song refers to male land sharks..

“We tried to keep Buffett a secret because we wanted the loyal beach crowd to benefit from the free show,” said Laurie Goldberg, Senior Vice President of Public Relations at Discovery Communications.

But secret leaked Friday morning and was reported on KLOS radio, as well as on parrothead websites, Facebook and Twitter.

Robert Winthrop of Woodland Hills brought his six year old twins Tyler and Jessica to the show early so they could get close to the stage. It was the kids’ first Buffett concert and Winthrop’s 55th.

Joe and Ricki Russell, a young couple from Marina Del Rey, also made it to the front of the stage. Joe has been to 35 Buffett shows and his wife 11. Joe’s wedding band has “Fins up” engraved on the inside.

The Los Angeles Parrot Head Club was also represented. The club is 15 years old and boasts 175 members. They hold a monthly meeting called a “flocking” and it just so happened to be scheduled for Saturday. After hearing rumors of the Hermosa show the group cancelled their meeting to attend the concert.

“I’ve been to 20 shows,” Kris Salter of Canyon Country said. “I am so excited right now.”

Buffett and his Margaritaville Coral Reefer Band took to the stage just after 6 p.m. and ignited an already spirited crowd.

“Whoa, land sharks,” Buffett said, holding his hands together over his head like a shark fin. His fans returned the greeting. “Welcome to Fin Fest. It’s great to be in the neighborhood.” 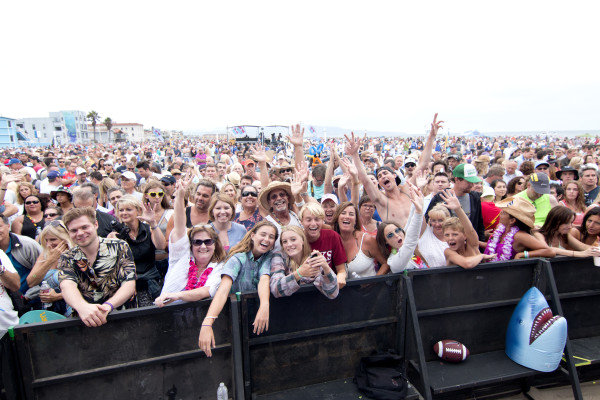 The 67-year old musician seemed no less animated than in his younger days. He jumped, danced and cracked jokes throughout a 12 song set that included “Changes in Latitudes, Changes in Attitudes,” “Cheeseburger in Paradise,” “Fins” and, of course, “Margaritaville.” 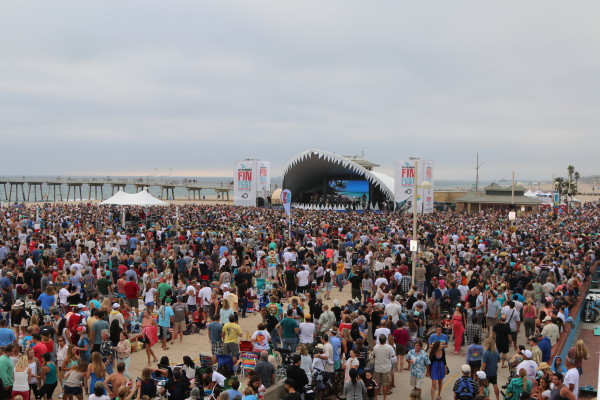 Hermosa Beach Police Officer Dave Jones said he knew of only one incident, involving a drunk person who had to be taken off the beach. “And that was because he was falling on people,” Officer Jones said.

“Everyone looks really happy,” Goldberg said during the performance. “And no one is paying for anything unless they want to buy a tee shirt.”

The Buffett concert was part of a weekend-long FinFest on Pier Plaza put on by The Discovery Channel to promote its Shark Week programing, which runs August 10 through August 15. 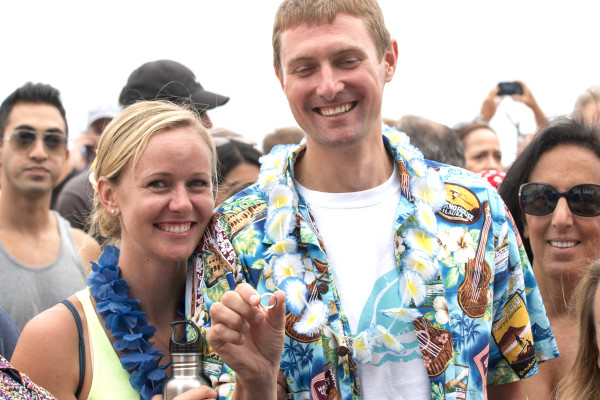 Joe and Ricki Russell,of Marina Del Rey. Joe’s wedding band has “Fins up” engraved on the inside.

“The concept of the festival is to help people understand sharks better,” Goldberg said.

The festival included Redondo SEA lab touch tanks where kids got the chance to pet a shark; a giant robot named Sharkzilla who munched objects lifeguard chairs and jet skis every hour; and a booth where kids could get their faces painted and their hair colored and styled in a fin-like faux hawk. 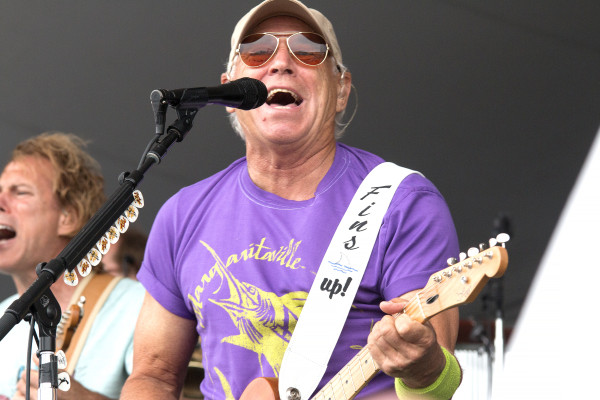 FinFest was produced by Discovery Channel and Highline Events, in partnership with the City of Hermosa Beach and Allen Sanford of Saint Rocke, who produces the Sunday evening Concerts on the Beach series.

Sunday’s music lineup begans at noon with Commons Sense, followed by the Matt Costa Band at 2 p.m., the John Butler Trio at 5:30 p.m.and a screening on the sand of the opening of Shark Week. ER