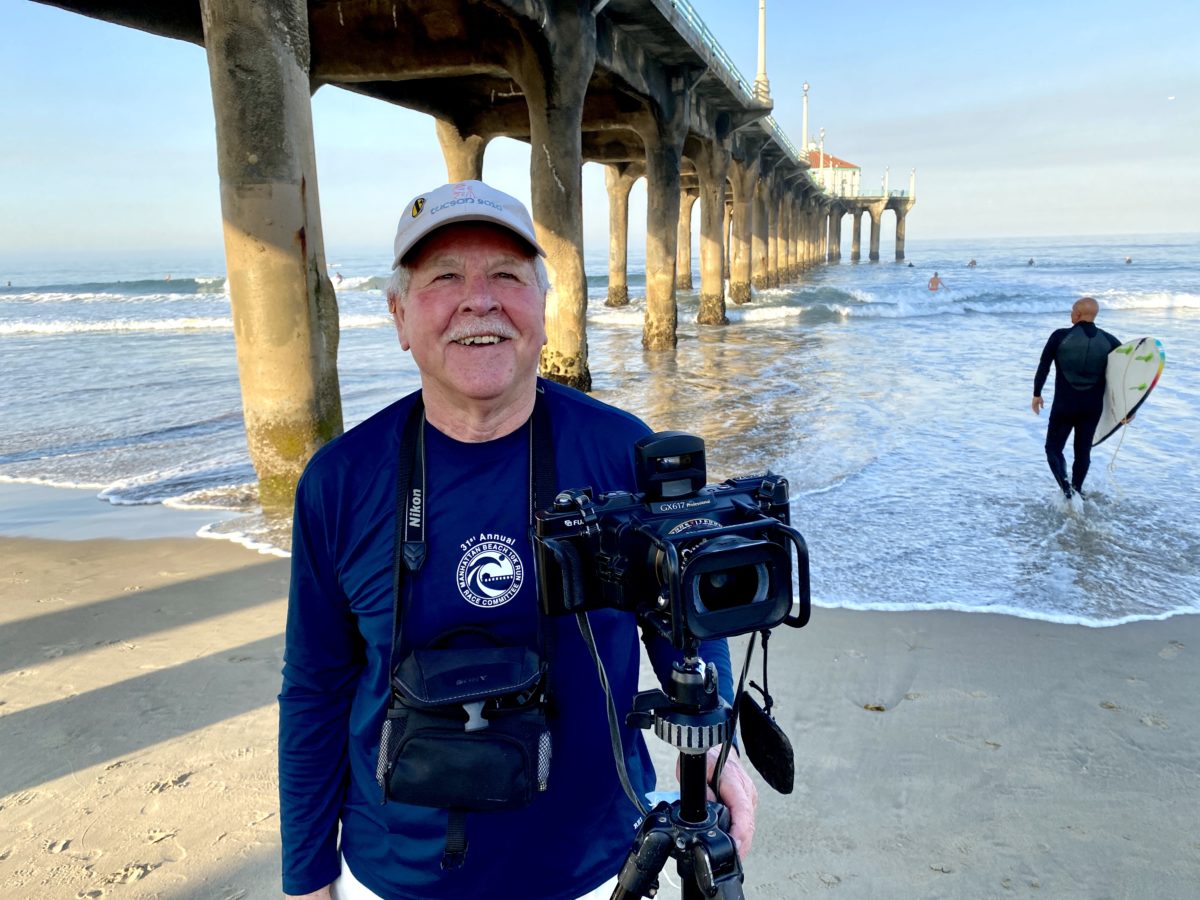 Photographer John Post poses by the Manhattan Beach Pier, as a surfer enters the water. Photo

Spend some time with photographer John Post, start talking about the Manhattan Beach Pier, and watch him get animated.

“A famous artist once said he never needs more than an acre of land in a lifetime to never run out of good subject matter and good art,” Post says. “I thought about that for years, and then thought, I’m going to make this little area of Manhattan Beach and South my acre of land.”

As anyone who has attended the Manhattan Beach Hometown Fair, where Post’s images have been displayed  for years, or walked around town, where his photos have hung for years, (everywhere from the Kettle to “thousands of homes and medical offices”), it’s fair to say Post’s decision to use 90266 as his muse has been a success. 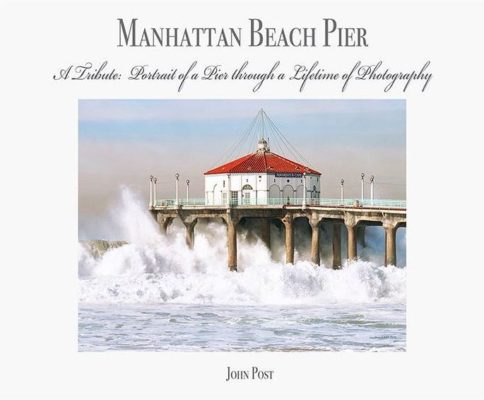 Post, 73, has been photographing the Manhattan Beach Pier and the neighboring Beach Cities cities for 50 years. He’s celebrating his golden jubilee and with a book timed to this year’s 100th anniversary of the Pier. “Manhattan Beach Pier — Portrait of a Pier Through a Lifetime of Photography’” is set for a November release, and will include as many as 150 photos of the Pier through the years.

“I first shot the Pier in 1969,” says Post, who runs his downtown Manhattan Beach John Post Gallery at 808 Manhattan Avenue. “The Pier has been the backbone of the community and the story of my photography.”

Manhattan Beach mayor Richard Montgomery says he first met Post in 1987 when he moved to the city, at the Hometown Fair, where Post has been a fixture (along with the Fiestas in Hermosa Beach.) “He was friendly and I appreciated learning the history of Manhattan Beach through his lens.”

Montgomery now has eight Post prints on his walls, and two of Post’s photo book collections. “John is a craftsman who captures our beach life and I consider myself lucky to know him,” he adds.

Georgi Gastonguay is a longtime fan who bought a previous Post book,

“Our South Bay Coastline,” and has Post images on her wall “to remind us of `that sunset’ or `that day’ held in our hearts,” she noted on Facebook. “John Post photographs capture and epitomize the South Bay coastline and the beauty with which we have been blessed,” she says.

Former Manhattan Beach mayor Wayne Powell owns two Post posters and wrote the forward to Post’s last book, for the Manhattan Beach Centennial, which he calls “an honor and highlight of my first term as Mayor.”

When Post began photographing the Pier it was a place for fishing enthusiasts to pull out their rods and catch, but over the years it’s become accepted as an icon in its own right, unlike Redondo and Hermosa piers, which he says are more “utilitarian.”

“The Manhattan Beach Pier is the center of the community,” he says. “It has a visual balance that a lot of other piers don’t have.”

Does he ever get tired of shooting it?

“No, because every time I look at it, it’s different,” he says.

Manhattan Beach on a Sunday morning, by John Post

The book, he says, “is not a picture book of pretty sunsets, although there’s plenty of them in there, but large panoramas, black and whites from the 1970s, all sorts of things.”

Unlike many photographers, who drape their pier shots in dramatic sunsets, Post is not all about the last hour of the day. “I don’t just do sunsets or sunrises,” he says. “I take the picture when it’s the best time to photograph, and that can be morning, afternoon or evening.”

When we met Post on a recent Sunday morning, he was intrigued with the Pier pilings, which he photographed with his vintage Fuji film GX617 panoramic camera. “I usually have an eight foot ladder with me,” he says, but on the day of the record 90 degree beach heats, he left it at home.

Some of his best work was shot on the Fuji, from high above. One year, he did a group shot of locals with the camera from a helicopter.

Other notable panoramas from his Fuji, on display at the gallery: both the Pier and Manhattan Beach scenes, as well as Hermosa Beach and Pier Plaza, the Redondo Beach Pier, Palos Verdes and Point Vincente and downtown Los Angeles.

He also shoots with a tiny Nikon point and shoot digital for many of his beach scenes as well. “That’s my go-to camera now,” he says.

One thing he’s noticed over the years: the beach and Pier have come to be appreciated. “We’re more protective of our environments now.”

Kevin Post, John’s older brother and a former middle school English teacher in Manhattan Beach recalls watching John struggle financially when he was starting out. “I suggested he get a part-time job, so he’d at least have some money coming in.” John refused, saying he wanted to “stay hungry” and follow his passion. “I was wrong, he was right, and I’m thrilled he stuck with it.”

John Post says “Tribute” will be the first photo book of the Manhattan Beach Pier and for fans of his work, “every image from 1969 to 2020 will have the pier in it.”

As he did with previous collections of his work, he’s inviting fans of the Pier to have their names included in the new book by signing up at his website, http://www.johnpost.com

But signing up on his website is as digital as he wants to get.

“I don’t even have a cell phone,” says Post.

Due to COVID, the gallery is only open by appointments, except Fridays and Saturdays. People call the gallery, get a referral to Post’s home number and they connect that way. (They could also send an email.)

“You have to contact me by landline,” he says. “Life is short, and social media sucks up so much time. I’d rather meditate than tweet. I’m here for the long haul, slow and steady for forever. I like to think my reputation precedes me. People know how to get a hold of me.”

“He really paved the way for so many of us, before Instagram and digital cameras,” he says. “So much respect for him.” ER