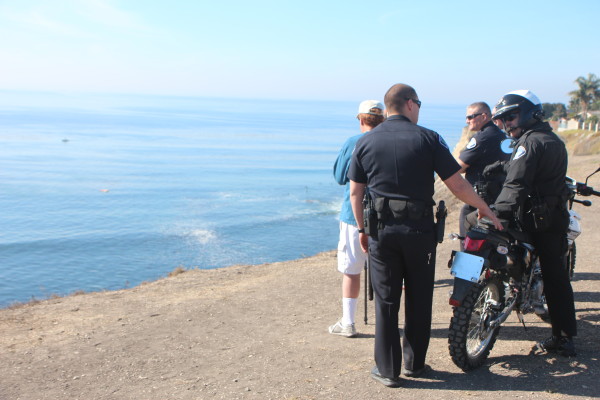 A federal judge ruled last week that a lawsuit aimed at the violent surf localism allegedly perpetuated by a group of Palos Verdes Estates surfers, known as the Lunada Bay Boys, does not meet the legal standards required for a class action suit.

The ruling, issued February 21 by U.S. District Court Judge James Otero, means that the suit will be winnowed down to three plaintiffs it names instead of the potentially thousands of surfers that it claims have been prevented from surfing Lunada Bay by an alleged “criminal street gang.”

Bob Cooper, an attorney representing Brant Blakeman, one of the nine men, who the lawsuit names as members of the Lunada Bay Boys, suggested the ruling all but destroys the case.

“Yesterday’s ruling by Judge Otero was a torpedo to the side of this lawsuit, but not a surprising ruling  by any means,” Cooper said. “Despite all of the publicity this case has garnered, we felt all along that it was never a viable lawsuit as a class action. This federal court has now agreed with us.”

“This ruling defeating the class action is a huge victory for the defendants in this case,” Cooper said. “We feel vindicated not only because the court has dealt a significant if not lethal blow to this lawsuit, but because my client Mr. Blakeman and his family have been unjustly,  we feel,  dragged through the mud of these slanderous accusations for these many months.”

But Victor Otten, one of the attorneys who filed the complaint on behalf of plaintiffs Cory Spencer, Diana Milena Reed, and the Coastal Protection Rangers, said that the ruling did nothing to damage the merits of the case itself.

“We didn’t get class certification due to a procedural ruling,” Otten said. “That doesn’t change the fact that there is a gang out there. They are conspiring with each other, communicating with each other, and have rules of engagement just like any other gang. And we will be able to go to court and let a jury decide whether or not what they are doing is legal or not. Our intention is certainly to go forward. We were disappointed by the ruling but it’s not going to change what the ultimate outcome is.”

Otten said he and other lawyers on the case are evaluating whether to appeal Otero’s ruling, but noted that a seperate class action case has also been filed in state courts, arguing that the Lunada Bay Boys are violating the California Coastal Act by restricting beach access to the public.

“We have a lot of evidence, including text messages and phone messages, which shows a conspiracy to keep outsiders from Lunada Bay,” Otten said. “In the worst case scenario, we proceed and get a judgement and restraining order against these really bad people. But we are not going away, and there will be justice for the public at Lunada Bay.”

The lawsuit was filed on March 29, 2016 in what Judge Otero playfully describes at the outset of his ruling as “Riding the wave of the Point Break remake,” initiated by plaintiffs “alleging they and other would-be beach goers have been unlawfully excluded from parks, beaches, and ocean access at Palos Verdes Estates….through threats, intimidation, and violence.” The complaint also names the City of PVE and Chief of Police Jeff Kepley for allegedly failing to intervene to stop localism practices that include physical violence both in the water on the trails at Lunada Bay, verbal intimidation, as well as vandalism to vehicles.

In frequently strong language, Otero rejects the class action on three of the four legal requirements for such suits, and most crucially attacks an expert witness’ methodology and assessment of how many people are potentially affected by localism practices. Dr. Philip King, a professor from San Francisco State University specializing recreational economics, submitted a declaration on behalf of the plaintiffs in which he used Trestles Beach in North San Diego County as a comparison by which he estimated Lunada Bay would be visited by 20,000 to 25,000 surfers annually rather than the 1,460 to 2,920 current annual estimated surf visits; King uses this number to calculate that the Bay Boys’ tactics of discouraging visits from outsiders have deprived would-be surfers of $50 million worth of enjoyment. Otero didn’t find King’s numbers credible, and particularly questioned the notion that Trestles is visited by 900 surfers daily as “an exceedingly unlikely number at a single beach”;  the judge wrote that even if this were true it doesn’t necessarily extrapolate to King’s estimate that 60 to 75 surfers could be expected daily at Lunada were it not for localism, and that each visit is worth $50 to $80 to individual surfers.

Otero also fairly scoffed at the number of declarations filed on behalf of the plaintiffs, 22, and invalidated the contents of all but nine of them as being beyond the two- and three-year statutes of limitations applying to the varying allegations contained within the suit.

“Plaintiffs, after having the benefits of months of discovery and significant publicity, could only muster 22 declarations from individuals who claim to have been harmed by actions of individuals at Lunada Bay over a forty-plus year span,” Otero wrote.

Cooper said that by ruling out a class action suit, the judge has in practical terms reduced the case to “a handful of small claims.” He said his client has been partially vindicated after nearly a year of having his name denigrated without cause.

“It’s really been a heartache for Brant and Laura Blakeman,” Cooper said. “They’ve had to use a homeowner’s policy to defend themselves, and they pick up the paper every day and read the Bay Boys are a coordinated gang, a street gang —  i.e., thugs. Up until now, there hasn’t really been any pushback. So everyone is walking around believing my client is part of an awful bunch of thugs. But Brant Blakeman is really a beloved member of the Palos Verdes community.”

The notion of the Bay Boys is itself little more than an urban legend, said Cooper, who is also a Palos Verdes resident.

“I understand that localism exists at most major surf spots around the world to one degree or another. There are a lot of people who surf that bay,” Cooper said. “They could no more organize themselves into a group then they could fly through the air. They aren’t organized; they are surfers. I mean, they come and they go, they move, and they fight each other for waves. It’s not anything that it’s painted to be.”

Otten, also a Palos Verdes resident, and a surfer, expressed confidence in the case going forward but also suggested that the larger cause has already been won. The city removed what was allegedly the Bay Boys’ “fort” a few months ago and he said police appear to be more engaged in preventing localism from closing Lunada Bay to outsiders. He said the class action suit was just one solution that he and another attorney on the case, Kurt Franklin, attempted to apply,  since it had not been tried before.

“We thought it would be a cool new approach to solve the problem,” he said. “But we will solve the problem. Fundamentally, the reason these guys have gotten away with this for so long is that they operate in secrecy. Nobody knew who they were. I know who every single one of them is, and pretty soon the public will know.”

Otten that plaintiffs were on the right side of history and that the beach would eventually be opened to far more than just surfing, but all recreational uses, “Body boarding, canoeing, whatever the hell they want to do up there,” he said. “This is just a part of [the legal process]. The public should go up there and go surfing. Call the police and tell them they are going…These guys are being forced to behave themselves. We know who all of them are. We are up there monitoring them. And if they do something bad, they are going to get spanked. This is the time for the public to take their beach back.”