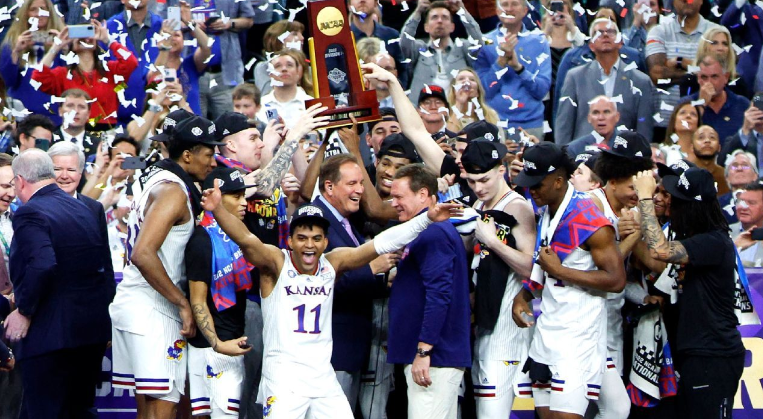 Kansas Jayhawks point guard Dajuan Harris and teammates Ernest Udeh, Kevin McCullar Jr., and Charlie McCarthy are having a bit of a different offseason as they’re coming off a Friday during which they barked instructions to players, by far, their senior during a match between “Team Graham” and “Team Simien” at the Kansas Fantasy Experience at Allen Field House.

The championship players were working as assistant coaches on Devonte Graham’s staff. Graham, a former Kansas guard who currently plays for the New Orleans Pelicans, coached his team in a loss to Wayne Simien’s fantasy outfit. Siemen, also a former Jayhawks star, was a champion with the Miami Heat in 2006.

“I want to be a teacher and coach one day, too. I’m out here practicing,” Harris said after the first game of the tournament, which is set to run until the end of Sunday (per the Kansas City Star). “We’re enjoying this.”

Previously, the Kansas coaches did most of the coaching in what used to be known as the Bill self/KU Fantasy Pro Camp but others are getting such opportunities now. The camp itself showcases a number of players from all over the United States.

The Kansas Fantasy Experience offers three days of basketball for players 30 years old and up, with trainers available to provide treatment such as icing and taping. It’s not all a grind, however, as participants get together for dinners during the night.

They also get to attend film sessions and meetings after games, while the Jayhawks’ facilities are available to them for the weekend.

“They are coming out and for real, playing. We’re just trying to show our support and back them up,” Harris added.

Real competitive college basketball will kick off later this year, in November and Kansas sports betting apps will give fans another reason to look forward to all the action as betting is now legal there.

Meanwhile, Bobby Pettiford and Joseph Yesufu, current Jayhawks guards, are working as coaches for Simien, whom they look up to.

“(He’s a) role model,” Pettiford said of the former All-American and Big 12 Player of the Year. “It’s fun going from player to coach, doing what Coach (Bill) Self would do or Coach Rob (Norm Roberts) would do. It’s all fun.”

“It’s an honor coming out and coaching the older guys (fantasy campers), helping teach them how to play the game. It’s kind of tough being a new coach, but we’re getting there,” Yesufu chimed in. 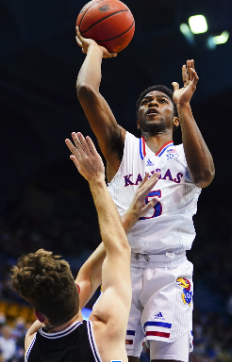 Jayhawks redshirt freshman guard Kyle Cuffe Jr. was an assistant on the team which lost the first game of the day on Friday.

KU redshirt freshman combo guard Kyle Cuffe Jr. worked as an assistant coach for a team that lost the first game of the day.

Cuffe added that the weekend’s NIL activity “is amazing.”

For now, the guard is just looking to have a good time, but he’s also trying to impress the JU head coach.

“I think our team … we’re going to stick with our team. We’re going to be good,” he continued. “Everybody is having fun, a good time. I’m trying to keep the energy up high, letting them know if we lose we can always bounce back.

The program’s players will head into a two-week early morning boot camp which will seek to tune their conditioning on Monday so they’re looking to enjoy the weekend’s activities prior to what should be a grueling period.

“I am loving it,” freshman Udeh said, speaking on his experience operating as a coach for a change.

“It’s fun to be on the other side of the ball. It’s been a fun experience. Going into Saturday, Sunday I can’t wait. This is great. I’m happy to be here. The NIL thing that has opened up for us (players) … great opportunities are coming from all sides. We appreciate it, for real.”