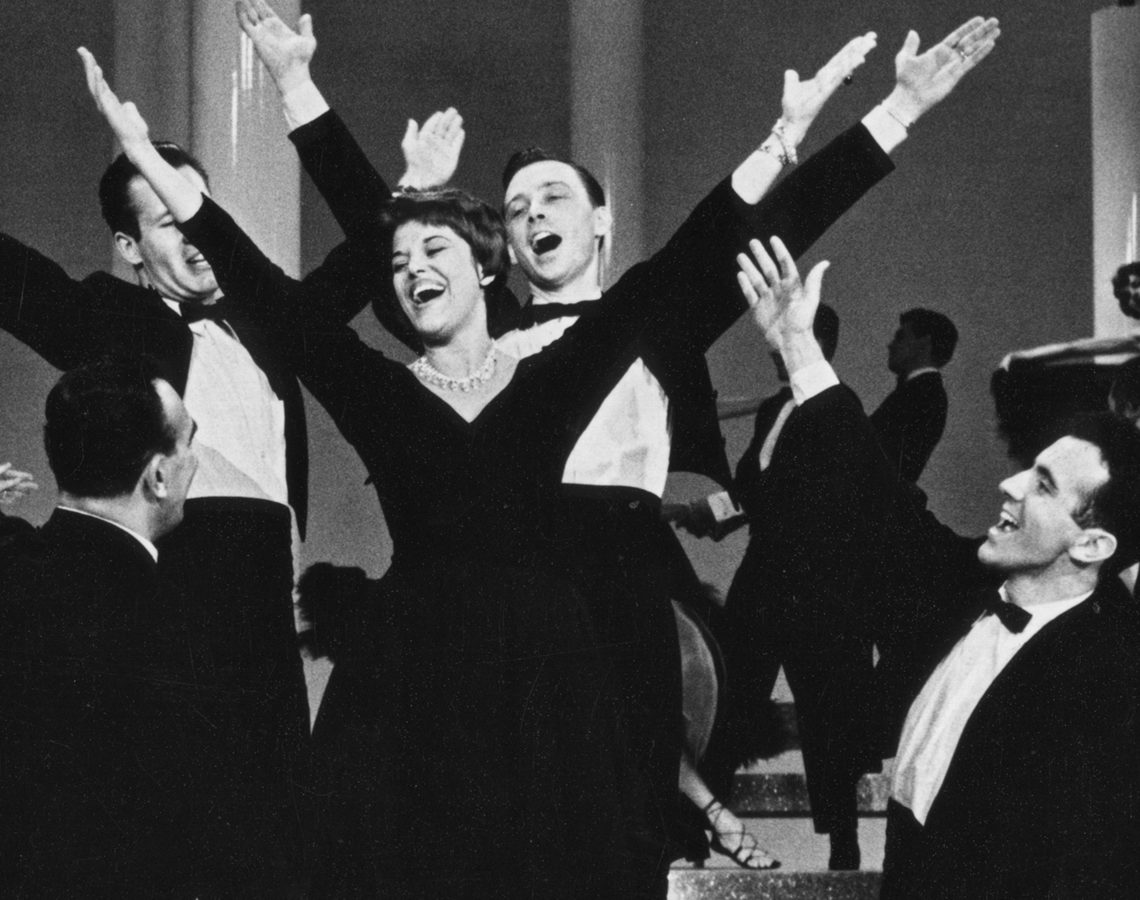 “Kaye Ballard- The Show Goes On” is a love affair directed by Dan Wingate about one of the most talented singer/actresses of the 20th Century who is virtually unknown to anyone under the age of 50. Her last television series regular roles were on “The Doris Day Show” (1970–72) and “The Mothers-in-Law” co-starring with Eve Arden (1967–69), as well as many appearances on “The Match Game” and “The Hollywood Squares.” She continued to make guest appearances on a wide range of television shows through the 90’s. Most of us of that TV generation remember her from those performances – a larger-than-life, loud, often hilarious actor with outsized comedic looks and personality. But this only scratches the surface of who she was and what she did, and Wingate serves up a delightful, delicious soufflé of the breadth of her talent.

Kaye Ballard was born Catherine Gloria Balotta in Cleveland, Ohio, to rather disapproving, perplexed Italian immigrant parents. She knew she wanted to be a star by the time she was five. She made her way to Vaudeville in her home town doing star imitations, instrumental and vocal numbers, as well as slapstick routines. Seen on stage by Spike Jones, a leading big band leader famous for presenting comedy sketches as well as music, Ballard was hired to be part of his touring troupe in 1943; she was not quite 18. Her timing was impeccable but even the sketches could not disguise what a vocal talent she was and within two years she left Jones for supporting roles in musicals both on tour and on Broadway. Every decade from the 50s through the 80s found her in a musical on Broadway, usually as the lead. In the 1950s she landed a role in Top Banana starring Phil Silvers, a top banana who did not enjoy sharing the spotlight and The Golden Apple where she was the lead. In the 60s she created the role of the Incomparable Rosalie (that’s actually the name of her role) in the hit Carnival! and the lead in the well-intentioned flop, The Beast in Me, based on James Thurber fables. The 70s found her in Molly, in which she played Molly Goldberg, culminating in her performance in the long-running production of The Pirates of Penzance in 1981 in a replacement cast that included Treat Williams, Robbie Benson, Jim Belushi, Patrick Cassidy, Pam Dawber, and Maureen McGovern, to name just a few. So many shows but very little recognition outside her fellow performers.

Often the star, sometimes in support, she built a following because of her enormous vocal talent, generosity towards others, and always optimistic view. When roles on Broadway waned, she developed a cabaret act mixing impressions and stunning ballads. She performed at the finest supper clubs in New York at the height of their popularity and sophistication. The biggest stars would come to see her perform. Kaye recounts the time that Judy Garland came, sat in the front row, and begged Kaye to “do her.” Kaye did a beautiful, emotional rendering of Garland that was not only a spot-on imitation but one that showed her understanding of the depth of emotion that can be shown in a song. But Ballard had her own style and it attracted legions of fans. 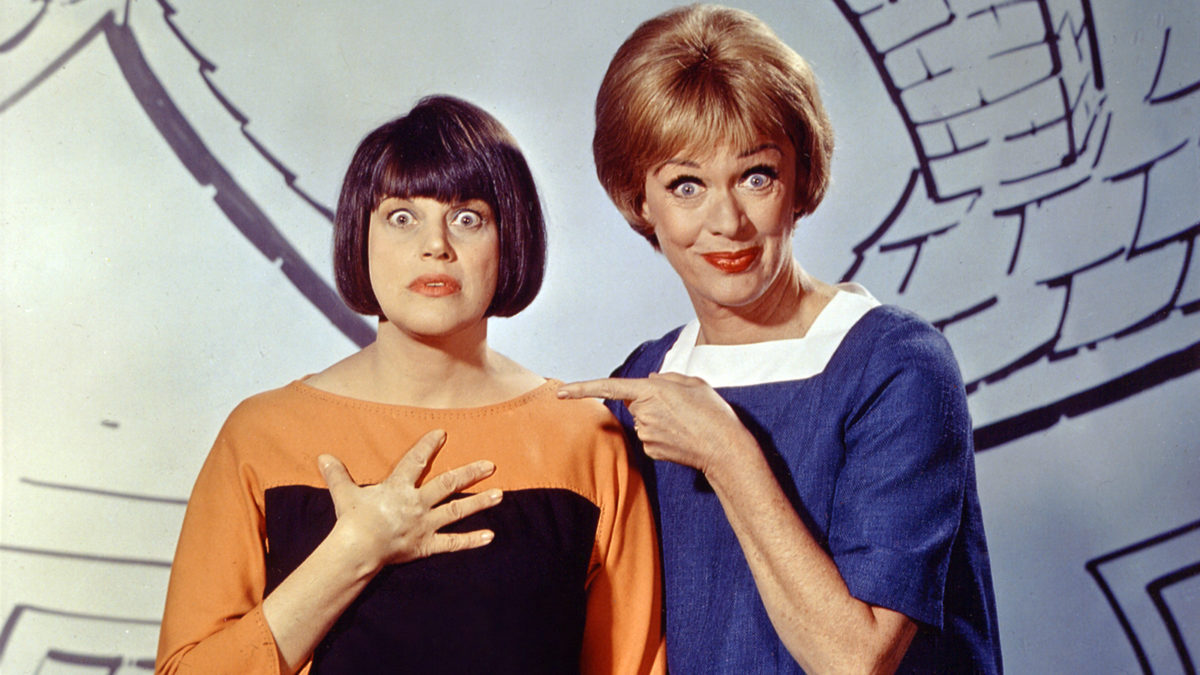 Kaye Ballard and Eve Arden in “The Mothers-in-Law.”

With the advent of television, she made many appearances on the Perry Como Show, the Garry Moore Show, and all of the evening and afternoon talk shows. She was a mentor as well as a talent giving guidance to Carol Burnett and a major boost to a new singer named Sandy Stewart to whom she gave a song that had been written for her by John Kander and Fred Ebb entitled “Color Me Blue.” That song was a hit for Steward, the first to sing it, as well as countless others. It was both an act of generosity on Ballard’s part, as well as a lack of foresight. Kander and Ebb also wrote a song for her called “Maybe This Time.” She recorded it, gave it its start but it went nowhere until Liza Minelli sang it many years later, wrongly claiming that Kander and Ebb had written it for her. In 1954 Ballard was also the first to record “Fly Me to the Moon,” first called “In Other Words.” She made it the B side to her recording of “Lazy Afternoon.” Again, another example of timing that worked against her. It didn’t become a hit until 1960 when Peggy Lee released it. By 1963, Lee convinced the composer to change the name and by 1964 Sinatra turned it into a standard.

When other venues seemed to disappear, she took her act to Vegas, opening for Ann Margaret. She did dinner theater, revivals, and revues. She had supporting roles in movies. She was always a loyal supporter of her friends and there are anecdotes about her early friendships with Eli Wallach, Anne Jackson, and Marlon Brando who invited her to an out-of-town preview of A Streetcar Named Desire. Jerry Stiller and Anne Meara listened to Kaye’s advice that they make their personal bickering, bickering that Ballard found hilarious, part of their comedy act.

Talking heads like Harold Prince, Jerry Stiller, and Rex Reed, among others, all remark on the fact that for some reason she never made it to the highest levels of Broadway or film. But there are hints in the unfolding of her trajectory that offer some explanation that spans from her undefinable look, to bad luck, poor timing, and that rare quality of generosity that occasionally interfered with her receiving the recognition she deserved. Having her production numbers cut from various Broadway shows because the stars were jealous; performing magnificently in shows that were less than; recording material that was ahead of its time; passing on material that became hits for other; all these factor in. But ever the trouper and optimist, she displays a joy and gratitude for a life well-lived. And that it was.

It is obvious that this was a documentary years in the making. The friends and colleagues speaking on camera were clearly filmed many years ago and, in several cases, (Carol Channing, Jerry Stiller, and even Kaye Ballard herself) have passed on. An acknowledgment of the time frame would have helped. Production values are minimal as might be expected from a film that was probably meant to be an archival record rather than a commercial documentary. There is no discussion or information on Ballard’s personal life. Nevertheless, what Wingate has given us that is priceless is a view into the professional career of “the greatest star you hardly knew.”