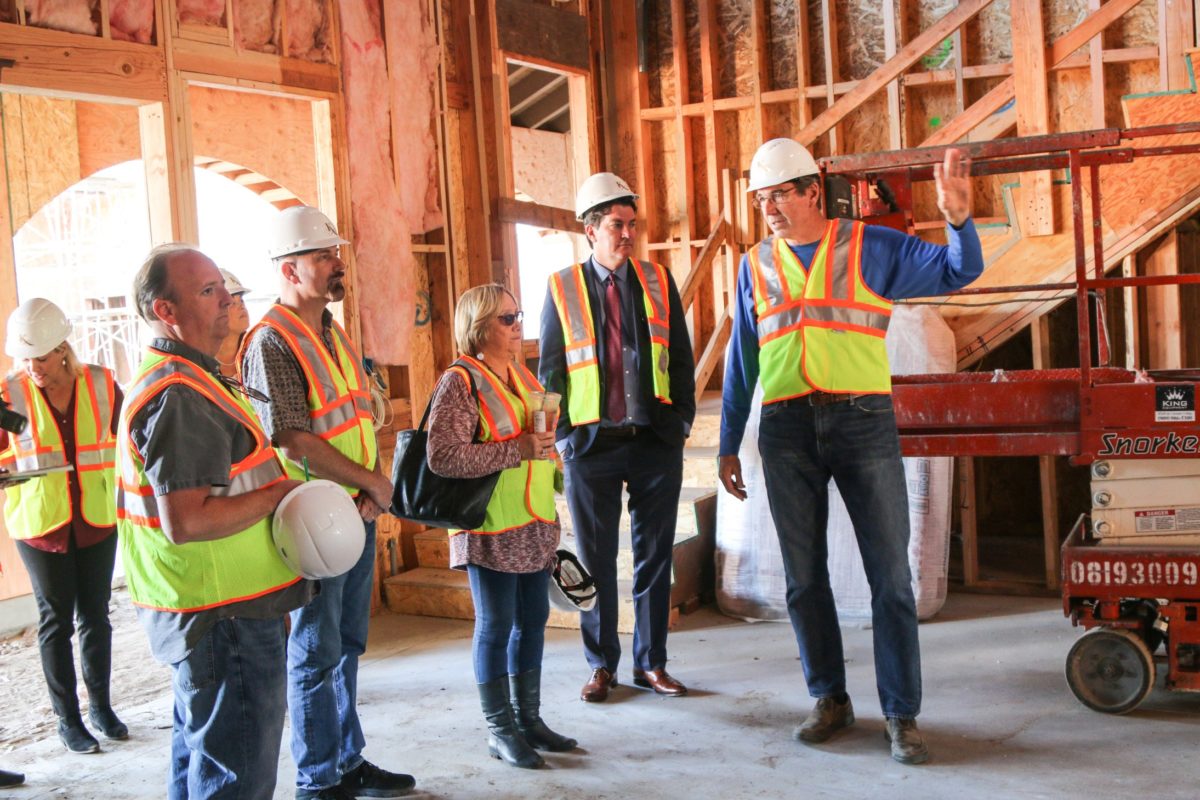 Redondo Beach Unified School District Superintendent Steven Keller paused for just a second during a tour of The Kensington, an assisted-living facility that’s being built atop the site of a former RBUSD elementary school.

He looked into an empty, unfinished closet, spotted a taped-over hole in the drywall, then looked over to Billy Shields, the head of Fountain Square Development, the project’s builder.

“So, what’s that for?” Keller deadpanned, pointing to the hole. “A gun safe?”

Based on Shields’ laughter, and the looks on the faces of Kensington’s representatives, no, gun safes aren’t likely to be among the project’s amenities, though they might argue the property will fit practically every other resident desire.

The approaching completion of The Kensington, an 80,000 square foot, 92 unit property, promises a new revenue source for the school district. The site, at 320 Knob Hill Road, was once home to Patterson Elementary School but was twice declared surplus over the span of three decades.

The district attempted for years to find a development partner for the site, considering at various times a grocery store, a commercial development, and a charter school. But no one was able to make the numbers work for the district. (“We had a project in here, a school, that had $1,000 in their bank account. At the end of four years, they had $2,000,” said School Board member Anita Avrick. “We canceled that.”)

In 2012, RBUSD found a willing partner in Fountain Square Properties and The Kensington, a small chain of retirement and assisted-living facilities spread over a handful of states, including two other facilities in Redwood City and the Sierra Madre.

RBUSD will collect $614,250 annually over the course of a 99-year lease, with escalators for inflation, which Keller says will be a buffer for the district. The decision to lease the property, rather than sell it outright, allows use of the revenue for more than only structural improvements throughout the district.

“The district is generating revenue that will help us during the lean years,” Keller said. “When the economy goes bad, we’ll have a flow of income.”

Valencia declined to provide estimates for living at the facility, though she said that prices would vary depending on a resident’s desired or required level of care. However, multiple sources indicated that rooms would begin around $8,000 a month.

Residents will live in one of three community wings: assisted living; early-to-moderate memory-care; or moderate-to-end-stage memory-care.

“The price really depends on what kind of room you pick and what level of care you’re on; those two items really predict and dictate how much you’re going to pay per month,” Valencia said.

Valencia said that the facility plans to be flexible with residents and their family members, allowing for open visitation hours and setting up individualized activities based on resident and family preferences.

She also believes that the company’s hiring practices are well-tuned to identify quality caregivers.

“You can tell even from a group interview by the way people respond and react to one another…you don’t want to hire someone who is rolling their eyes when someone else is talking, because they’re impatient,” Valencia said. “You can teach someone skill, but you can’t teach someone heart.”

The project itself has been built with an eye toward conservation. Patterson School’s historic kindergarten building has been renovated as an information center, and a classic mural lining its ceiling has been restored. The facility will also feature solar panels along its rooftops (which was driven by the school district, Keller notes).

“They’re bringing a great product we can all be proud of,” Keller said.

The Kensington is scheduled to open in 2019.