Photos and story by Phil Garner

As summer comes to a close a fever begins to rise in the blood of many scuba divers. Some who haven’t dived since last year are eagerly picking out their secret spot for for the biggest night in SoCal Scuba. Lobster Season. Beginning at 12:01 AM on the last Saturday in September a mad dash is made to every offshore island and spots all along our coastline. Divers come from all over the state and many travel here to partake in this crustacean grabbing frenzy. Dive shops promote opening weekend heavily with deals on lights, bags and lobster gauges, and don’t forget to sign in for your free T-shirt! Dive N’ Surf holds its Lobster Mobster contest. Charter boats are full for their trips to Catalina Island for diving into the wee hours of the morning. Fishing license sales go up dramatically. The internet bulletin boards are overflowing with talk about where the best lobster glory holes may be found and who has the best recipes. Although the season lasts six months, so many get swallowed up in the mob mentality that is opening weekend. 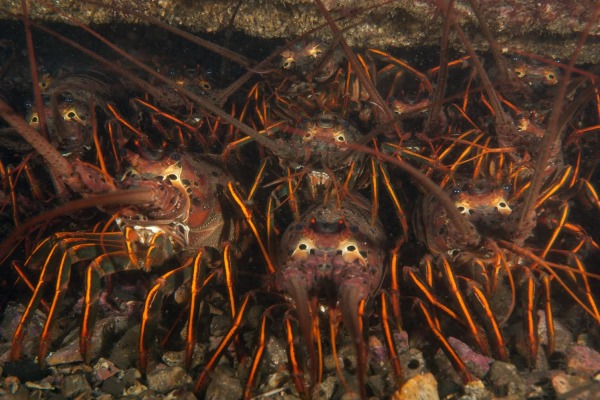 In Florida there is a two day mini season in July. It is rare that a year goes by when there isn’t at least one fatality during the two day madness. There have been 22 deaths during the mini season in the past decade from divers who were either ill-prepared to dive or became so locked in to catching lobsters that they forget simple tasks such as watching their air supply. I’ve seen divers pop to the surface gasping for air, then laugh about trying to grab that last bug when all of a sudden inhaling air from their tank becomes increasingly difficult. Some lose awareness of navigation and have to make a long swim back to the boat or beach. Add to that the stress of carrying the added weight of a light, backup light, a pound or two more on their weight belts to keep on the bottom and, they hope, several large lobsters in their game bag. Adrenaline pumping faster than their kicking fins increases heart rates. It is not the cholesterol in the lobsters that kill divers, but the divers themselves. Bill Holzer says it best. The two factors that kill divers are greed and arrogance.

This year was a particularly bad one for local divers. In Southern California there were at least five deaths involving lobster diving during the first week of the season. Some ran out of air, some were so over weighted with gear that they could not stay on the surface and a few heart attacks were experienced. California seems to be giving Florida a run for their money when it comes to senseless diver deaths. Every year you hear the same statement from the dive community. That last lobster is not worth your life. Stay in shape. Dive regularly.

Lobsters are nocturnal gatherers, making them easier to catch at night. You can still catch a limit of seven lobsters during the day, but you will likely need to pull them from their hiding places. They tend to dislike this and will dig their legs into the bottom. It’s much easier to pin one to the sand when they are out walking. Once you see a lobster that is within your grasp and appears to be of legal size you attack quickly. There are as many techniques as there are divers. Some prefer the two-handed clasp. Others use an aerial attack and pin the bugs from above. Some divers seem to tackle lobsters as if they were an NFL running back. 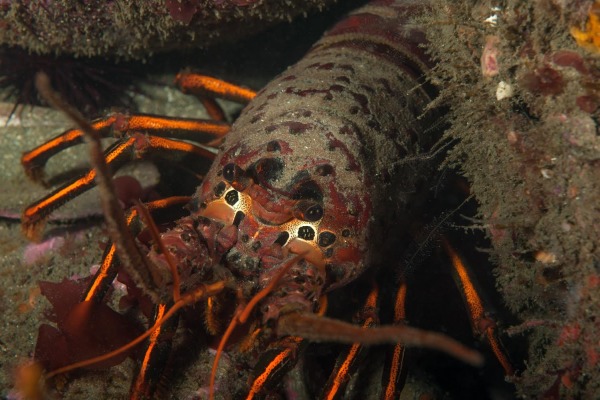 Whichever method you use ends with a similar result. Holding the lobster against your body, you fumble for your gauge to check the legal status of your catch. With one hand holding the lobster and the other trying to measure it, it is difficult to hold your light and get the bug into your game bag. Most divers wish they had three hands at that point.

By the time you bag your haul you are probably breathing heavily. You could ask your buddy for help, but lobsters make terrible dive buddies. Once you hit the bottom the blinders are on. All of your attention is on legs and antennae. With the heavy breathing, focused attention on finding lobsters and the darkness of a night dive, checking your pressure gauge is not on some divers minds. It is easy to glance at your gauge during the day, but at night you need to shine your light at it, taking precious bug grabbing time away.

It is important to make sure your gear and your own body are in shape for lobster diving. If you haven’t dived for a few months or are diving in an unfamiliar area it is recommended that you make a day dive or two to learn the site, refresh your skills and make sure your gear is in working order. Don’t be in a hurry to get as many lobsters as you can on opening night. It is a long season and the lobsters will still be there next week. Try to remind yourself that you have a finite amount of time under water. There is no overtime in lobster diving.