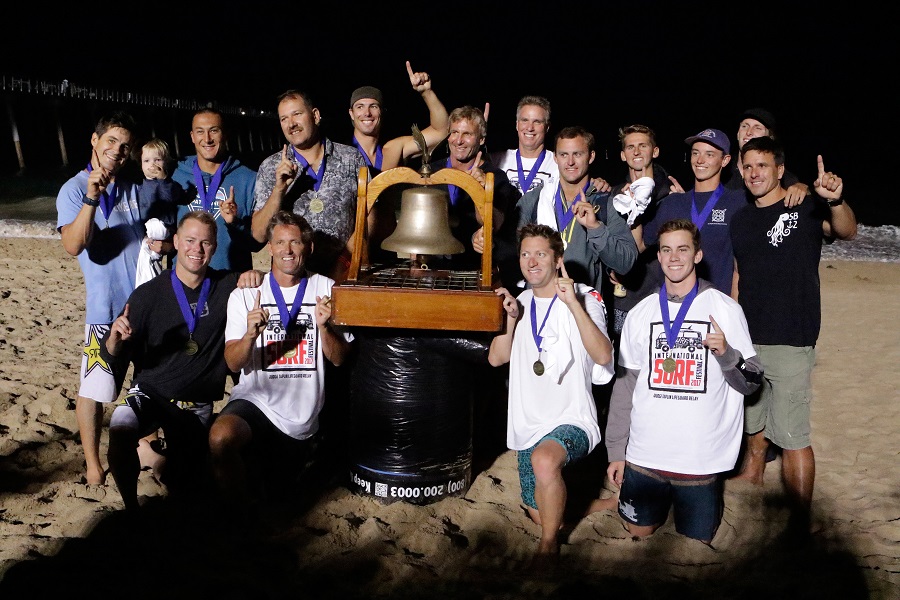 “We didn’t look as good on paper as in recent years, which really fired up the LA Central team,” said the Manhattan Beach resident. “This year’s win was really fun because we had so many new people on the team.”

“I was so impressed with rookies Will Abele and Wyatt Kircher who held their own against Olympic swimmers Azad Al-Barazi and Dave Walters of the Central team,” Seth exclaimed. “I’ve been training with young prospects so I am in the best shape that I’ve been in years.”

It is customary for members of the winning team to ring the perpetual award – the Taplin Bell – the number of times they have won the championship. The names of the winners are engraved on a brass plaque listing past winners the Taplin Bell.

Seth, who rowed with longtime teammate Dave Cartlidge in a new dory purchased by Seth’s wife Kristi as a sponsorship for her real estate company, rang the bell for the 18th time, one behind teammate and record-holder Mel Solberg of Torrance. Both agree that the tryouts to make the team are more stressful than the actual competition.

“Ringing the bell never gets old,” said Solberg, who rowed with Jeff Lombardo. “Every year I wonder if we’ll win but just making the team is tough. Experience plays a big part in the competition and with four new members on the team, I didn’t think we’d win as big as we did. We held a 10-second lead when boards started.” The  dorymen follow the paddlers, who follow the swimmers.

Ringing the bell for the first time were Abele, Kircher and paddlers Matty Gallas and Jake Miller.

Manhattan placed second ahead of Dockweiler, who won the 6-Lifeguard Run ahead of Manhattan and Santa Monica.