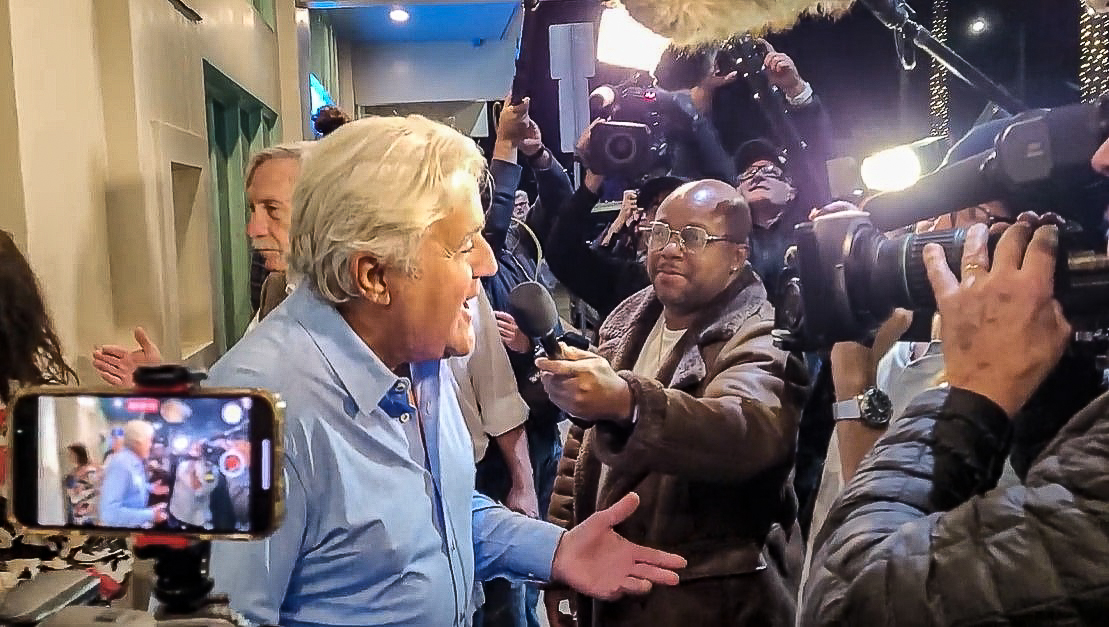 Jay Leno talks to reporters Sunday night outside Comedy and Magic Club in Hermosa Beach, prior to returning to the stage just one month after being badly burned. Video image by JP Cordero

Sunday evening, one month after Jay Leno suffered face, hand, and chest burns so severe he required skin grafts, he was welcomed back to the Comedy and Magic Club with standing ovations at the start, and close of his performance.

Leno was burned November 12, when gasoline from a 1907 steam car he was working on caught fire. Asked upon his release last Monday from the Grossman Burn Center if he’ll ever drive the car again, he answered, “Sure. The car didn’t do anything wrong.” 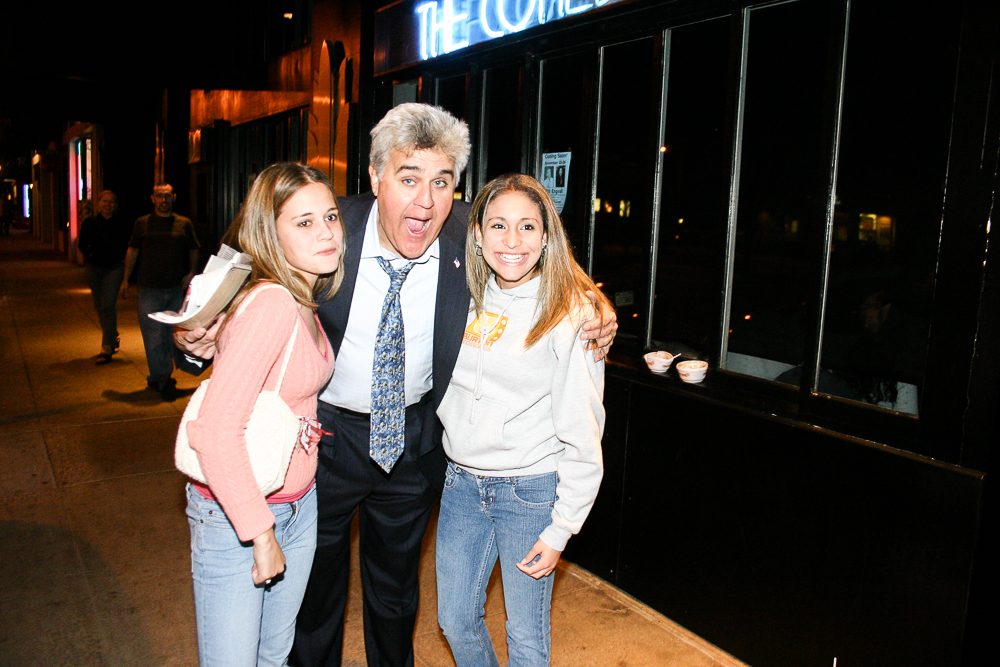 Jay Leno with fans in front of Comedy and Magic Club in 2004, when he was host of The Tonight Show. Photo by Kevin Cody

Leno quipped to the Sunday night audience that he planned two shows for the evening. “One regular, one extra crispy.” But otherwise, he did not allow his injuries to distract from his performance.

His rapid return to the stage was reported by media nationwide, including The Washington Post, Good Morning America, and TMZ. A phalanx of TV cameras greeted him after he backed his blue Tesla into a Hermosa Beach Police car while parallel parking in front of the club. (Neither vehicle was damaged.)

“The Elephant Man is here,” he said to the press swarm as he got out of his Tesla.

Press was banned from attending Sunday night’s performance. But he took time before entering the club to thank the reporters when they congratulated him on his return.

Leno’s courtesy to the press, while spurring coverage of his return performance, was characteristic of his aversion to celebritydom. “He thinks of himself as a car mechanic who does comedy,” Comedy Club owner Mike Lacey said.

Leno has appeared at Comedy and Magic almost every Sunday since it opened in 1978. Fans thought his local performances would end when he succeeded Johnny Carson as host of The Tonight Show in 1992. Instead he increased his Sunday appearances.

He’d come on stage holding a stack of joke cards. If people didn’t laugh after he read a card, he’d throw it over his shoulder. If they did, he’d put the card on the stage stool, which he never sat on. He’s a pacer. The following week, during his Tonight Show monologues, he’d repeat the jokes that had gotten laughs. 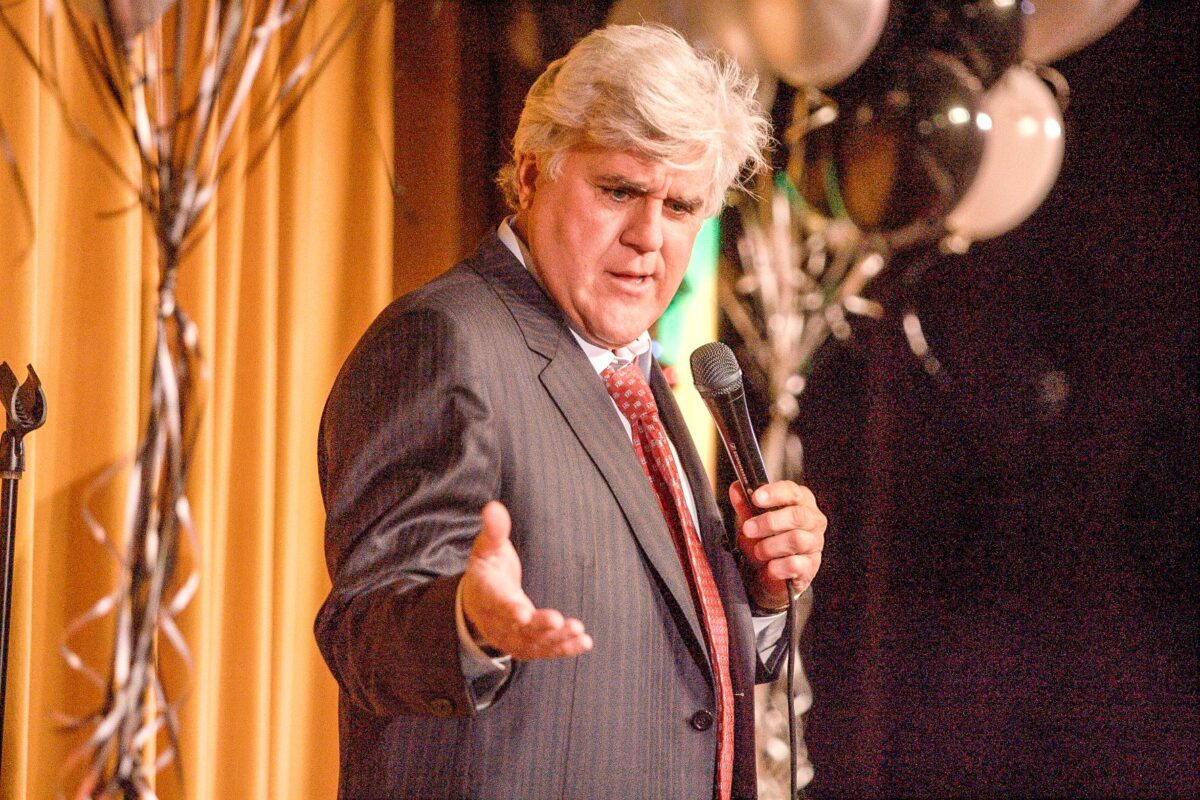 Jay Leno performing at Comedy and Magic Club in 2009. Photo by Patrick Fallon

Leno likes performing at Comedy and Magic because owner Mike Lacey treated him and fellow comedians respectfully in their early years.

Leno is similarly known for mentoring other comedians, among them a young Arsenio Hall, whom Leno convinced to move from his native Cleveland to Los Angeles. When Hall learned Leno was to perform this past Sunday, he called Lacey and insisted on being the warm-up act.

Lacy discouraged Leno from coming back to work so soon after the accident. Leno responded, I have to work.

Sunday evening wasn’t the first time Leno has returned to the stage while still recovering from serious injuries. He told his audience about a motorcycle accident he had when he was 35, doing 100 miles per hour on a Friday night. He spent the weekend in a hospital bed, unable to walk. That Monday, he hosted The Tonight Show.

“I don’t mind being old, and I don’t mind looking old,” the 72-year-old said when recounting the motorcycle accident. “But the other night I was sitting on the couch when I yawned, and turned my head at the same time. Aahh. What was I thinking, at my age, trying to yawn and turn my head?” 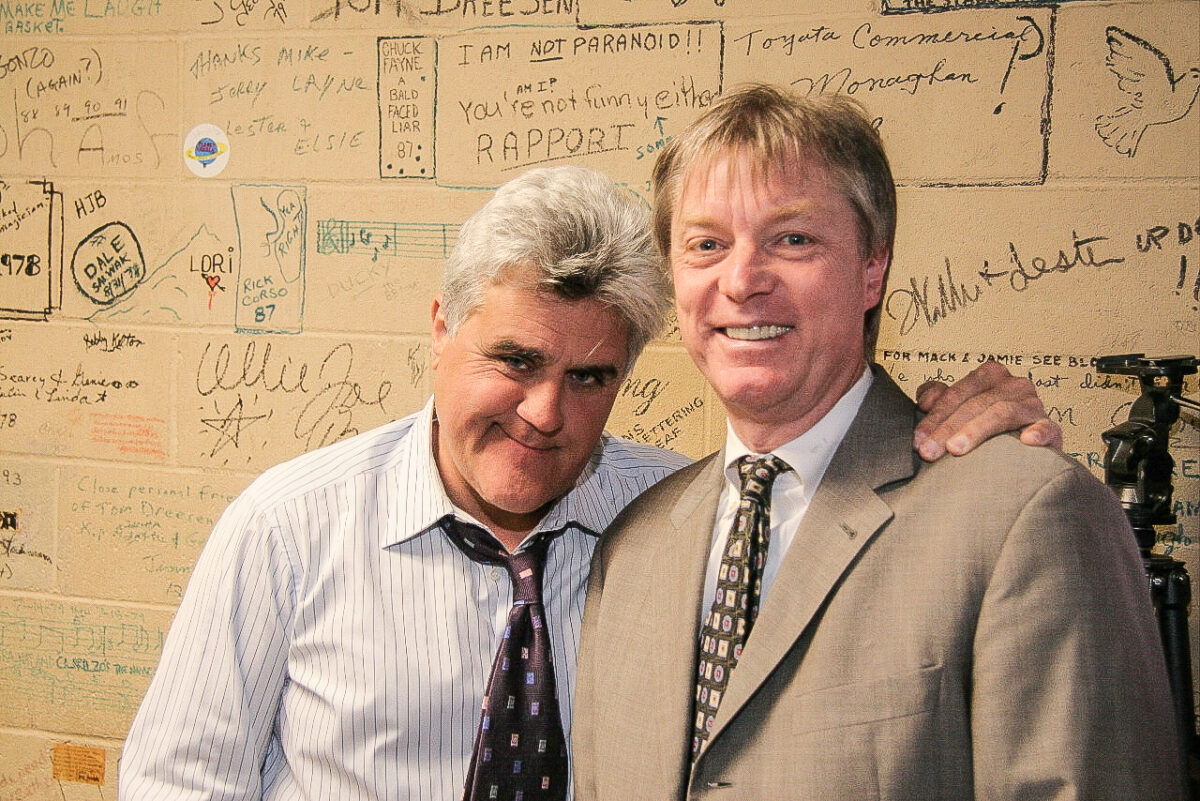 Jay Leno and Mike Lacey, in 2005, in the Comedy Club green room. Photo by Kevin Cody

Nearly a decade after leaving The Tonight Show, Leno performs almost as frequently as Bob Dylan. Also like Dylan, his audiences have included the Nobel Prize Committee.

“Being an American,” he began, when hosting a Nobel Prize event in 2015. “I want to apologize for the Kardashians.” He paused to let laughter pass. Then he said, “And can I throw in Donald Trump.” The laughter was followed by thunderous applause.

He told the Nobel Laureates  he shared their concern about global warming.

“At the current rate, Putin will be shirtless by February. No one wants to see that,” he said. The applause was even more thunderous. 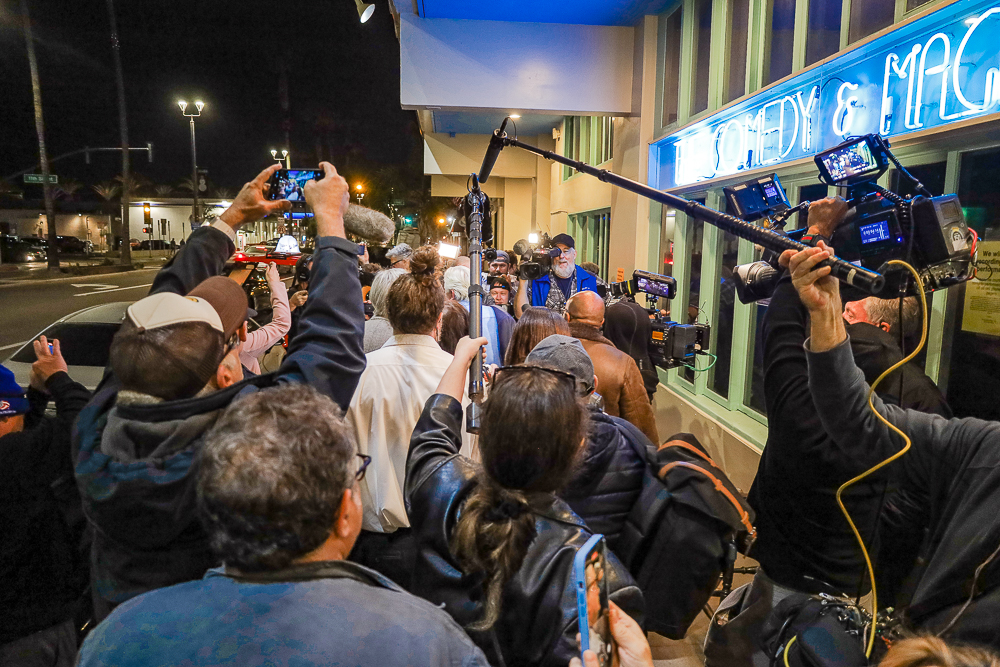 Jay Leno’s return to his regular appearances at Comedy and Magic Club in Hermosa Beach was national news Sunday night. Photo by Kevin CodyVisitors to Hermosa are always astonished to see Leno’s name on the Comedy and Magic marquee, and doubly astonished on learning tickets to the small club are just $30.

Then, at the insistence of the out of town visitor, the local agrees to attend a Leno show one more time. And one more time is blown away.

Leno delivers jokes at a pace that gives the audience whiplash. When the laughter crescendos, he delivers another joke, which always seems funnier than the previous one. Like alcohol, his show gets better as it progresses, until everyone’s exhausted, except the one crazy friend who wants to keep going.

Sunday night was no different.

“He didn’t want to get off the stage,” Hermosa Beach resident Dennis Maloney said.

When finally, Leno looks at his watch, and realizes its closing time, he’ll propose just one more round for the road. He’ll stand middle stage, and deliver a joke like you’d hear at Toastmasters. Except the joke will have the funniest, most unexpected punchline the audience has ever heard. That’s the joke the audience tells the following day at work, because the blizzard of jokes that preceded it will have sadly melted away. 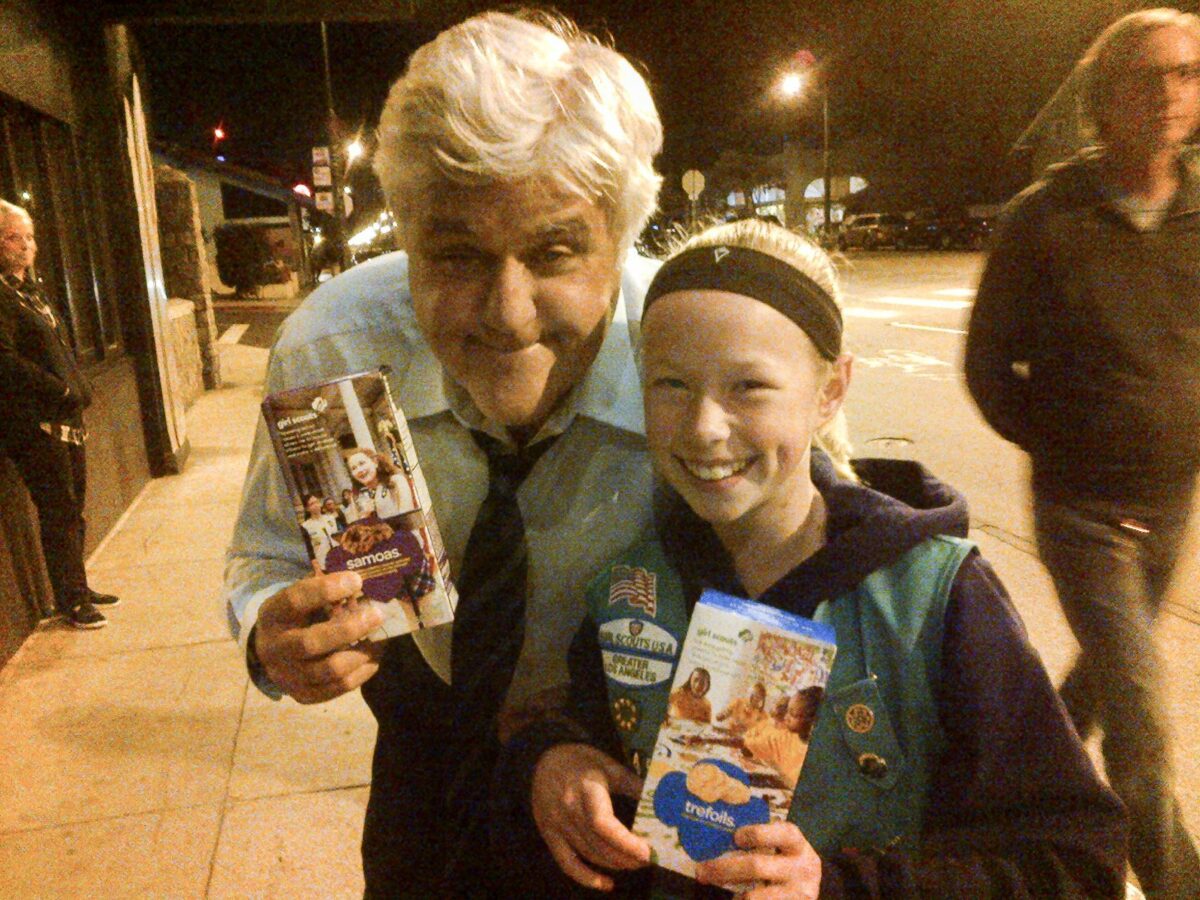 Jay Leno with Girl Scout Micah Worner outside Comedy and Magic in 2014. Leno said he only likes Oreos, but would buy cookies anyway and give them to the club’s staff. Photo by Elka Worner.

After the show, the club is slow to open the exit doors. Lacey wants to give Leno time to get away.

If he knows a special person is in the audience, not a special celebrity, but a soldier, or first responder, a Comedy and Magic server will tap the person on the shoulder, and say, Jay is waiting outside to see you. On the sidewalk in front of the club, Leno will thank the person for their service, and then insist they pose with him for a photo while he makes a goofy face.

As for his own service, if Leno thinks it’s important, he doesn’t admit to it.

Following Sunday night’s return to Comedy and Magic, while he walked to his car, a TMZ reporter asked him, “Where did you find the strength to get back up there?”