Letters to the Editor: Uncle Stavros, cliffs and struggling artists 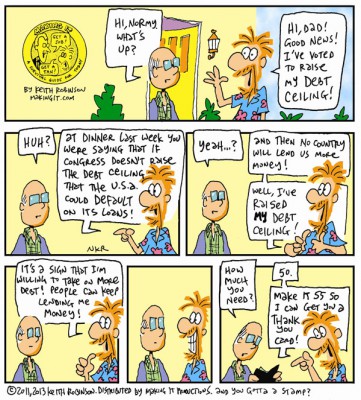 Making It, by Keith Robinson

In reference to the write up of Uncle Stavros Café on December 27th in your paper, I would like to forward this rebuttal against Mr. Foss’s rant regarding Uncle Stavros Café. I wish to express to your magazine editor and your readers several points which I have observed.

Hopefully, I can make clear these points without the use of hyperbole, apple polishing, personal issues and fatalistic raving that your Mr. Foss apparently uses to prove his command of the English language.

My family has lived in Manhattan and Hermosa since 1906, we have seen many restaurants come and go. We love Uncle Stavros Café. For many reasons, mainly their abundant use of fresh ripe produce. On speaking with the owner, I discovered that they actually get up at 3 a.m. 3 times per week to hand pick and buy fresh produce at the LA farmers market.

It is clear to me that Uncle Stavros Café is just that, a café with some Greek dishes. The owners kindly let me peek at the upcoming new menu and I was delighted to see scampi, pizza and pasta dishes all to be unveiled in the near future.

I have been in the food and wine trade most of my life, both as wine maker in Mendocino county and restaurateur in Europe for eleven years. When I came back home from Europe last year I was happy to see the café reopened by the daughter of papa Stavros who opened it some 30 years ago. I bring my family there at least 3x per week; and have tried almost everything. I have never had a bad experience; I have always received expert service as do the rest of the patrons who I observe while we dine.

Why is it then should your magazine be supporting a writer who’s sole desire is to tear them down? Shouldn’t we rather be supporting home grown local establishments?

I have spoken to my peers and colleagues whom live in Manhattan and Hermosa and Los Angeles and none of them recognize Mr. Foss as an authority on food or wine.

We’ve enjoyed reading the Easy Reader over the years, but this article has us bewildered. Why was this individual given so much room to assail the café? Is there a chance we might see more human interest stories and less nonsense. And, oh yes, if you do go across the street and eat at the other place, you most certainly will NOT find the same food at $3 less. We tried the “other place” twice, and we won’t be going back. Sounds like Mr. Foss has a special interest or bias between the two establishments.

We wish all of you the best for the New Year.

Thank you Bondo Wyszpolski for (ER’s Dec. 27, 2012, page 20) “Framing the Galleries.” Truly, during this frigid economy, the art world is experiencing severe struggles just as the earth’s history surrenders its evidence that when a culture satisfactorily fulfilled its acquisition requirement of water, food, and shelter; then the artists of that culture were at their best level of creativity.

In an very very early art gallery Chauvet Cave of southern France dating 30,000 to 32,000 BP where bedecking its stone walls and engraved rocks, this Aurignacin period of brilliant artists recorded their place in history; their graphic sagas speak well of their time of plenty water, food, and shelter.

My husband Chuck and I are artists noticing too well the struggle. Chuck is the air and I am the fire framed into their imaginary intertwined identities seems to soften our material challenges. Always vigilant both of us share immense gratitude for one another through what creation has granted us. We pause to soberly realize our chapter which we joyously claim.

A frequent bugaboo of the “fiscal cliff” debacle was the “milk cliff” – the threat of milk price doubling, if Congress failed to extend dairy subsidies. Parents were forgoing other necessities, because their children “had to have milk.”

Most industries would gladly give up their tax loopholes for that kind of product loyalty. But this one is totally undeserved.

Most African-Americans and Asian-Americans suffer from cramping and diarrhea because they lack the enzyme to digest lactose in cow’s milk.

The good news is that green leafy vegetables and legumes supply all the calcium and proteins touted in cow’s milk, without the excess calories and other yucky factors noted. Every supermarket offers a huge line of dairy-free milks, cheeses, and ice creams made from healthy nuts and grains.

This is why USDA’s current Dietary Guidelines for Americans, shunt dairy (and meat) off the recommended plate of vegetables, fruits, and grains.

Cow’s milk is produced for bovine – not human babies. Let’s give our kids a healthy start!

Citizens of Redondo Beach, in March you will determine the quality of life we all will enjoy…or not, in the South Bay for decades to come. Please research Measure A and make up your own mind. I am convinced if you do, you will vote Yes on A and say No to the AES power plant rebuilding. Don’t believe the misleading campaign mailers being sent out by AES; the large, out-of-state corporation that is willing to trade your health for their profits. They cannot be trusted to do what is in our best interest. They have over a decade of deceiving and scaring the public to maximize profit. In 2009, AES spent hundreds of thousands of dollars to defeat Measure UU and protect their special interest exemption from paying the city’s Utility Users’ Tax on the gas it uses to produce electricity. They are doing the same with Measure A. Councilman Aspel was quoted as saying, “Unfortunately, people who voted by absentee ballots were voting based on fear and not the truth. I firmly believe people were duped by AES.” In 2002, the Federal Energy Regulatory Commission found that AES and Eric Pendergraft conspired with Williams to artificially raise our electric rates by keeping plants off-line and ripping us off of $10 million dollars. AES is a cancer, literally and figuratively, in our community. It is time to remove the cancer. Visit nopowerplant.com to get informed and involved. Truth can win out over lies. Vote Yes on A!

I feel it is important to respond to the absurd claim that since the AES power plant has been around for years that it must be safe.

There is no good or safe level of toxic pollutants. Government standards of “acceptable” pollution are based upon the concept of how many additional toxic effects are we willing to tolerate in the way of premature death and added illness burden. Make no mistake about it, the rebuilt power plant will run more often and spew out a much greater tonnage of toxins that are not only known to increase respiratory disease (such as asthma), cardiac disease, cancer, and a host of other physical illnesses, but we now know that even low levels of these pollutants increase the incidence of autism and late life mental decline, as well as negatively impact our children’s brain development. The new plant will have lower smoke stacks, a modification that will make the new plant even deadlier.

The rebuild plant will run more often due to contracts AES will obtain to provide power to those outside of our area and not because we in Redondo Beach need the power. The plant will run more frequently only to make this out of state billion dollar company even richer. Power plants no longer need to be near the ocean. They never needed to be near large population centers. It is time to retire the AES power plant

Please vote YES on Measure A and NO to rebuilding the AES power plant.

I want to express my continuing heartfelt thanks to all Manhattan Beach residents for the honor and privilege of serving our wonderful community. I’m now campaigning door-to-door for re-election in the March 5, 2013 City Council election.

For many years I’ve passionately devoted countless hours serving our community. If you want to know what I will do as your City Councilmember, look at what I’ve done during my four years (and previously as a volunteer City Commissioner for nine years) and as an active community volunteer for seventeen years.

I’ve always been accessible, and will continue to solicit input from all members of our community, persistently work hard to improve our quality of life and keep our city safe, passionately practice open and transparent government, and provide vigorous financial oversight and accountability (including ongoing pension reform).

Always feel free to email me your suggestions, ideas, comments and concerns at WaynePowell4MB@gmail.com or call me at (310) 545-2184.

I care to do the very best job I can for our city because I love Manhattan Beach and I will continue to work hard representing you. It would be an honor to earn your vote.

Please visit my website at www.WaynePowell4MB.com for information on my qualifications and City Council accomplishments, as well as how you can volunteer for my grass roots campaign.