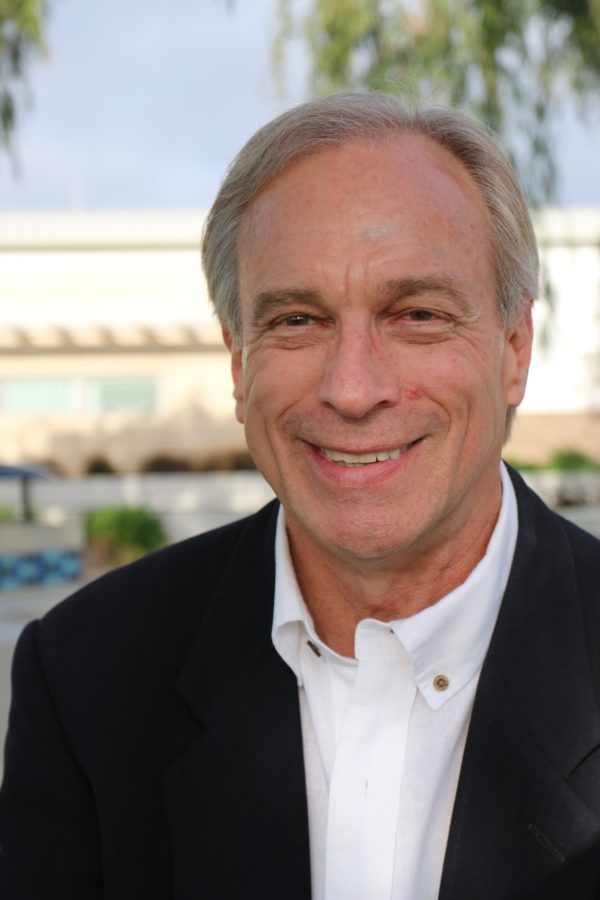 Craig Cadwallader has many gifts. He’s articulate, thoughtful, and —  perhaps most unusually within the rough and tumble of local politics —  kindly spoken, carefully reasoned, and cheerfully unruffled. He’s also almost omnipresent at Manhattan Beach City Council meetings and particularly at all ocean-related events, owing to his deep commitment to marine environmental protection.

But Cadwallader, who is policy director of the local Surfrider Foundation chapter, has been notably absent for the last two weeks. Surfer and fellow activist Morgan Sliff announced the reason at Saturday night’s South Bay Boardriders Club annual Big Wave Awards: Cadwallader nearly lost his life due to an unusual intestinal blockage and has been hospitalized since April 19.

Cadwallader had been experiencing pain for several days but refused to have it checked because he was focused on Manhattan Beach’s expansion of its plastics ban on April 17, a Surfrider meeting the following day, and the upcoming hearings regarding a proposed desalination plant in El Segundo. When he was finally convinced to go to the hospital, doctors immediately realized he was in severe risk. That night, he underwent surgery for seven hours.

“They said if he had waited any longer it probably would have burst,” Sliff said. “It was already life-threatening.”

Part of Cadwallader’s hesitation may also have been that he lacked medical insurance. Cadwallader is a marketing professional and website developer who runs his own business, Primal Image. He was awarded the Manhattan Beach Chamber of Commerce’s “Business Person of the Year” in 2003 but has increasingly prioritized his activism over his business.

Jose Bacallao, operations manager for Heal the Bay’s Santa Monica aquarium and a fellow environmental activist who has worked alongside Cadwallader, said his friend would frequently refuse pay for development work almost always done for a good cause.

“He’s just giving,” Bacallao said. “He’s busy taking care of others and forgets to take care of himself, which is a lecture we’ve been giving him for some time.”

Cadwallader was a key player in the defeat of proposed oil drilling in Hermosa Beach three years ago and has been instrumental in the single-use plastics bans at both the municipal and state level.

Mayor Amy Howorth said Cadwallader has been instrumental in developing Manhattan Beach’s often cutting-edge environmental policies, both as a member of the city’s environmental task force and as a tireless advocate at council.

“He always brings data and research to any of the topics he discusses,” Howorth said. “He has actually helped staff in the past with finding the right research. He is always gentlemanly and kind and courtly and credible. If someone disagrees with him, he doesn’t demonize anybody. It’s not about that for him. He’s stalwart —  he’s always there. You can really count on Craig.”

“I always call him the Man in Black, like Johnny Cash,” Howorth said. “He’s always wearing a dark jacket, he’s tall, and he’s quite a force and so incredibly important in the development of our city’s environmental policy. Without him, I don’t know if it would have happened the way it did.”

Fellow activist Joe Galliani described Cadwallader as “an old-school gentleman” whose equanimity and gentle reasonableness allows him to be effective beyond partisan divides.

“I think of him as a member of the family —  everybody is related to Craig in some way because he’s like Uncle Craig who takes care of all of us,” Galliani said. “He tells it straight, but he’s like the conscience of the ocean for all of us.”

His passion also comes with a cost, Galliani said.

“I’ve worked about a decade on environmental issues with Craig, and his hallmark has always been his obsessive drive to do the work —  at his own personal expense,” Galliani said. “Even to the extent of having a social life or celebrating his own birthday…We’d have to tell him, please stop working for 10 minutes, sit down, and break bread with us. He’s definitely paying the price for that now. He’s at the age you just can’t work 18 hours a day, not eat right, not exercise, and just get back to work after a few hours sleep.”

His friends have launched a GoFundMe fundraising drive to help with Cadwallader’s expenses. His medical bills are expected to exceed $200,000. Sliff said he was initially uncomfortable about receiving help, but after a second brush with death in the hospital earlier this week when he suffered a bad reaction to food, he’s come to embrace his friends’ help.

“I really admire how he puts everyone before himself,” Sliff said. “He’s fighting for this cause that is so important and integral to the survival of our species. So he’s really fighting both for those who are close to him and for those he doesn’t know, who are on the other side of the world. That is kind of the definition of being selfless.”

His friends had to laugh at some aspects of Cadwallader’s predicament. The timing of his hospitalization, just after the release of the proposed El Segundo desalination plant’s draft Environmental Impact Report and coinciding with public meetings on that topic, has pained him almost as much as his medical issues.

“He’s walked this horse to the river and now he can’t be there to watch it drink,” Baccalao said. “He’s so frustrated and concerned.”

The other thing bothering him —  all the bags and tubes connected to him in his hospital bed are made of plastic.

“It’s driving him nuts,” Galliani said. “He has to just grin and bear it.”

He’s also going to have to get accustomed to the fact that people are rallying for a very specific environmental cause —  his recovery, both financially and health-wise.

“We need to be there for Craig,” said Howorth. “Because whether it’s the city or the ocean and beaches, he’s been there for us.”