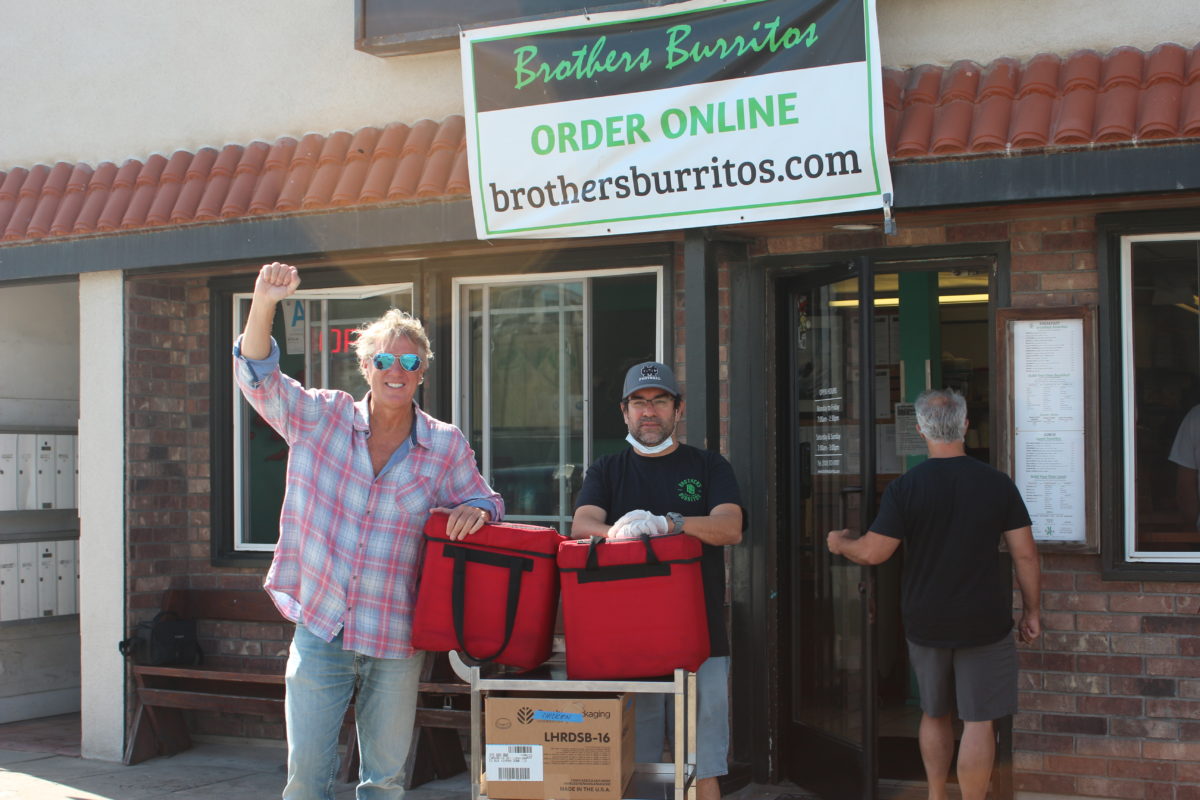 Last week, on the day after Los Angeles County beaches reopened, surfers emerging from the waves left wet footsteps as they trod past the 11th Street entrance to Brothers Burritos in Hermosa Beach, slowing as the familiar smell of the post-surf favorite wafted out the door. The scent was a bit more powerful than usual, because around the time the winds began to switch onshore, co-owner Ron Garcia emerged pushing a cart laden with scores of burrito bowls.

The bowls were bound for Meals on Wheels, a gift from Hermosa resident Todd Maxwell and Manhattan Beach resident Mike McKinnon. The two felt inundated by negative news emerging out of the coronavirus pandemic, and were looking for a way to contribute to the charitable efforts that have emerged in response.

“I feel for people who are struggling to make ends meet,” Maxwell said. He runs a digital marketing firm and said business has dropped by about 50 percent in the last two months, but knows he is better situated than many, including his friends in the South Bay service industry. He and McKinnon, a client of his who runs an insurance agency that has been able to stay open during the closures ordered to slow the spread of the virus, settled on buying food, so that their donation could also bolster one of the local restaurants hit by the closures.

Laurie Garcia, who owns Brothers with her husband Ron, said that large orders for charitable causes like the Meals on Wheels donation had become an increasingly important part of Brothers business, with walk-in traffic down and dine-in service prohibited. They’ve sent burritos to healthcare workers at Marina Del Rey Hospital and at Martin Luther King, Jr. Community Hospital in Willowbrook.

Maxwell and McKinnon considered donating food to a hospital, but switched course after a bit of investigating, including a conversation with a friend who works as a nurse in an intensive care unit, who assured them that she had “never eaten so well.”

“We thought, everybody’s bringing stuff to hospitals, let’s see if we can’t find a way to help the elderly,” said McKinnon, whose mother has Alzheimer’s Disease. Maxwell added that he was motivated in part by memories of his grandmother, who played an important role in raising him.

Laura Bohm, office manager at the Torrance-Lomita Meals on Wheels, grabbed the food outside Brothers Thursday morning. Bohm said that the coronavirus pandemic had caused the number of people seeking delivery from her location to more than double. Meals on Wheels provides food for those who are confined to their homes because they are handicapped, chronically ill, aged or infirm, categories that overlap with the populations scientists say are most at-risk from COVID-19, the disease caused by the coronavirus.

The pandemic has hit Meals on Wheels from both ends. Along with increasing demand, it limited the availability of volunteers to staff a kitchen to prepare hot meals. And it cut off the service’s primary source of funding, a thrift store on the Palos Verdes Peninsula that has had to close its doors. Contributions like the burrito bowls, she said, have been essential to providing their clients with needed nutrition.

“We’ve had some great donations. That’s really what’s sustaining us right now, because our regular funding has dried up,” Bohm said.