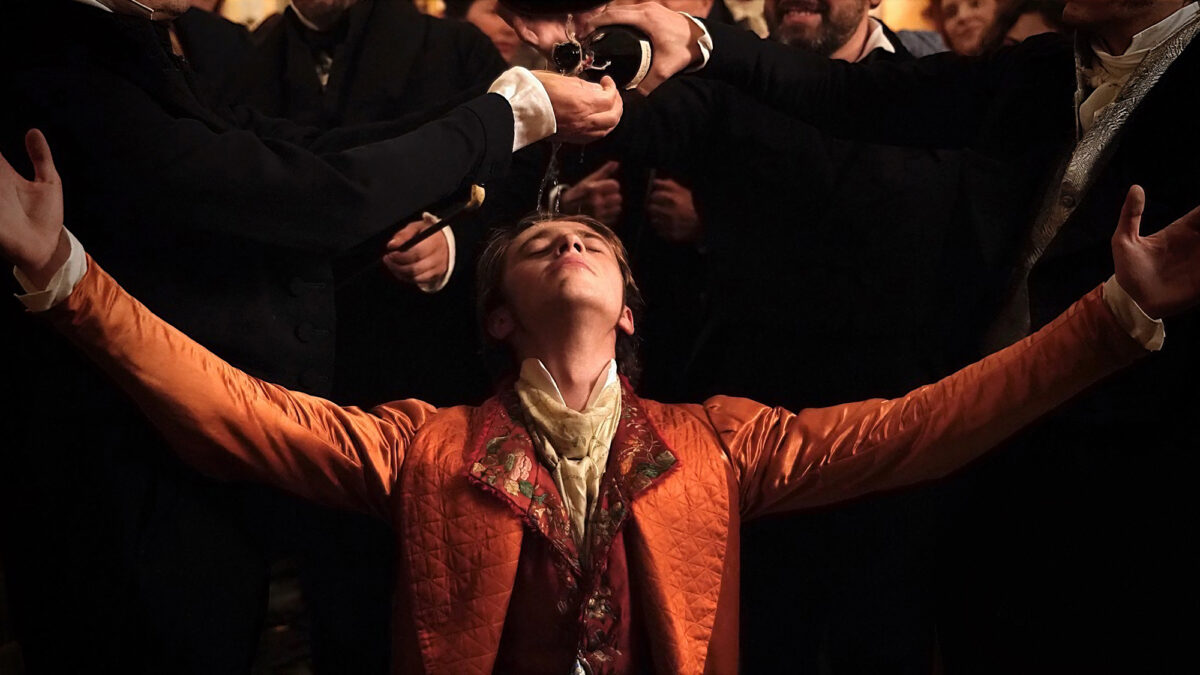 Xavier Giannoli’s truly sumptuous adaptation of Honoré de Balzac’s novel Lost Illusions is prescient, modern, and yet thoroughly grounded in its time. Giannoli, who wrote the screenplay,   shared adaptation credit with Jacques Fieschi and Yves Stavrides. This film recently swept the 2022 César Awards, but more on that later. 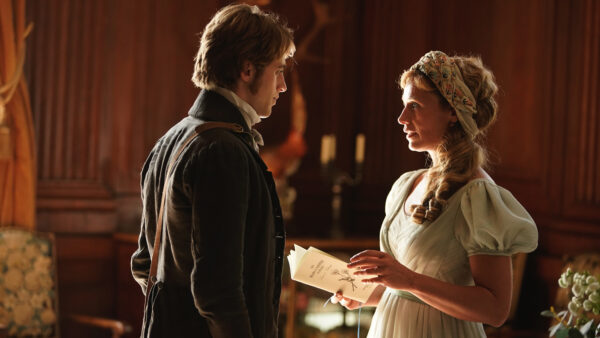 A classic Balzac story, it’s not a spoiler to say that it won’t end well. This is the post Napoleonic restoration period in France where the monarchy has been reestablished under Louis XVIII and the aristocracy has avariciously resumed their pursuit of fortune and power. A middle and upper middle class, born during the Napoleonic era, looks toward the goals of success built on the accumulation of wealth, the very definition of nouveau riche. Even in the provinces, money reigns supreme even if improvement in social status is beyond reach whether through lack of education, family history, or the dictates of the ruling class. The aristocrats still own almost all  the land and live by the motto of “noblesse oblige,” provided the merchants and farmers don’t overstep their bounds.

But Paris is nirvana for every striving youth and Lucien Chardon is no exception. Lucien, a sensitive, poor poet apprenticed to his brother-in-law’s printing press, is convinced that he deserves better. An orphan, he tries to distance himself from his father, a common pharmacist, and adopts his mother’s aristocratic maiden name, de Rubempré. Lucien has attracted the attention of the queen of Angoulême society, Baroness Louise de Bargeton. Louise, married to a much older man, has begun a liaison with Lucien who dedicated his beautiful volume of poetry to her. Her efforts at creating a literary salon are unsuccessful because the merchant class of this small city far from Paris shows no interest in intellectual activities. Determined to escape the stifling confines of her life in the provinces, she decides to go to Paris where she has an entrée to high society through her cousin, the all powerful Marquise d’Espard. Secreting Lucien in her carriage, she envisions a better, more satisfying life for them both. 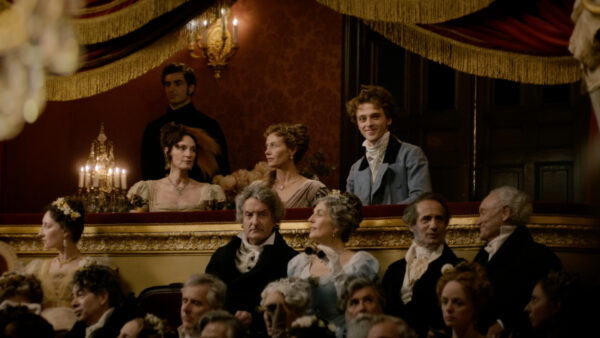 Lucien is thrilled. Convinced he will shine in Paris, he sets out to reinvent himself as what he imagines is the dress and style of a young aristocratic poet. He drops his father’s last name Chardon and adopts his mother’s royal maiden name de Rubempré. His effort is in vain and highlights his ignorance. With what he thinks is a stylish new outfit and haircut, he arrives at the Opera for his rendezvous with Louise. Unaware of the snickers he has attracted, laughingly referred to as Madame Bargeton’s hairdresser, Louise is told in no uncertain terms by the Marquise that she must immediately dispose of Lucien or risk scandal and ostracism. 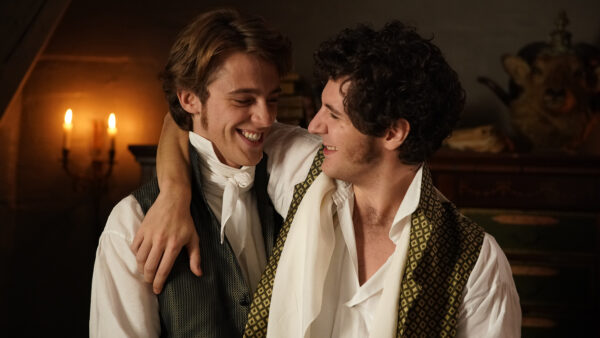 The confused and penniless Lucien is suddenly alone in Paris without a sponsor or friends. The rube of Angoulême is out of his depth. Enter Etienne Lousteau, a failed playwright and successful journalist. As he points out, if you’re going to fail, you may as well fail in Paris. Soon, under the wing of Lousteau, he is introduced to the wild west of tabloid journalism where editorial policy was dictated by who was paying.  A quick learner and adept at the fast, clever, vicious writing necessary to succeed, he joins the ranks of the newspaper Le Corsaire. Liberal or Royalist? It depends on the bottom line. Everyone lined up to buy articles. A positive review, a negative review? Depends on the price. “To write a review, it’s best not to read the book. You might be influenced” After all, “a bon mot is better than a good book.”

Editorial policy? The probable is upheld as truth. Print rumors and then denials. Hence two events to cover. It is the dawning and apotheosis of fake news. There is no restraint and under Lousteau’s tutelage, Lucien becomes rich. Flush with cash and a poison pen, he can take revenge on Louise and those who ridiculed and rejected him.

Lucien is an avid student and Lousteau is eager to deflower him, introducing him to the demi-monde of the boulevards where the prostitutes, courtesans, and harlots reign supreme in the little variety shows that spring up at the deliciously baudy theaters of the district. It is here he finds both redemption and damnation, falling irrevocably in love with Coralie, a talented star of the little plays and variety shows so popular at the time. A girl of the streets, sold by her mother at the age of 13, and yet, at 20, still retaining an innocence and delight in the promise of a better life, she is swept off her famous red stockings by Lucien. 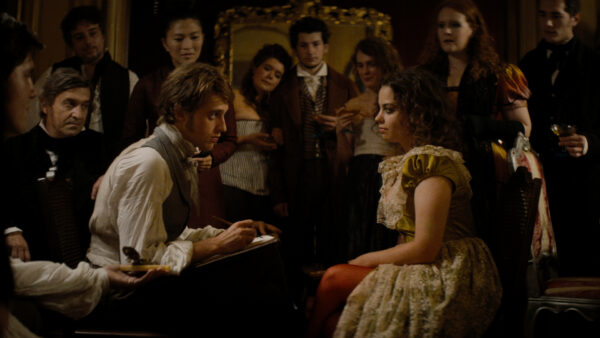 Clichés become clichés for a reason and Lucien’s story is as old as the Greeks for he is nothing if not the embodiment of Icarus flying too close to the sun. Enraged by the stinging, satirical articles he writes about the aristocrats, they resolve to stop him with the one power they hold over him — his name. He has no right to claim his mother’s heritage but perhaps they might be able to change that if he stops writing about them.

Always dark at the edges, Lucien’s story blackens increasingly closer to the center as loyalty turns to betrayal, love to revenge. To reveal more might lessen the thrill and joy of discovering this world where everyone is a victim and all seek revenge.

The casting is pitch perfect and breathtakingly brilliant. Benjamin Voisin, a relative unknown playing Lucien, won the César as Most Promising Actor. The depth and range of his acting is astonishing and always surprising. His Lucien is innocent, arrogant, naive, cynical, all-knowing and clueless, sometimes simultaneously. He elicits both scorn and sympathy. This is surely the beginning of a stellar career. Salomé Dewaels as Coralie, is wide-eyed innocence and hope that contrasts with her actual status in life. She is the very embodiment of the whore with a heart of gold who, in the end, is worth more than any of them. The voluptuousness of her body and the fullness of her lips are contributing factors to her character, but it’s those large, deep, warm eyes that convey everything you need to know. For this role she was nominated for Most Promising Actress.

Vincent Lacoste (“Irma Vep”) as Lousteau is a whirling dervish of lost ideals and disenchantment, credibly leading his friend Lucien down the path to hell and then abandoning him there. The speed of his delivery, the envy in his eyes, all reveal an actor of great depth; something recognized when he won the César for Best Supporting Actor.

Cécile de France (“The Kid with a Bike,” “Call My Agent”) as Louise has the unenviable task of playing the thankless role of catalyst for the action. She is given little to do other than start the main character down his journey and be part of its end. Her eyes convey the sympathy we feel even though her actions show her cowardice. Jeanne Balibar (“Irma Vep”) as the malevolent Marquise d”Espard has the voice and eyes that drip venom while her thinly veiled smile conveys a false sense of hope. She is a veteran actress whose nuance is her calling card. Both de France and Balibar were nominated for Best Supporting Actress. Xavier Dolan, as Nathan, Lucien’s rival and moral conscience, was also nominated as Best Supporting Actor.

In small but show-stopping roles are Louis-Do de Lencquesaing (“Spiral”) as Finot, the owner of The Corsaire, and Gérard Depardieu as Dauriat, the illiterate vegetable vendor turned all-powerful book publisher. Each, a master of his trade, takes over the screen easily and propels character and story deeply and effortlessly.

“Lost Illusions” cleaned up at the 2022 César Awards with other trophies going to Rito Dupire-Clément for a Production Design that evokes early 19th century Paris from the opulent chateaux and salons, to the muddy streets where you are overwhelmed by imagined smells and rotten tomatoes that you can feel go splat. Pierre-Jean Larroque won for Costume Design, which perfectly recreates the era and all strata of society. Christophe Beaucarne won for the lush Cinematography of warm colors and stationery images that seem to wash over you. Editing, Sound, and Visual Effects were also nominated. Fieschi and Giannoli received the award for Best Adapted Screenplay, a true tribute because the French are particularly judgmental about the interpretation of classic literature. Although Giannoli was only nominated as Best Director, “Lost Illusions” was named Best Film of the year.

Available August 16 On Demand and on all major digital platforms.