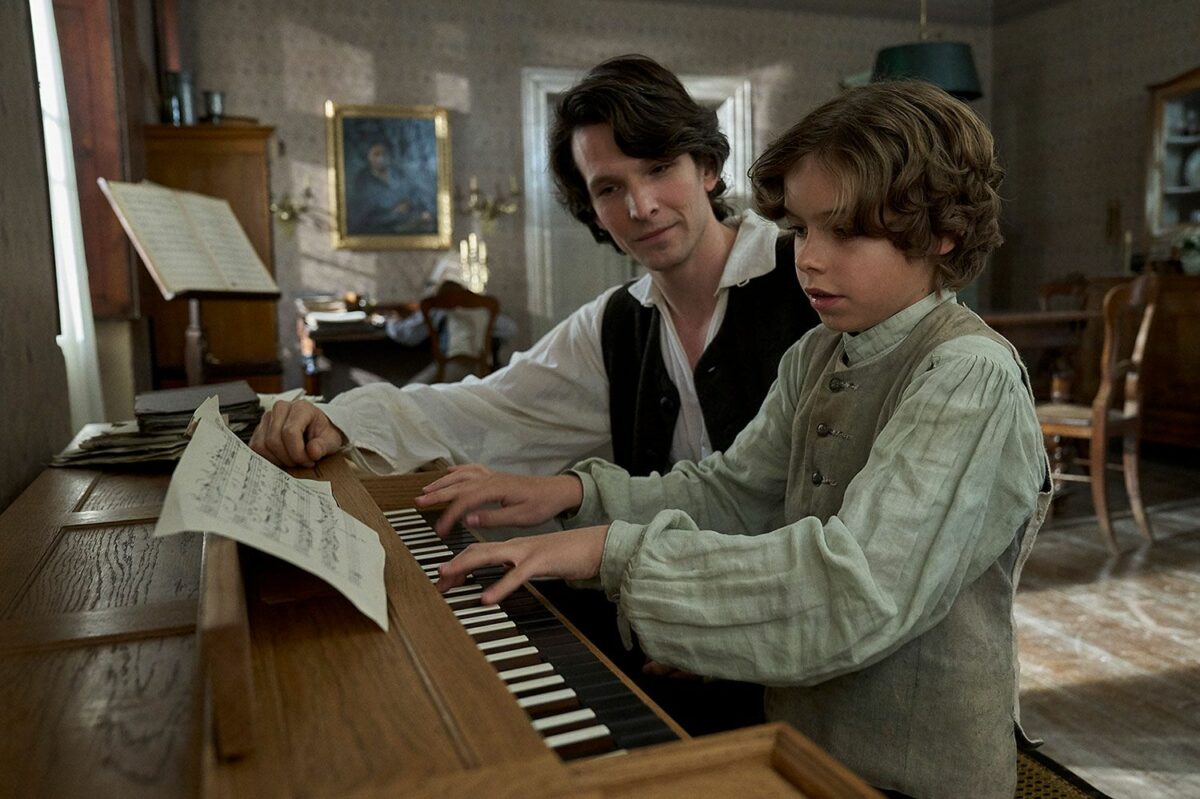 Stein has chosen to frame the history of one of the greatest composers ever to live (if not the greatest, depending on where you rank Bach and Mozart) by juxtaposing the last months of his life against his early story. If this sounds like the interminable use of flashbacks, it is not; it’s much more complex and interesting. Although much is commonly known about the man and artist – that he carried a torch throughout his life for the woman he loved and lost and that he was completely deaf by the time he wrote his Ninth Symphony, there was so much more.

The film opens on Beethoven decamping from Vienna to the countryside after the seeming failure of his last symphony, the Ninth. Accompanied by his nephew and ward, Karl, they are bound for the villa of his brother Johann. It is as much to shield his nephew from scrutiny and possible institutionalization after a suicide attempt, as it is to find haven from financial and health difficulties. Close to his brother, but disdainful of his sister-in-law, it is a harbinger of tensions to come when Ludwig and Karl are met with a farm wagon instead of the carriage he had been promised.

Working on his latest musical piece, one deemed too dissonant and difficult to play by his publisher, we cut to a time when he was a piano prodigy at the age of 8 in Bonn, the provincial state and capital of the Electorate of Cologne ruled by the Archbishop, the prince-elector. Ludwig, or Louis as he was sometimes affectionately called, was groomed by his father Jean, a semi-successful opera singer with the local, Elector-sponsored opera and orchestra, to be the second coming of Mozart. A string of increasingly more important teachers guide young Ludwig to more successful local appointments until the local leaders of the municipality sponsor him to go to Vienna and work with Mozart. 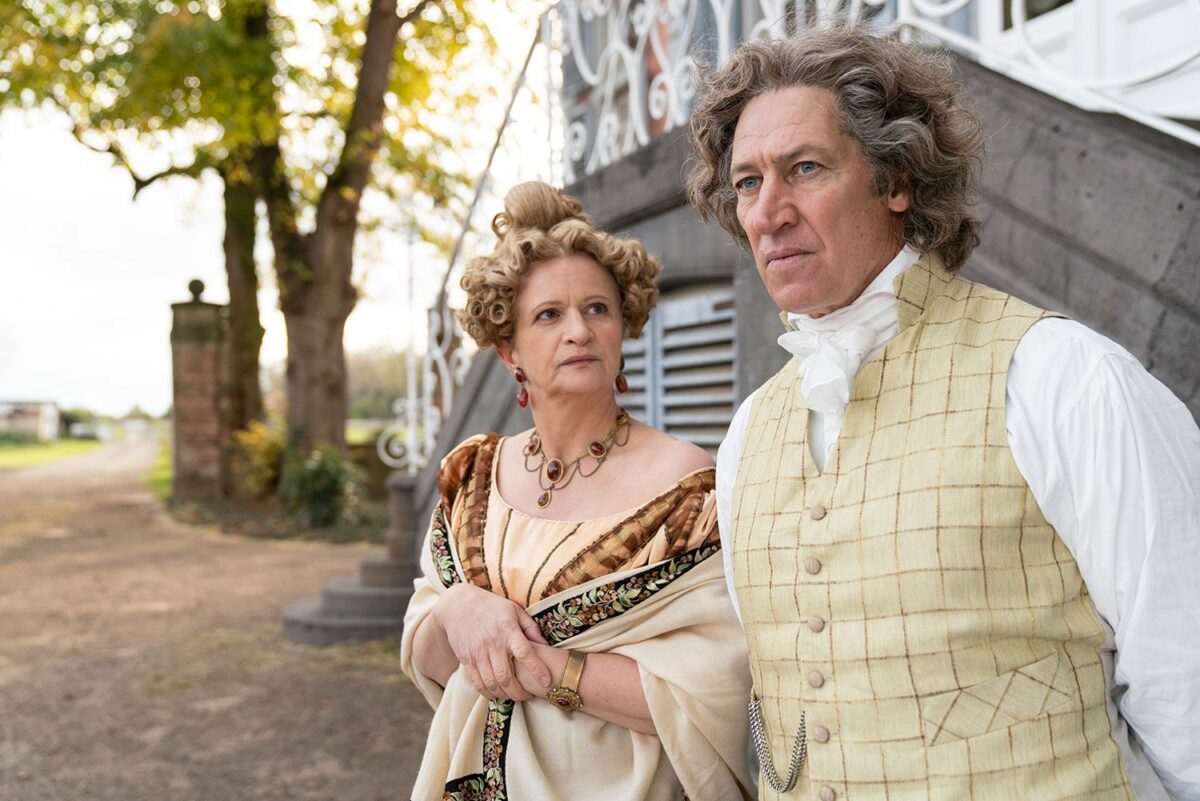 Tobias Moretti as Beethoven and Johanna Gastdorf as his sister-in-law Therese in “Louis von Beethoven.” Photo courtesy of Eikon Media and Film Movement.

Returning to the aged Beethoven, his irascibility is emphasized in the imperious way he treats all around him. He is well aware of his importance and refuses to integrate into family life, regardless of their generosity and his imposition upon them. Among the possessions he values most is the small portrait of a beautiful young woman. As he sits in his room, he composes a letter to a long lost but never forgotten friend; presumably the young woman in the portrait.

Cutting to a teenaged Beethoven, now the toast of Bonn and breadwinner of his much diminished family. With the death of his mother, closely followed by that of another sister who joined a string of other siblings who died in childhood, Jean descended into acute alcoholism and neglected his financial and emotional duties to his remaining sons. Young Ludwig, however, had increased in prestige despite the debacle of his short period with the profligate Mozart. Foremost among his supporters was the upper class Helene von Breuning, the mother of Eleonore, one of his piano students and a surrogate mother to Ludwig. Eleonore and Ludwig clearly adore each other. Although Madame von Breuning recognizes his genius, it is his lack of social status that determines her next steps. It is she, primarily, who schemes to separate them.

Given a choice between a return to Vienna, sponsored by von Breuning, this time to study with the more stable Josef Hayden, or remain in the backwater of Bonn, he chooses a future we are all aware of. Eleonore, compliant to her mother’s wishes, will go on to marry an aristocrat; and Beethoven succeeds beyond anyone’s wildest imagination. But he seems always haunted with the feeling of “what if” whenever he looks at the small framed portrait that had been a gift of Eleonore during a time when all seemed possible.

The acting is excellent led by the three actors playing Beethoven at various ages: Colin Pütz as a child; Anselm Bresgott as a teenager; and most importantly Tobias Moretti as an old man. Moretti gives the aged Beethoven the hard edge of a man whose greatness is assured and the vulnerability of someone who is angry by what has been dealt him at the end of life.

Niki Stein has adeptly created a framework that never feels like a series of flashbacks but instead an opening into the time and events that shaped the old man in front of us. Much of this is also due to an experienced editor, Jan Pusch. The cinematography by Arthur W. Ahrweller artfully recreates both the German countryside and Viennese city life, all of which was enhanced by the skills of Production Designer Benedikt Herforth and Costume Designer Veronika Albert. The film can seem slow and longer than its 2 hour running time, but it is still worth it and you’ll know a lot more about the man than when you started. It is, nevertheless, a fitting tribute to the genius who was born 250 years ago, baptized, fittingly enough, on December 17, the day of this review.

Opening December 16 at the following Virtual Theaters: The Laemmle and our local South Bay Film Society