Magic Realism: This Way to Hogsmeade 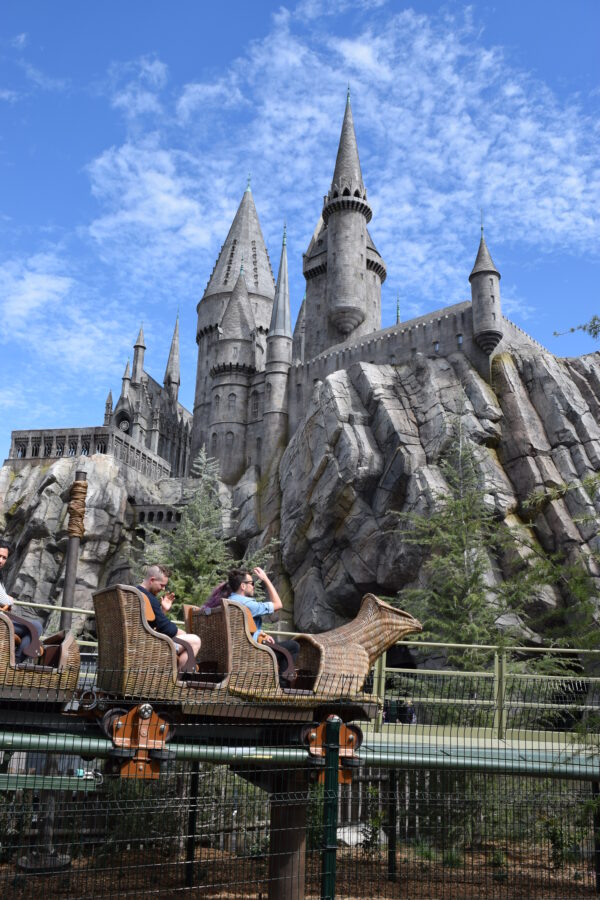 The Flight of the Hippogriff touches down, with Hogwarts Castle in the background. Photo 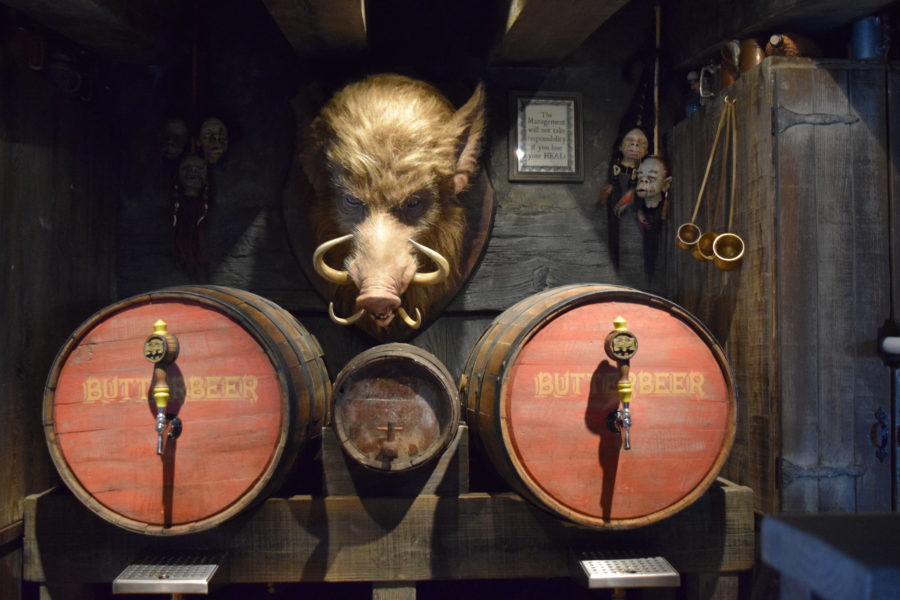 Who wouldn’t want to stop here, at the Hogsmeade Pub, to quench their thirst? Photo

The seven novels by J.K.Rowling, and the eight films that broadened their appeal, have been a closed chapter for five years, but in a few days the Hogwarts Express will officially pull into the station at Universal Studios. 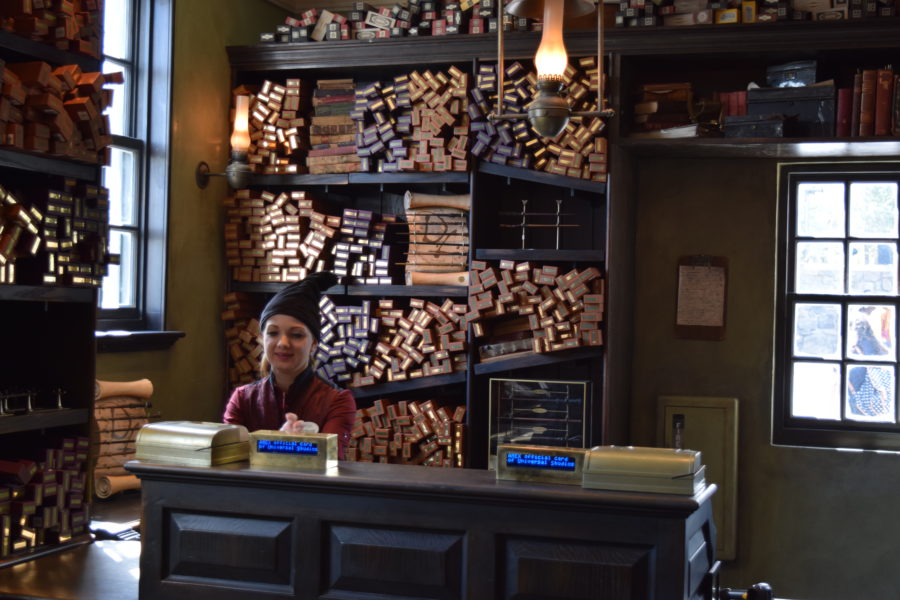 In need of a magic wand? Ollivander’s Wand Shop has one for every wizard or sorceress. Photo

It’s the most anticipated Southland theme park attraction since Cars Land motored its way into Disney’s California Adventure four years ago. The site was formerly occupied by the Universal — later Gibson — Amphitheatre, where many of us may have seen the best rock concerts of our lives.

But with the wave of a magician’s wand, all that has vanished.

Although the grand opening is set for Thursday, April 7, the public has had opportunities to wander through the narrow cobblestone streets of Hogsmeade Village, and then to wend its way up to Hogwarts Castle. 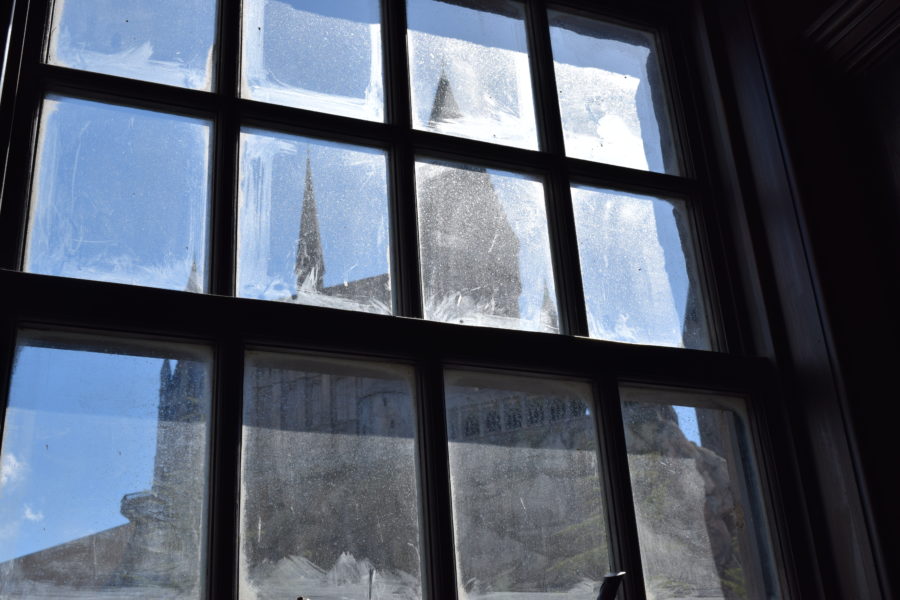 From my lodgings, the view of Hogwarts Castle. Photo

When we pass beneath the weathered arched gateway into the world of Harry Potter and his cohorts (Hermione Granger, Ron Weasley, and so on), we’re immediately enclosed by what seems to be an eccentric Old World community with some Edward Gorey overtones (Nymphadora Tonks and Xenophilius Lovegood?). To our immediate right stands the train conductor near the old-fashioned locomotive which has theoretically just brought us to Hogsmeade from Platform Nine and Three-Quarters at King’s Cross station. Just imagine if that had really been the case, as it often is when we travel across Europe by train. Inside the station you can sit in a replica compartment of the Hogwarts train and for $25 (yes, your U.S. currency is good here) you’ll be photographed and framed. Framed in a good way. 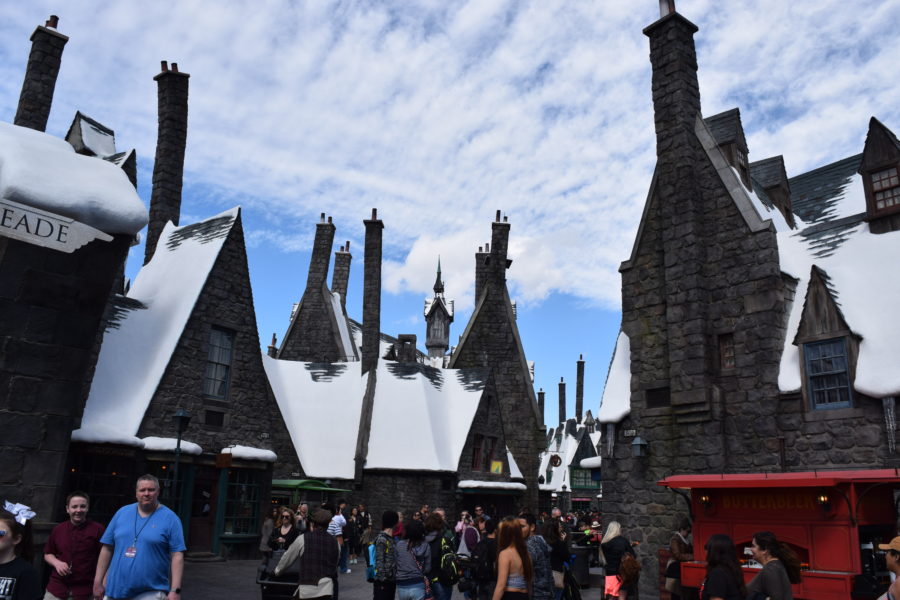 Market day in Hogsmeade Village. After five days, I hired a carriage and driver so I could return to Hermosa Beach. Photo

Hogsmeade Village looks the part, authenticity was one of the goals, with eclectic storefronts and their tantalizing names: Dogweed and Deathcap, Madam Puddifoot, Spiritwitches, Tomes and Scrolls, and Ceridwen’s Cauldron Shop, to list a few. Many of these are simply storefronts and not stores, but the actual eight shops, with Filch’s Emporium of Confiscated Goods and Wiseacre’s Wizardry Equipment among them, are largely well-disguised souvenir shops. There are some 600 different kinds of Harry Potter merchandize tucked away in the bowels of this little town.

The one that stands out is Ollivander’s Wand Shop, where it’s the wand that chooses the wizard instead of the other way around. This is going to be a money-maker, especially at $40 or $48 for the interactive wands that actually make things hop, skip, jump or slither at 11 hotspots throughout the village. The wand shop, twice as large as its counterpart in Orlando (a third Harry Potter world has opened in Osaka, Japan), is stacked floor to ceiling with more kinds of wands than you can shake a stick at. They do seem pretty cool, and I’m certain they’ll be flying off the shelves. 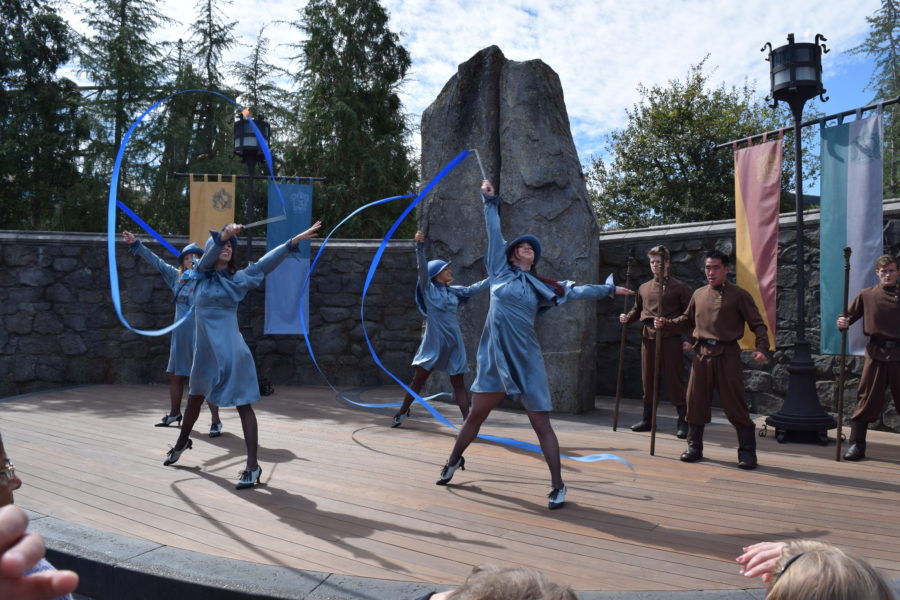 I attended the Triwizard Spirit Rally in order to evaluate the students of the Durmstrang Institute and Beauxbatons Academy of Magic. Photo

Across the lane is the Owlery, from where one can send U.S. mail with a Hogsmeade postmark. Attached to it is an open-air, covered barn with animatronic owls in the rafters and owl droppings below on the cobblestone (painted to look like the real McCoy). This is a good place to rendezvous with family or friends, and to escape the blistering sun or, on the day I visited, pouring rain (and, judging from the snow on the rooftops, it must have been very cold the day before).

Back to the other side for the Three Broomsticks, a cavernous restaurant with half-timbered beams and a tall, gabled roof, just the spot to read Beowulf or Chaucer (or J.K. Rowling) while waiting for or wolfing down a hearty meal of roast beef, fish and chips, and shepherd’s pie, with maybe a toffee pudding for dessert and a butterbeer to wash it all down.

Butterbeer must be the official brew of Hogsmeade, a non-alcoholic drink that tastes like butterscotch and cream soda, and sells for $5.50 regular or $6.50 as a kind of slush. It comes in a plastic mug that you can rinse out, take home, and reuse. If it’s real beer (or spirits) that you’re craving, the Hogsmeade Pub adjoins the Three Broomsticks and they serve such curiosities as Dragon’s Scale and Fire Whisky.

Throughout this enchanted land there are original props from the Harry Potter movies. Those with eagle eyes (or owl eyes) are sure to find them. 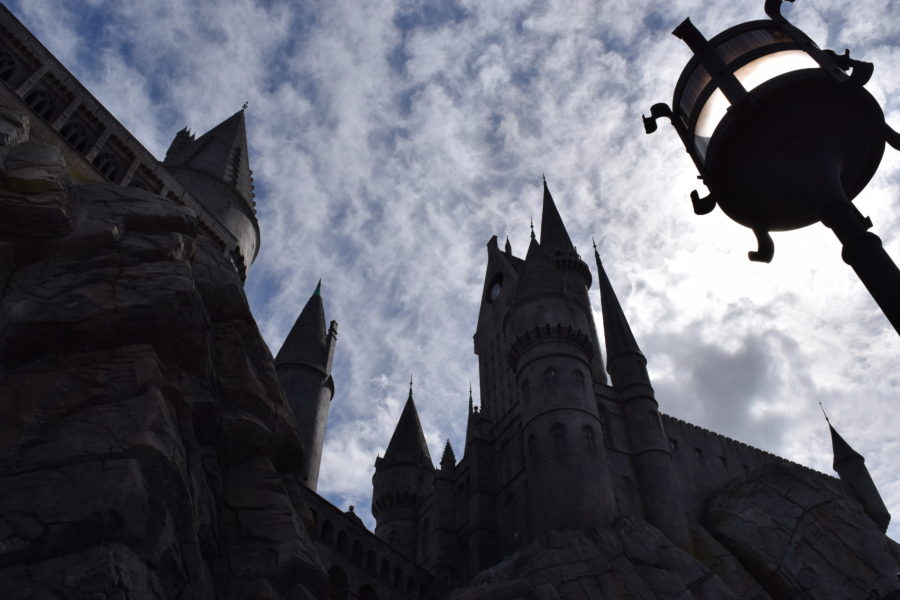 Ominous? You bet! But this might be the last thing you see before entering Hogwarts Castle. Photo

Between the cluster of shops and Hogwarts Castle is a performance area where we can gather and listen to the Frog Choir, which is just as it sounds, or attend the Triwizard Spirit Rally which highlights the advanced students of the Durmstrang Institute and Beauxbatons Academy of Magic.

Is this the ride of a lifetime?

At the top of the incline we can go left or right, the latter leading to the Flight of the Hippogriff, a family roller coaster that one approaches by walking past Hagrid’s hut (remember Rubeus Hagrid, the big guy with the beard?), and from within we can hear his barking dog, Fang. We climb into simulated wicker basket seats and the roller coaster is off and… what, we’re back so soon? Very quick and not so challenging: I guess the Hippogriff tires easily. 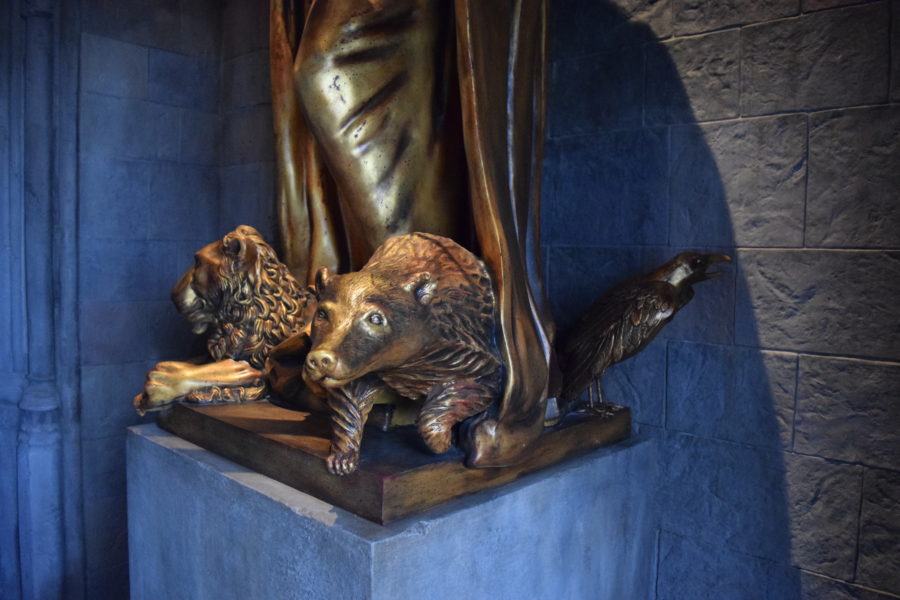 Details everywhere as we wend our way towards “Harry Potter and the Forbidden Journey,” a thrilling dark ride that will knock your socks off. Photo

But people won’t be streaming uphill for the Hippogriff anyway; they’ll be making a beeline for Harry Potter and the Forbidden Journey, which is one of the coolest dark rides on the planet.

Before reaching the attraction itself one needs to pass through an entranceway guarded by towering winged boars. Then the long, twisting and turning footpath leads to the Dungeon Corridor, winds past the Mirror of Erised and Albus Dumbledore’s office, through the Defence Against the Dark Arts classroom and the Gryffindor Common Room, plus other locales I was too scared to notice. All of this is to keep us from becoming overly impatient if our waiting time is in the dozens of minutes — which it will be for the next few months.

And then? The moment of truth…

The Flight of the Hippogriff touches down, with Hogwarts Castle in the background. Photo

Each vehicle sits four riders, all side by side and secured so well that any first-time passenger is sure to be a bit apprehensive. I’ll spare the details of the ride itself, except to say that we swoop alongside Harry Potter in a Quidditch match (ah, those flying broomsticks), get snapped at by a dragon or two, and are besieged by Dementors. It’s exhilarating, to say the least. 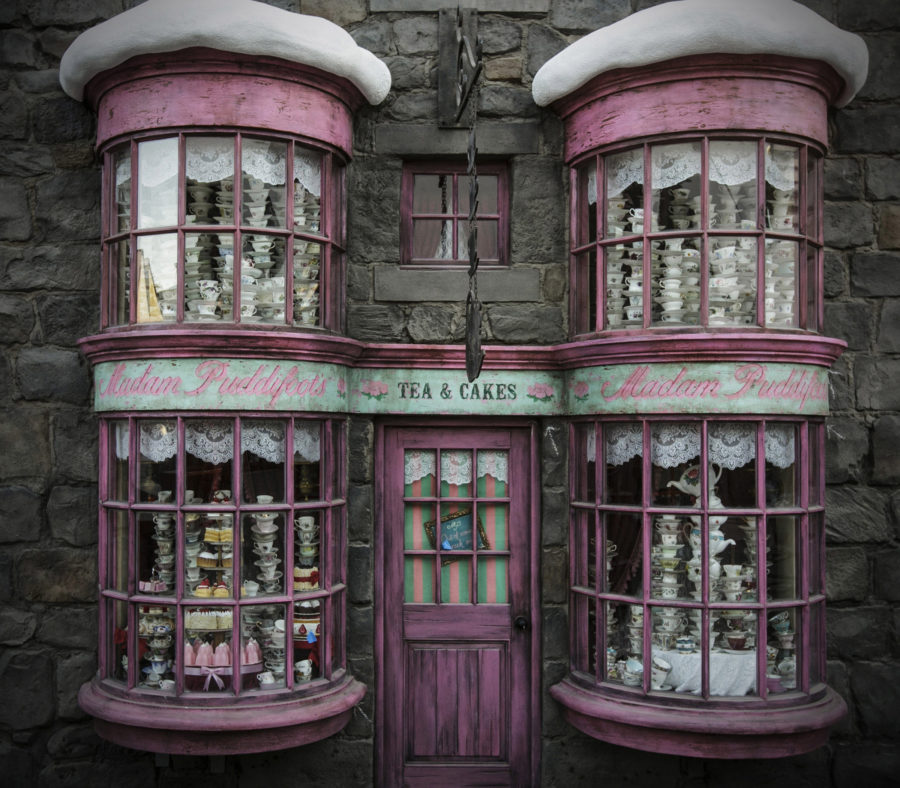 Madam Puddifoot’s Tea & Cakes, one of the many storefronts you’d like to step into. Photo courtesy of Universal Studios

What makes Harry Potter and the Forbidden Journey special is that it’s more than a simulated dark ride but less than a roller coaster (a robo coaster might be the right word since the pivoting and turning comes courtesy of a large robotic arm). The 3D goggles really do make it seem that each of us is in the very heart of the action.

As many already know, Universal Studios offers a great deal more than Hogsmeade Village and Hogwarts Castle, and the park has grown tenfold in sophistication since the 1970s when the Studio Tour Tram was pretty much it. This latest addition is yet another feather in Shrek’s cap (yes, he’s here too), and it’ll be quite the buzz for months to come.

The Wizarding World of Harry Potter opens on April 7 at Universal Studios Hollywood. Ticket prices, parking, directions, etc., are on the park’s website. Updates are at UniversalStudiosHollywood.com/HarryPotter.